(UroToday.com) At the 2021 European Association of Urology annual meeting Game Changing session, Dr. Tom Powles presented results of the KEYNOTE-564 trial evaluating pembrolizumab versus placebo as adjuvant therapy for patients with RCC. In 2018, kidney cancer was responsible for 175,000 deaths worldwide. Nephrectomy is the standard of care treatment for locoregional RCC, however, there is no globally accepted standard adjuvant therapy supported by high levels of evidence. Studies of adjuvant immunotherapy with cytokines have yielded negative results and VEGF-targeted therapy has not shown a consistent benefit in the adjuvant setting. Importantly, nearly half of patients eventually experience disease recurrence after surgery, with risk factors including tumor stage/size, nodal involvement, and nuclear grade. Patients with M1 stage and no evidence of disease after resection of oligometastatic sites are also at high risk of relapse.

KEYNOTE-564 is a phase III multicenter trial of pembrolizumab versus placebo in patients with histologically confirmed ccRCC. Risk groups were defined as follows:

The trial schema for KEYNOTE-564 is as follows:

Patients had undergone surgery ≤12 weeks prior to randomization, had no prior systemic therapy, and had ECOG performance status 0 or 1. Study treatment was given for up to 17 cycles (approximately 1 year). The primary endpoint was disease-free survival (DFS) per investigator assessment in all randomized patients (intention to treat population). Overall survival (OS) was a key secondary endpoint. Safety/tolerability were secondary endpoints, assessed in all treated patients.

The first prespecified interim analysis was planned after ~265 DFS events and a minimum follow-up of 12 months from the last participant enrolled. After 15 months of follow-up, 260 DFS events had occurred (78% of the planned final analysis) and 51 OS events had occurred (26% of the planned final analysis). The study had 95% power to detect a HR of 0.67 at alpha = 2.5% (one-sided) for the primary endpoint of DFS for ~990 patients. DFS was tested first at alpha = 2.5%, then alpha was passed to OS if null DFS hypothesis was rejected. The DFS and OS were estimated by the Kaplan-Meier method, and HRs and 95% confidence intervals were estimated using a stratified Cox proportional hazard model. Between-arm differences were assessed using the log-rank test. 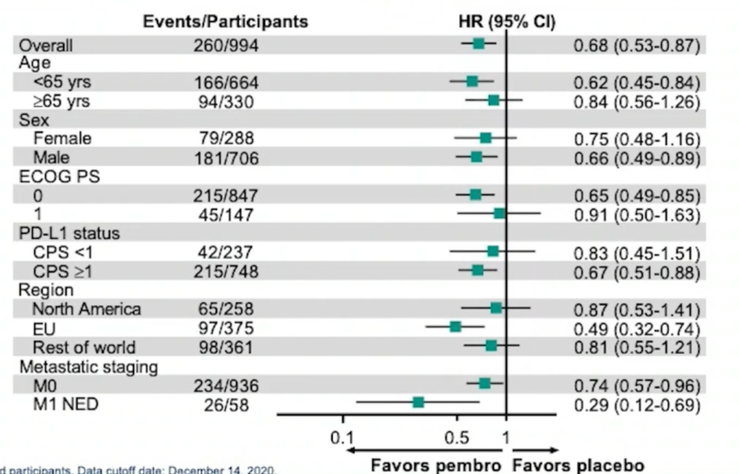 Dr. Powles concluded this presentation of the KEYNOTE-564 trial with the following take-home messages: