(UroToday.com) As part of a plenary presentation at the European Association of Urology (EAU) Virtual 2020 meeting assessing “Testis cancer and surgical andrology,” Robert Hamilton, MD, MPH, FRCSC, examined whether miRNA-371 is ready for “prime time” as a testis cancer biomarker.

He began by giving an overview of the landscape of testis cancer in which better biomarkers would aid patient care. These run the gamut from diagnosis and early staging to the provision of chemotherapy and post-chemotherapy retroperitoneal lymph node dissection (RPLND), as well as to reduce the burden of imaging.

MicroRNA (also called miRNA) are small, single-stranded non-coding RNA fragments. They interact with messenger RNA (mRNA) to influence post-transcription gene expression through translational repression and mRNA degradation. They have been studied as biomarkers in a range of human conditions, including many cancers. This is because miRNA expression is dysregulated in the cancer process with amplification and deletion of miRNA genes; aberrant transcriptional control; epigenetic changes; and altered biogenesis. As suggested by both amplification and deletion leading to carcinogenesis, miRNA may function as either oncogenes or tumor suppressors.

In 2006, Voorhoeve and colleagues were the first to report that miR-371-373 cluster was highly expressed in testis cancer. Subsequent work demonstrated that both the miR-371 cluster and the miR-302 cluster were overexpressed in testis cancer regardless of tumor type (non-seminomatous germ cell tumor (NSGCT) or seminoma), NSGCT subtype, pre- or post-pubertal disease, and anatomic site (gonadal vs. extra-gonadal tumor).

Beyond implication in the relevant biologic processes, miRNA have characteristics which make them well suited as biomarkers: these are detectable in the bloodstream, stable due to their resistance to degradation, and have a short half-life. With a half-life in the range of 3-7 hours, levels fall to 2.6% of pre-orchiectomy levels within 24 hours of surgery. This half-life is much shorter than traditionally utilized biomarkers such as human chorionic gonadotropin (HCG) and alpha-fetoprotein (AFP), which have half-lives of 36 hours and 5-7 days, respectively. 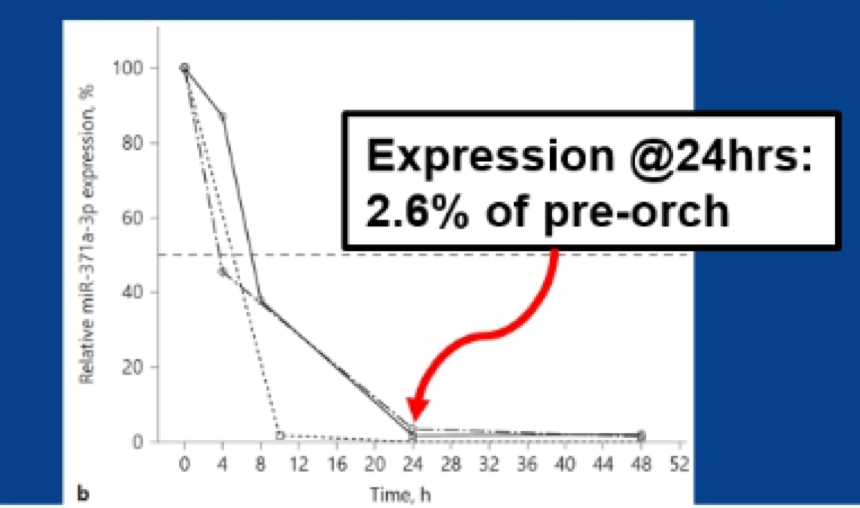 Assessing the miR-371 cluster, analysis of miR-371a-3p performed as well in terms of area under the curve (AUC) for the receiver operating characteristic (ROC) curve as a panel of all four miRNA combined (AUC 0.93, 95% confidence interval 0.87 to 0.98).

Across the board, the area under the curve (AUC) of the miRNA derived risk prediction models is between 0.87 to 0.97. Thus, we can conclude the miR-371a-3p is very good at detecting when GCT is present, compared to when it was not.

Assessing patients who received chemotherapy and subsequent post-chemotherapy RPLND, Dr. Hamilton discussed a study from his group led by Dr. Ricardo Leao which assessed levels of miR-371a-3p, miR-373-30, and miR-367-3p following orchiectomy but before chemotherapy and following chemotherapy but before RPLND. They compared these levels to clinical characteristics, conventional tumor marks, and PC-RPLND pathology. Expression of miR-371A-3p demonstrated significant differences for patients with viable GCT at PC-RPLND compared to teratoma or fibrosis/necrosis.

The authors then assessed whether serum miR-371a-30 could be useful in guiding treatment decisions. For example, among patients with 1-3cm masses, the authors used the miRNA assay to predict pathology: among 18 patients with a negative miR-371A-3p assay, 8 had teratoma, 10 had necrosis/fibrosis, and none had viable GCT while among 21 with a positive miRNA assay, 6 had viable GCT, 5 had teratoma, and 10 had necrosis/fibrosis. These data suggest that miR-371a-3p can exclude viable disease in patients following chemotherapy. However, teratoma remains a surgical disease so it is less clear whether this can accurately guide treatment.

Dr. Hamilton then highlighted data from Dr. Lafin and colleagues who assessed the association between miR-371a-3p and viable germ cell tumor in patients undergoing RPLND, without prior chemotherapy.

Interestingly, tissue-based miRNA assay has found elevated less of miR-375 in teratomas. Thus, if this is validated in serum, the combined use of this with miR-371a-3p may allow for a more comprehensive assessment. However, there are concerns about the reliability of miR-375 to discriminate teratoma.