Dr. Nicol began by highlighting the definition of the gold standard which, according to the Collins English Dictionary, as “the supreme example of something against which others are judged or measured.”

He then moved to indications for RPLND which, in non-seminoma, include stage 1 high-risk disease (e.g. tumors with lymphovascular invasion), stage 2 disease with normal markers, and post-chemotherapy residual masses.

Examining the data for primary robotic RPLDN, Dr. Nicol highlighted that these are small studies in patients with generally low-risk disease, characteristics by a vast majority of patients with clinical stage 1 disease and a small proportion with LVI. This assessment is supported by the fact that the vast majority (>80%) of these patients had pN0 disease. 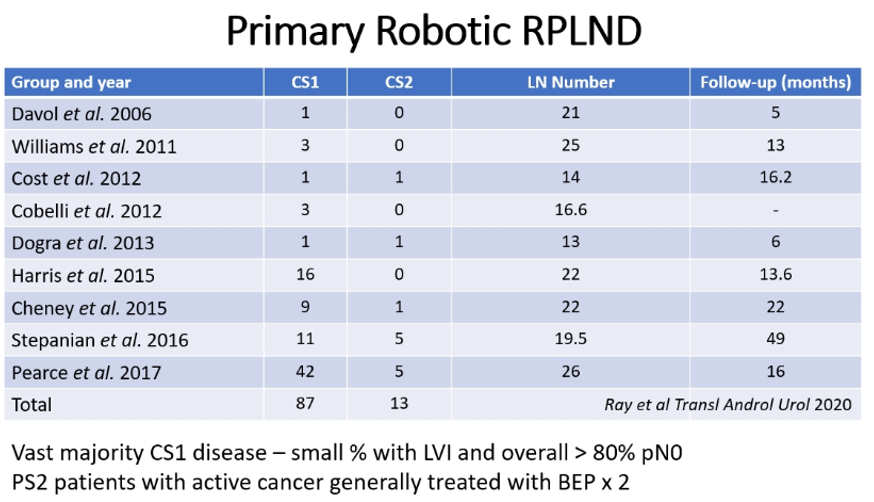 In the setting of post-chemotherapy residual masses, robotic RPLND is uncommonly performed and presents may challenges, highlighting the importance of centralization of centers of excellence with high volumes. The complexity of post-chemotherapy RPLND was highlighted by Dr. Nicol emphasizing that vascular procedures are not uncommonly needed, including venous reconstruction/replacement in 10%, venous intraluminal tumor in 5%, arterial replacement in 2% and arterial repair in 10%. These procedures are often unpredictable and may be required in an ad hoc basis. Further, the disease extent (including retrocrural disease) may necessitate adjunctive organ resection including bowel, kidney, and liver. Dr. Nicol raised questions of both the safety and feasibility of such procedures in the setting of RPLND. 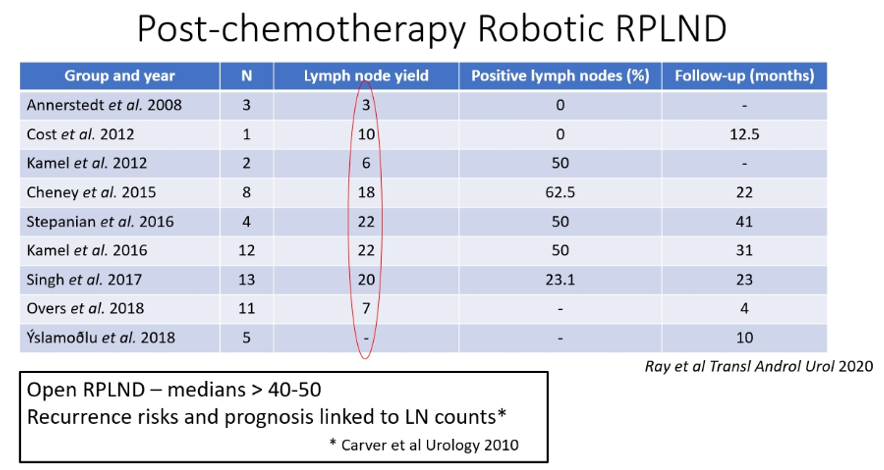 Dr. Nicol concluded by highlighting that robotic RPLND appears, at most, technically feasible in selected patients with low volume disease and a good prognosis. However, there are concerns regarding the adequacy of resection, technical feasibility including adjunctive resections, and the lack of oncologic data. Thus, he concluded that open surgery should be the preferred option for the majority of patients for whom RPLND is indicated.