(UroToday.com) As part of the “Game-changing Session 4” plenary session at the European Association of Urology (EAU)  Virtual Annual Meeting, Dr. Josefsson presented data from the Scandinavian Prostate Cancer Group (SPCG) trial 14, a prospective, open, multicentre, phase II clinical trial of bicalutamide alone or with the addition of docetaxel in nonmetastatic prostate cancer with a rising PSA.

Dr. Josefsson highlight first the study schema. Patients could be enrolled in SPCG-14 if they had PSA relapse after curative intent radiotherapy or radiotherapy or if they had not received previous curative-intent treatments. The inclusion criteria differed somewhat in these three groups but in each case required a PSA doubling time of less than 12 months. Further details of inclusion criteria are highlighted in the figure below.

The primary endpoint was progression-free survival, defined as a PSA of more than 2mg/mL above nadir, metastasis, or death due to any cause.

Patients were accrued at 19 sites across Sweden, Denmark, Finland and the Netherlands with 5 sites enrolling 269 (78%) of all included patients.

As would be expected in a randomized trial in this disease space, median age was 68 years and most had ECOG 0 performance status (91%). The majority at PSA doubling time of <6 months (62%) while the remainder had PSA doubling time of 6-12 months. The median absolute PSA value was 3.8 ng/mL (interquartile range 1.8 to 9.6 ng/mL). The majority of patients had Gleason grade 7 or lower (73%) with 26% having Gleason grade 8 or higher. Nearly 90% (89.3%) of patients had curative-intent treatment before inclusion. 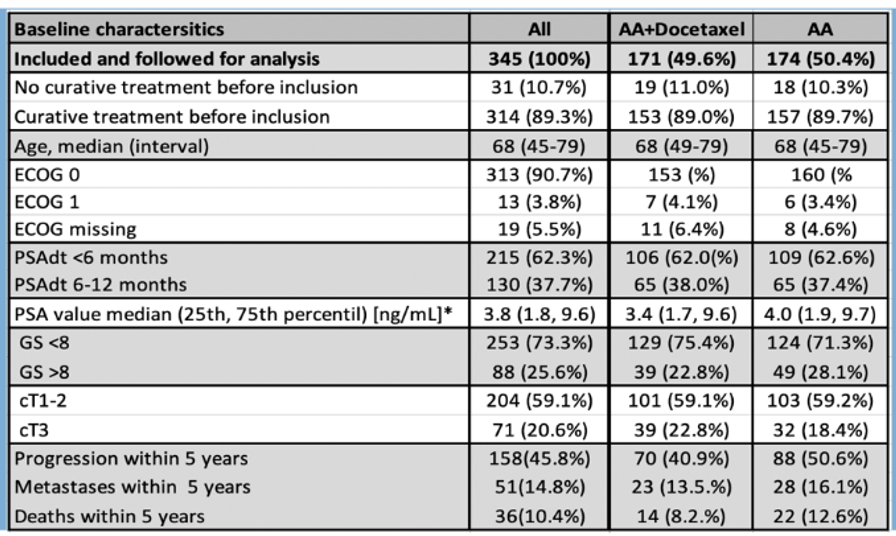 Over a median following up of 36 months, progression within 5 years occurred in 46% of all patients with metastasis in 15% and death in 10%. Among those with no progression, median follow-up was longer at 47 months.

Using the authors' aggregate definition of progression-free survival, they found significantly improved PFS for patients who receiving bicalutamide plus docetaxel as compared to bicalutamide alone, with a hazard ratio of 0.72 (95% confidence interval 0.52 to 0.99). 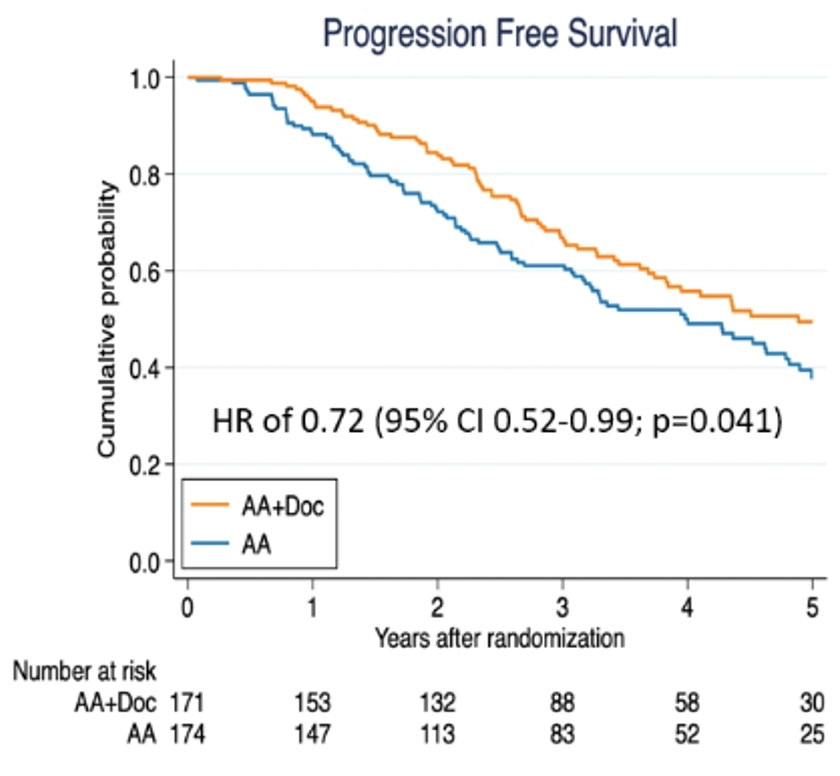 In subgroup analysis, this effect was consistent for patients who had or did not have previous curative-intent treatment, for those with PSA doubling time less than 6 months of 6-12 months, and those aged younger than 68 years or 68 years and older.

Dr. Josefsson concluded by highlighting that the addition of docetaxel to bicalutamide reduced time to progression by 28%. Whether this translates into differences in metastasis-free survival or overall survival will require a longer follow-up of this study cohort.

Given the changes in the treatment landscape, including the approval of enzalutamide, apalutamide, and darolutamide in this disease space due to proven benefits in metastasis-free survival (and, more recently at this years ASCO meeting, in overall survival), it is unclear how the demonstrated benefits in progression-free survival here will translate into clinical decision making. However, it is worth noting that patients in the control arms of the trials of androgen receptor agents received placebo rather than the first generation non-steroidal antiandrogen administered in this trial.