Since 2004, Dr. Mir Maresma notes that there have been 1,450 PubMed citations referencing robotic partial nephrectomy. However, many of these studies are (i) by highly skilled surgeons reporting their single-center experience, (ii) for proctoring/intuitive surgery, (iii) published in journals with minimal impact factor, (iv) include no randomized studies, (v) have no few comparative studies, and (vi) no there are adjustments or if there are they are rarely applied.

There are several factors related to partial nephrectomy including pre-surgical, surgical, and post-surgical factors. These are summarized in the following figure:

In a study by Dagenais et al.1 they estimated the relative contributions of patient and surgeon characteristics with regards to key outcomes after partial nephrectomy. Among 1,461 patients, there was significant between-surgeon variability in operative time, estimated blood loss, ischemia time, excisional volume loss, length of stay, positive margins, Clavien complications, and 30-d readmission rate (all p<0.001), but not chronic kidney disease upstaging (p=0.47) or percentage preservation of glomerular filtration rate (p=0.49). Patient factors explained 82% of the variability in excisional volume loss and 0-32% of the variability in the remainder of outcomes. As such, even after adjusting for patient characteristics, there is significant between-surgeon variability in outcomes after partial nephrectomy.

With regards to tumor complexity, several metrics have been reported over the last decade. These include the RENAL score, PADUA score, adhesive perinephric fat Mayo score, and contact surface area. These scoring systems are part of standard reporting of complexity prediction of surgical complications.

The surgical factors impacting partial nephrectomy, stratified by an open versus robotic approach, can be summarized as follows: 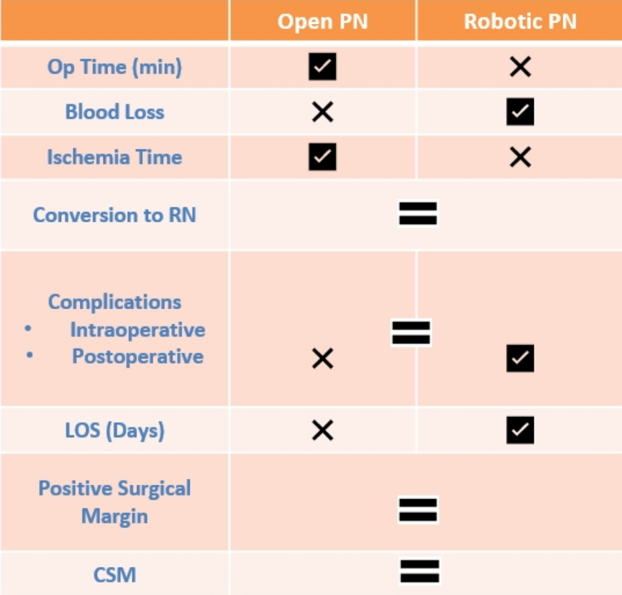 Additionally, the host factors impacting partial nephrectomy are as follows: 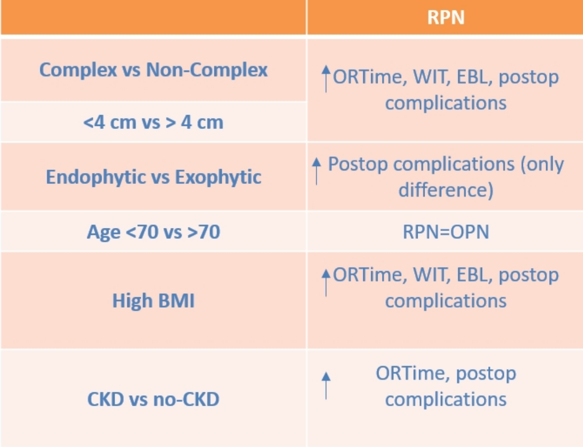 Dr. Mir Maresma concluded with the following take-home messages from her presentation: