(UroToday.com) Dr. Inderbir Gill gave a talk on his career experience in kidney surgery. Dr. Gill’s team has performed over 5000 cases of robotic renal surgeries. His talk focused on 5 important factors to consider in kidney surgery.

The first topic discussed was the use of active surveillance for small renal masses, as not all small renal masses (SRMs) need to be treated.  It is important to remember that kidney masses size predicts histology, and size also predicts grade.

The growth progression of renal cell carcinoma under active surveillance has been summarized from 18 surveillance studies.

Nomograms have been formulated to estimate if the renal tumor is aggressive. Generally, any fat, urothelial or vascular invasion and any high-grade tumor have a tendency to be more aggressive (30% are usually potentially aggressive).

The concept that every minute counts when the renal hilum is clamped during partial nephrectomy has been shown to be not entirely accurate, and it only starts to make a difference after the first 20-30 minutes of ischemia. As ischemia time is decreased, kidney function is more preserved.

Dr. Gill presented his experience in comparing the main artery vs. selective artery clamping in partial nephrectomy, which was performed in a study assessing 121 patients (Figure 1). 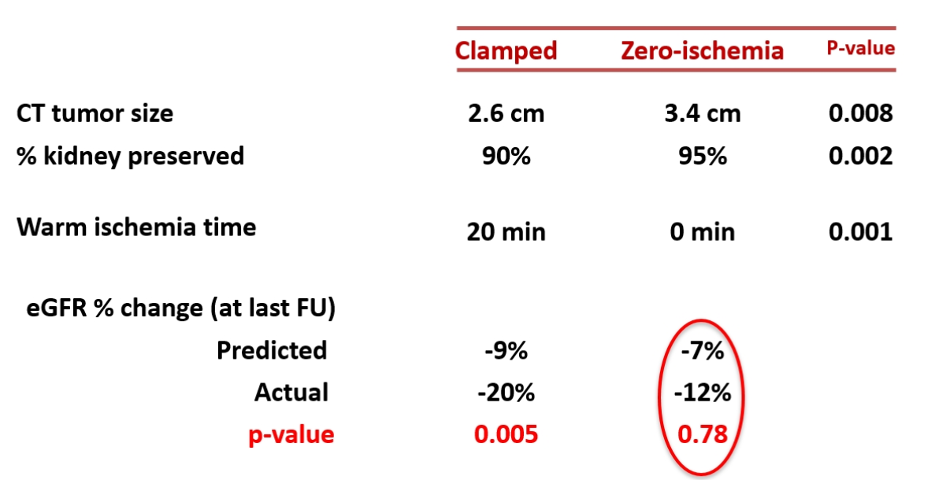 The third topic discussed is the technique of an “ideal” partial nephrectomy. This should include the following important concepts:

The rationale for performing anatomic partial nephrectomy is the vascular anatomy of the kidney. The intra-renal vascular architecture is radially oriented, and radial nephrotomy is less likely to transect major intra-renal vessels. Additionally, parenchyma and pyramids are radially oriented. Atraumatic blunt dissection of renal parenchyma is feasible to start an enucleative plane.

Anatomic partial nephrectomy should be done in hilar tumors and medial and polar tumors. It should not be done in large laterally based tumors, and when there is a large contact surface area, as in this case, there is multidirectional intra-renal arterial supply.

The goals should be to have negative margins, minimal or no ischemia, maximize volume preservation, and to perform the surgery in a minimally invasive fashion. Nowadays, it is possible to achieve both the minimization of ischemia and the preservation of kidney parenchyma as much as possible.

It is important to remember that some factors in kidney surgery are non-modifiable such as:

In contrast, some factors are modifiable, which include:

Next, Dr. Gill discussed the transition to robotic surgery from open surgery, which has been practiced since 2010. There have been a plethora of studies showing that robotic partial nephrectomy provides mostly superior, but at minimum, equivalent outcomes to open partial nephrectomy.

The last topic discussed was the conquering of the inferior vena cava (IVC) tumor thrombus. Dr. Gill has published a series of robotic surgical treatment of level 3 tumor thromboses3. His technique includes the following principles:

Dr. Gill has also operated on the first case of radical robotic nephrectomy with a level 4 tumor thrombus, with the urologic and cardiac team working together simultaneously. This is a very advanced procedure with intraoperative success witnessed when the right patients are selected, the surgery is done by experienced surgeons, and all technical details are considered. Additional follow-up is needed to determine the long-term outcomes of this complex surgery.