Toronto, Ontario (UroToday.com) Dr. Frédéric Pouliot presented an overview of the currently used biomarkers in prostate cancer.  A biomarker is defined as any substance, molecule, or reaction that can be measured in the organism or its products and that can influence or predict the incidence of a specific consequence or disease. Several such categories include susceptibility, diagnostic and prognostic markers.

There are several prostate cancer biomarkers used for detection and characterization of the disease. These include:

Figure 1 demonstrates at what stage of the disease can these biomarkers be used. PSA, which is the primary biomarker that is currently used, shows a linear correlation with the rates of prostate cancer diagnosis, with higher levels demonstrating a higher incidence of prostate cancer. However, there is no real cutoff for PSA, as a prostate cancer rate of 6.6% has been demonstrated at the lowest PSA level of 0-0.5. 1

Figure 1- The Usage of Biomarkers at Different Stages of Prostate Cancer: 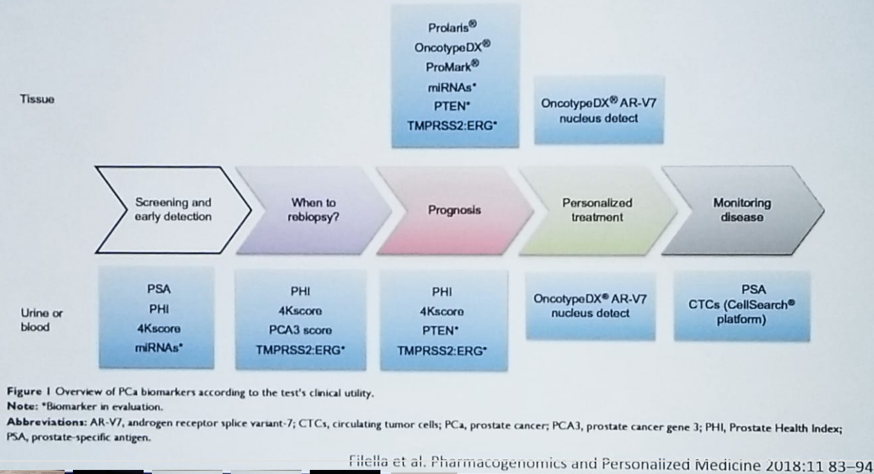 Newer PSA-based blood tests include the 4Kscore and the PHI test, and their parameters are shown in figure 2. 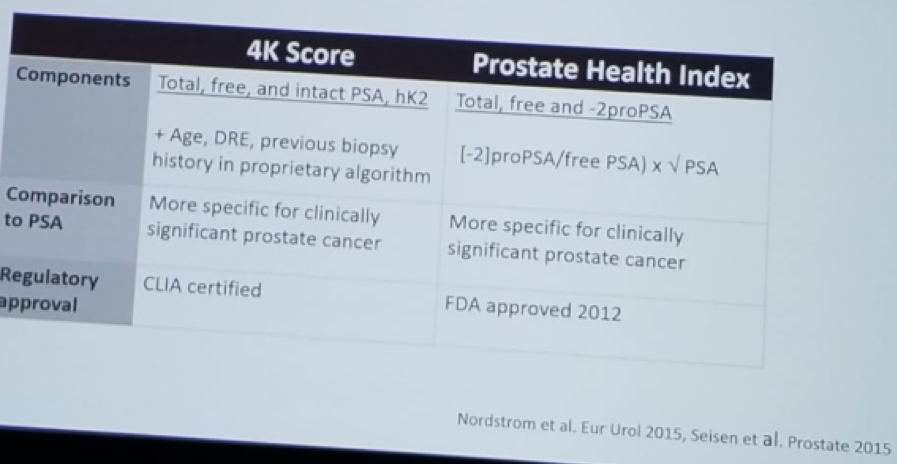 An important urinary biomarker is the PCA3 urine mRNA test. This biomarker demonstrated a higher accuracy than total PSA and free PSA to predict the presence of prostate cancer at repeated biopsy, with an area under the curve (AUC) from 0.65, 0.73, and 0.75 in prospective studies. The cutoff score is between 25 and 35 to determine if a patient should be biopsied. The combination of the TMPRSS2:ERG fusion gene and PCA3 could better predict prostate cancer at biopsy than the ERSPC risk calculator. When combined with the TMPRSS2:ERG, the sensitivity of PCA3 increases from 68% to 76%.2

Another important urinary biomarker is the SelectMDx urine test. This biomarker measures the level of mRNA of the DLX1 and HOXC6 genes, that use KLK3 (PSA) expression as an internal reference. It has a sensitivity of 91%, specificity of 36%, the negative predictive value of 94%, and positive predictive value of 27%, with an AUC of 0.76. It uses has been shown to decrease biopsy rates by 42%.3 It is most probably better than PCA3 in the detection of high-grade prostate cancer (AUC of 0.77 vs. 0.68).

The current European Association of Urology (EAU) guidelines state when assessing the risk of asymptomatic men, in addition to PSA, digital rectal examination and a risk calculator, an additional biomarker should be offered.

The presence of a cribriform pattern in histology of prostate cancer has been associated with a poor prognosis in biopsy specimens of Gleason 4+3 pattern.4 It has also been shown to be associated with worse prostate cancer-specific survival, and a higher risk for biochemical recurrence.5 ConfirmMDx is another tissue biomarker, that measures for epigenetic changes associated with prostate cancer at the DNA level (hypermethylation of 3 markers (GSPT1, APC, RASSF1). The concept behind this biomarker is that a field effect around cancer lesion can be present despite normal appearance under the microscope. The absence of methylation changes helps rule out malignancy (negative predictive value of 88-90%). 6 Figure 3 summarizes the data and demonstrates what biomarkers are currently available in Canada and their cost. 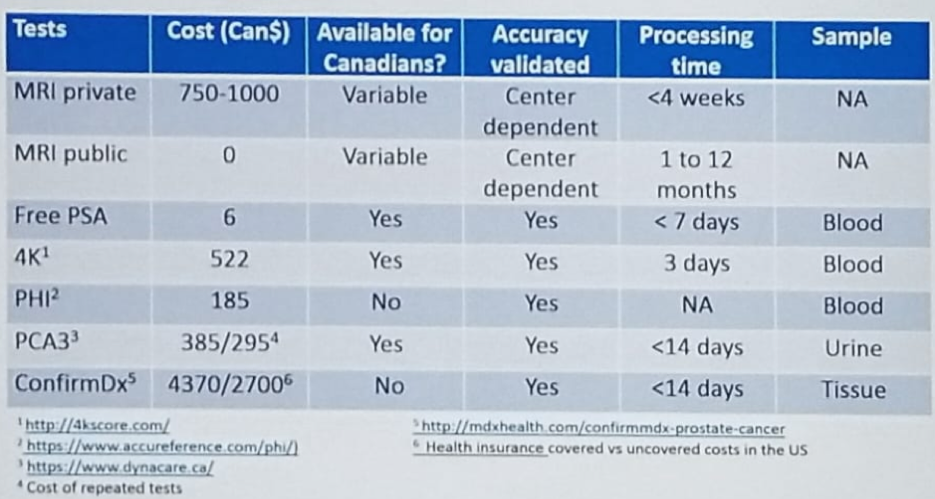 Biomarkers do not require trained readers, are not widely available, require time to order, and cost money to the patient. In contrast, mpMRI has shown significant advantages in high-quality trials, widely available, covered by hospitals, but needs expertise in reading and interpreting them. There have been some studies demonstrating an advantage in risk stratification when these two modalities are combined.

Concluding his talk, Dr. Pouliot stated that prostate cancer biomarkers could improve PSA accuracy for primary or repeated biopsies with missing less than 5% of high-grade cancer. They are helpful in characterizing prognosis before and after treatments and can potentially be an alternative to mpMRI when resources are not available for reading or scanning. Ultimately, the combination of both biomarkers and mpMRI is significantly better in characterizing a patient’s risk.