(UroToday.com) The 2021 American Urological Association (AUA) Summer School session on Upper Tract Urothelial Carcinoma included a case-based discussion led by moderator Dr. Surena Matin who was joined by panelists Dr. Sima Porten and Dr. Vitaly Margulis. This case highlighted the treatment of JELMYTO™ (mitomycin) treatment for upper tract urothelial carcinoma. This patient was a 56-year-old with gross hematuria and found to have a congenital solitary functioning right kidney with a circumcaval ureter. She was found to have a 3 cm low-grade Ta lesion in the renal pelvis and underwent two ureteroscopies followed by a percutaneous resection with mitomycin induction to the upper tract via a nephrostomy tube. She was subsequently found to have multiple papillary recurrences throughout the renal pelvis at her 3-month follow-up and FDA compassionate use approval was obtained for Mitogel.

While preliminary data for Jelmyto were presented at the AUA 2019 annual meeting, the final results of the OLYMPUS trial were published in Lancet Oncology in 2020.1 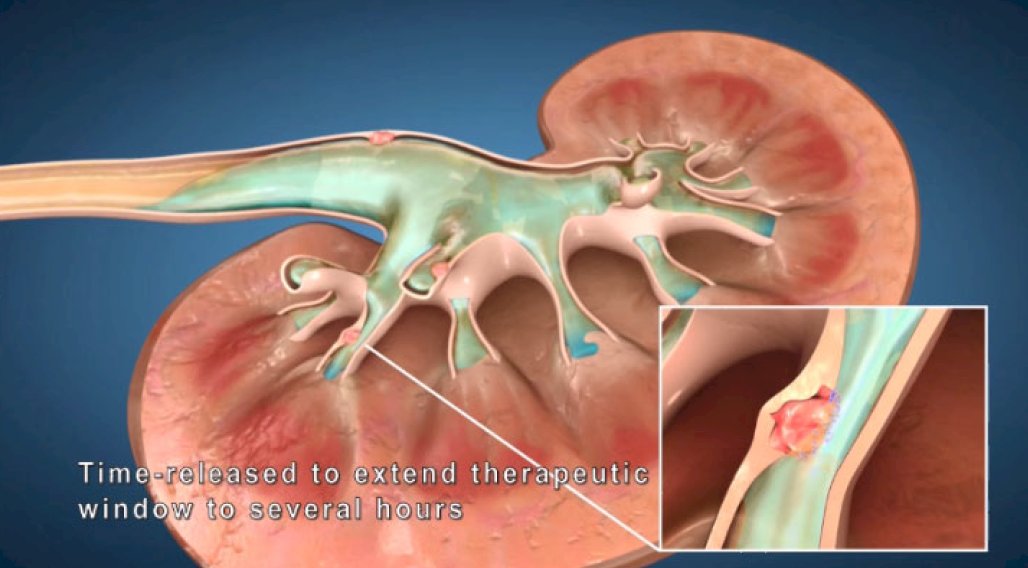 The OLYMPUS trial was a phase 3, open-label, single-arm trial designed to assess the efficacy, safety, and tolerability of UGN-101 in patients with low grade, noninvasive upper tract urothelial cancer. Patients were accrued at 24 academic sites in the United States and Israel. Eligible patients were adults (18 years of age or older) with either primary or recurrent biopsy-proven low-grade upper tract urothelial carcinoma of the renal pelvis or calyces, diagnosed in the two months prior to trial screening. Patients must have had a life expectancy of at least 2 years and adequate performance status (Eastern Cooperative Group performance status score less than 3 or Karnofsky Performance Status score of more than 40). Patients must have had one or more low-grade lesions above the ureteropelvic junction measuring 5-15mm in greatest dimension. Patients with lesions larger than this were eligible if they underwent “downsizing” via endoscopic treatment prior to initiation of treatment.

The determination of resectability was made at baseline by enrolling surgeons with unresectable tumors typically due to difficult access to the lower pole of the kidney.

Enrolled patients received six once-weekly instillations of UGN-101 as an induction course. This was administered via retrograde instillation with ureteral catheterization. The volume of UGN-101 administered was determined using the average of three fluoroscopic assessments of renal pelvic and calyceal volume. Notably, UGN-101 treatment was administered in a variety of settings including clinics, outpatient surgical centers, and operating rooms with both general and local anesthesia based on individual surgeon preference (nearly three-quarters received local anesthesia or sedation without general anesthesia). Treatment was deferred among patients experiencing adverse events. Four to six weeks following initial treatment, patients received their primary disease evaluation including ureteroscopy, selective upper tract cytology, and for-cause biopsy where indicated. Complete response was defined as a negative endoscopic evaluation and the absence of histologic or cytologic evidence of disease. Patients who experienced a complete response were offered ongoing monthly maintenance for 11 instillations or until first recurrence. Durability was assessed at 3-, 6-, 9-, and 12-months following initial treatment.

Among 110 patients screening, 74 were enrolled and 71 patients received treatment. As expected given the demographics of upper tract urothelial carcinoma, patients were predominately male with a median age of 71 years. The vast majority (87%) were white and 79% were current or former smokers. While 89% had two renal units at the time of enrollment, 11% had only a single unit due to congenital or therapeutic reasons. 30% of patients had a history of previous TURBT for bladder cancer and 52% of patients had previous renal ablative surgeries. Thus, in total, 87% of patients had undergone prior surgery for urothelial carcinoma. Most patients had multifocal disease at baseline enrollment, with a median of 2 lesions (range 1 to 8). Prior to endoscopic debulking, the median diameter of the papillary tumor was 14mm (range 5 to 50mm). Median total tumor burden, calculated as the sum of the largest diameters of each lesion, was 17mm (range 5 to 65mm). Notably, 34 patients (48%) had a tumor that was deemed unresectable based on being unreachable by laser. Of the 71 patients who received at least one dose of the study medication, 61 completed the 6 treatments defining the initial treatment. Among those who discontinued treatment, this was due to adverse events in 9 patients and personal reasons in the remaining one.

Among the 71 patients who received at least one dose, 42 patients (59%, 95% CI 47-71%) had a complete response at the time of primary disease evaluation. Of the remainder, 8 (11%) had a partial response, 12 (17%) had no response, 6 (8%) had newly diagnosed high-grade disease, and 3 (4%) had an indeterminate response. Central histologic and cytologic evaluation led to similar complete response results (37 of 59, 63%). Of the 42 patients with complete response, 41 entered follow-up. Of these, 29 (71%) received at least one dose of maintenance therapy and 6 (15%) were continuing on maintenance therapy at the time of data cut-off. Of the 23 patients who started but were no longer receiving maintenance therapy, reasons for discontinuation included adverse events in 10 patients, investigator discretion in 10 patients, patient non-compliance with the treatment regime in 5 patients, tumor recurrence in 2 patients, and logistical considerations in 1 patient.

Twelve-month durability could be assessed in 20 patients. Of these 20 patients, 14 (70%) showed ongoing durability of their complete response and 6 had a documented recurrence during follow-up. However, none of these patients progressed to high-grade or invasive disease. Among those with complete response at primary disease evaluation, 84% (95% CI 71-97%) remained disease-free at 12 months. Median time to recurrence was reported as 13 months (95% CI 13 months to not estimable) though should be considered highly tenuous given 6 patients at risk at 12 months and 1 patient at risk at 13 months.

Despite these promising results, toxicity was not insignificant: 67 patients (94%) experienced adverse events, and 26 (37%) patients experienced severe adverse events. 60 patients (85%) had adverse events which were deemed treatment-related and 19 (27%) had severe treatment-related events. 19 patients (27%) discontinued treatment due to adverse events both in the initial 6-week treatment period (9 patients, 13%) and during maintenance (10 patients, 14%). Among adverse events of particular interest, renal functional impairment was noted in 14 patients (20%). There was also a significant burden of urinary tract morbidity: among 71 patients who received at least one dose of study medication, 48 patients (68%) had an adverse event related to the urinary system including 11 (23%) who did not require surgical intervention, 24 (50%) who required transient stent placement, 11 (23%) who required long-term stent placement (still in place at the time of data cut-off), and 2 (4%) who required nephroureterectomy due to the need for permanent drainage as a result of ureteral stenosis.

Dr. Matin noted that there are several practical concepts that are important to highlight for the utilization of Jelmyto, specifically with regards to the ureteral stricture rate seen in the trial and in clinical practice. More doses of Jelmyto seem to increase the risk of ureteral stricture, with a potential predisposition for patients with kinked ureteropelvic junctions or tight distal ureters. Two mitigation strategies (that do not have data, but there are no restrictions for using) include:

Dr. Porten notes that she has had a hard time operationalizing Jelmyto at her institution based on the way they are set up for giving intravesicular therapy in their infusion center, which is on a separate floor in their clinic. Thus, Dr. Porten only gives Jelmyto through a nephrostomy tube, which requires a motivated patient. Dr. Margulis states that Jelmyto is a nice tool to have in our armamentarium given that we are able to treat not only the renal pelvis but also the ureter with the delayed-release ability of Jelmyto. He typically uses Jelmyto in his surgery center and under local sedation. The aforementioned patient had Jelmyto induction x 6 weeks followed by 3 months of maintenance therapy with evidence of recurrence.