(UroToday.com) In anticipation of the 2021 American Urological Association (AUA) Annual Meeting which is being held, in a delayed fashion, in September, the AUA hosted a “May Kick-Off Weekend” which highlighted a variety of important topics in both benign urology and urologic oncology. Saturday afternoon, Adam Feldman led a course entitled “Trimodality Therapy (TMT) for Management of Muscle Invasive Bladder Cancer” along with faculty Richard Lee and Jason Efstathiou.

Closing this course on TMT, Dr. Efstathiou presented on Biomarkers, Immunotherapy and Future Directions in TMT. He began by emphasizing, as many of the prior presentations in the course had done, that clinical-pathologic features affect TMT decisions, including tumor size, T stage, hydronephrosis, renal function, and bladder function. The question then is whether genomic factors may be able to inform bladder sparing therapy.

There is the potential for benefit of genomic biomarkers across the spectrum the natural history of the disease, with a particular role for initial clinical decision making when deciding on a treatment approach and for ongoing follow-up and the detection of recurrent disease.

He briefly gave an overview of a number of biomarkers which have been examined in the context of TMT for bladder preservation. These include DNA repair genes, signal transduction gene, immune checkpoint targets, and molecular signatures.

However, he further focused on a few examples. First, he discussed the dsDNA break repair gene MRE11 which seems to be predictive of response to radiotherapy but not among those undergoing cystectomy. Patients with high MRE11 have improved survival when treated with radiotherapy but comparable results to those with low MRE11 when treated with cystectomy. Given the overall similarity of outcomes between TMT and cystectomy, this type of a predictive biomarker (if validated) would potentially allow for rationale treatment selection and allocation.

When MRE11 was assessed in the RTOG data, it had important prognostic ability but, owing to the lack of an alternative treatment approach, could not be assessed for predictive ability.

Dr. Efstathiou then discussed the potential for bladder tumor subtyping by expression profiling. This approach has been fairly widely studied, both prognostically and with respect to chemotherapy response. In the context of TMT, patients with basal subtype tumors appear to derive greater benefit from concurrent systemic therapy with radiotherapy while outcomes are equivalent for luminal. 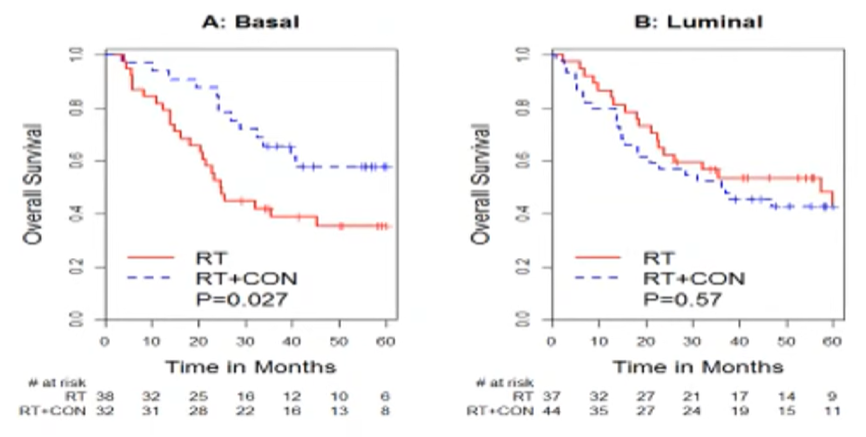 There is extensive data, across many tumor types, that radiotherapy influences the tumor immune microenvironment. However, in the context of TMT, the opposite is potentially more important: does the tumor microenvironment affect sensitivity to radiotherapy. This has been recently examined and the data suggest that this is true: an immune activated signature is associated with improvements in outcomes following TMT but not following cystectomy.

Further, there is considerable data, again across tumor types, that there is synergy between radiotherapy and immunotherapy. This forms the basis for considering TMT utilizing immune checkpoint inhibitors as part of the systemic therapy regime. Notably, while immunotherapy approaches are approved in BCG-refractory CIS non-muscle-invasive bladder cancer and in first-line, maintenance, and second-line therapy of metastatic disease, this approach is not approved in muscle-invasive bladder cancer to date. There are a number of ongoing and recently reported trials assessing peri-operative immunotherapy for patients undergoing radical cystectomy in addition to in the TMT setting.

Dr. Efstathiou emphasized that the interplay between radiotherapy and host immune response is complex, involving multifactorial and heterogenous interaction with both immune activating and suppressive effects of radiotherapy. 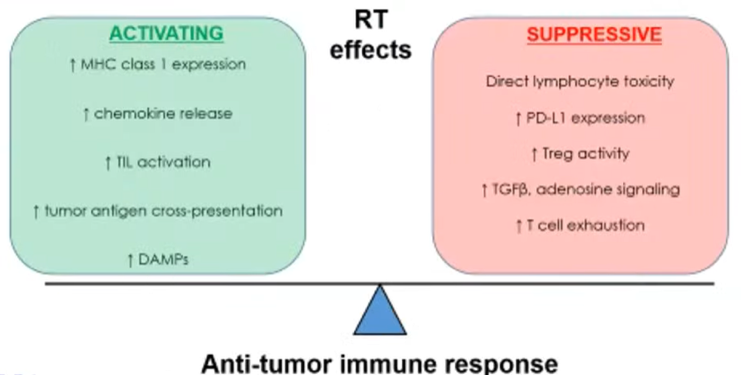 However, concomitant use of immune checkpoint inhibition may help to attenuate radiotherapy-induced immunosuppressive effects which preserving the activating effects. This type of synergistic interaction has been suggested in preclinical data from mouse models.

In the clinical setting, early phase I data from metastatic urothelial carcinoma suggest a much greater benefit to concurrent radiotherapy with immune checkpoint inhibition, than with sequential radiotherapy followed by immune checkpoint inhibition. Further, this combined approach is now an accepted and approved approach in lung cancer. Thus, there are numerous ongoing trials assessing combinations of chemoradiotherapy and immunotherapy in MIBC.

First, Dr. Efstathiou highlighted the DUART trial, which was recently reported at ASTRO. This study assessed the use of concurrent and adjuvant durvalumab with TMT. The complete response rate was 68% and the overall response rate was 80% with minimal clinically significant immune-related toxicity.

While not reported yet, the phase III INTACT trial (SWOG/NRG 1806) randomizes patients to chemoradiotherapy with or without atezolizumab. In a pragmatic design, chemotherapy choice is administered at the treating physician's discretion as is the radiotherapy field (whether or not to include nodal fields). This study is designed to assess the primary outcome of bladder intact event-free survival. 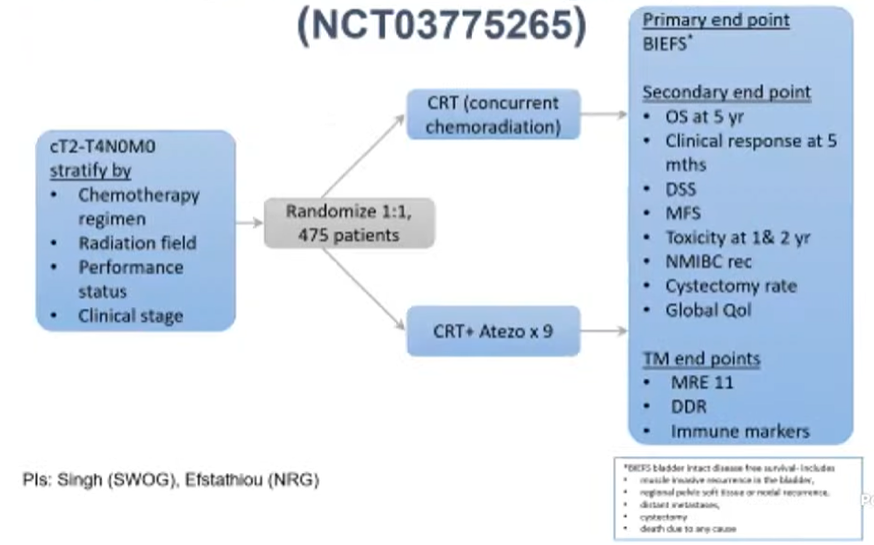 To date, more than 150 patients have been accrued. First reported at ASCO-GU 2021, analysis of the first 73 enrolled patients demonstrated the safety of this combined regime with ongoing accrual and follow-up needed to demonstrate efficacy.

Keynote-992 is a similar study utilizing pembrolizumab rather than atezolizumab in combination with chemoradiotherapy.

Further, the phase III CCTG BL13 study is using adjuvant rather than concurrent immunotherapy, with adjuvant durvalumab following the completion of trimodal therapy.

Finally, INSPIRE (ECOG-ACRIN / NRG EA8185) is a phase II study of chemoradiotherapy with or without durvalumab in patients with node positive urothelial carcinoma.

While these studies are exciting and promising, Dr. Efstathiou sounded a word of caution on the basis of the phase I PLUMMB study which found dose-limiting toxicities with the combination of pembrolizumab and hypofractionated radiotherapy. A similar effect was seen in a phase I study out of McGill examining atezolizumab with moderately hypofractionated radiotherapy. In this case, bowel toxicity was the dose-limiting factor. For this reason, INTACT is mandating conventional fractionation.

In concluding not just this talk but the overall course on TMT, Dr. Efstathiou emphasized that many patients with MIBC are not getting curative intent treatment. Thus, this is an undertreated and underserved population. TMT is a guideline-supported treatment option which offers similar survival outcomes with good long term quality of life. However, this is not a non-surgical option and the involvement of urologists is critical for good outcomes. Ongoing improvements in radiotherapy delivery and the optimization of systemic therapy (including potentially the inclusion of immunotherapy) offers the potential to further improve outcomes. Hey closed by emphasizing that informed decision making by the patient is key for those with MIBC.