This website uses cookies to ensure you get the best experience on our website. Privacy Policy
(UroToday.com) In anticipation of the 2021 American Urological Association Annual (AUA) Meeting which is being held, in a delayed fashion, in September, the AUA hosted a “May Kick-Off Weekend” which highlighted a variety of important topics in both benign urology and urologic oncology. Saturday morning, W. Marston Linehan led a course entitled “Diagnosis and Management of Localized, Locally Advanced and Advanced Kidney Cancer” along with Ramaprasad Srinivasan, David McDermott, and Mark Ball.

Following presentations by Dr. Linehan on the genetics of kidney cancer and by Dr. Ball on technical considerations in partial nephrectomy, Dr. McDermott presented on the growing role of immunotherapy in renal cell carcinoma (RCC).

While no longer routinely used, the rationale for immunotherapy for solid tumors comes from the 1980s where high-dose IL-2 was used. This approach, while toxic, demonstrated that cure is possible, even though most patients did not respond. Since then, we have moved beyond cytokine therapy to immune checkpoint inhibition based on the seminal work of Drs. Freeman and Honjo. Relatively rapidly following their discovery, immune checkpoint inhibitors moved into clinical practice. In kidney cancer, CheckMate 025 was published in 2015 establishing the role of nivolumab in patients with advanced renal cell carcinoma.

Thinking back to the interaction between the immune system and cancer, most patients with the clinically evident disease are in immune “escape”. 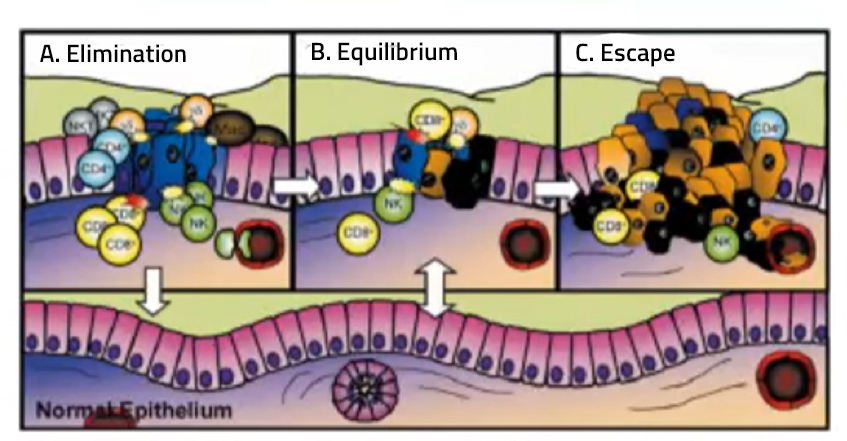 The goal of PD-L1 blockade seeks to return to an equilibrium state. However, our greater goal is to move to elimination. To do so, preclinical data suggests that adding other targets may enhance the response from monotherapy. This forms the basis for combinations of PD-1/PD-L1 inhibitor with CTLA-4 blockade or VEGF blockade.

As a result, the current standard of care combines the old first line therapy (VEGF) with the old second line (IO monotherapy). This approach has been examined in a number of phase III randomized controlled trials. In addition, CheckMate-214 demonstrated the benefit of the combination of combined checkpoint inhibition with PD-1 and CTLA-4 blockade.

Dr. McDermott highlighted that many medical oncology conferences currently focus on choosing between these treatment options. He emphasized that the combinations that include VEGF are associated with high objective response rates and longer progression-free survival though adverse event attribution can be unclear, follow-up is less mature, and there is the risk of chronic TKI toxicity. In contrast, dual immune checkpoint inhibition has more mature follow-up with durable responses and the potential to stop therapy. However, there is a higher rate of immune-related adverse events and a lower response rate. He emphasized that, in his opinion, debates on this topic are a waste of time due to flaws in cross trial comparisons. However, he highlighted that, with increasing follow-up, the relative benefit of combined checkpoint inhibition has remained stable while the magnitude of benefit has shrunk in trials of IO-TKI combinations.

Further, he emphasized that the “preferred” approach may differ based on which endpoint is considered. He highlighted that there are three categories of endpoints:

Dr. McDermott then argued that metastatic kidney cancer is a disease that can be cured, drawing parallels to the approach taken by Dr. Einhorn in advanced testicular cancer decades ago. Based on this premise, if we believe that advanced kidney cancer can be cured, we should be working to make this outcome more common. Supporting his assertion, he highlighted long-term follow-up data from the CheckMate-214 trial published by Dr. Albiges and colleagues demonstrating long term survival, including off therapy, for patients who received nivolumab and ipilimumab.

To make cure more common, he suggested that we need a number of improvements in care including the rationale use of therapy guided by predictors of response, the use of novel trial designs, targets, and endpoints.

Assessing these first of these, and particularly relevant given the likely forthcoming use of immunotherapy in the adjuvant setting, he emphasized the importance of developing predictive markers to maximize benefit of these therapies. He highlighted data from the IMmotion151 cohort to identify molecular correlates of response. This work identified 7 different subpopulations of kidney cancer, with varying response to therapy. In particular, the T effector infiltrated subgroup was more likely to respond to IO therapy while other approaches may be needed for other subgroups.

In the context of trial design, Dr. McDermott highlighted a number of recently completed and ongoing studies examining the use of immunotherapy in the adjuvant and neoadjuvant settings. The first, and nearly immediately forthcoming of these (to be presented at ASCO 2021), is Keynote-564 which examined the use of post-operative adjuvant pembrolizumab, compared to placebo. While results have yet to be presented, a press release reported that use of pembrolizumab improved disease-free survival.

A second relevant trial is PROSPER, which examines the use of pre-operative nivolumab, premised on the idea that the population of T cells is greater pre-operatively and thus response to checkpoint inhibitors.

This approach, with neoadjuvant immunotherapy, is now used in patients with resectable lung cancer and emphasizes importance of collaboration between med oncologists and surgeons.

Dr. McDermott then discussed ongoing work to identify novel targets with a focus on enhanced immune response. These approaches include tumor vaccines, novel immune checkpoints, CAR-T cells, and tumor-infiltrating lymphocytes (TILs). He highlighted work from Harvard which is using single cell sequencing in an attempt to improve the rationale use of therapy and identify new targets, including TIGIT and M2 macrophages.

In addition, he discussed the development of patient specific cancer vaccines based on neo-antigens procured from patient tumor tissue.

Further, ongoing work is seeking to identify novel checkpoints, including pathways which contribute to PD-1 resistance. Recent work has identified the HHLA2/KIR3DL3 pathway which may contribute to checkpoint inhibitor resistance. This has allowed new therapeutic targets as inhibition of KIR3DL3 allows for engagement of an anti-tumor immune response.

Finally, Dr. McDermott highlighted the importance of novel, patient-center endpoints. As alluded to above, treatment-free survival is an important metric representing time that patients are alive without being on therapy. In addition to improvements in overall survival, combined checkpoint inhibition is associated with improved treatment-free survival. 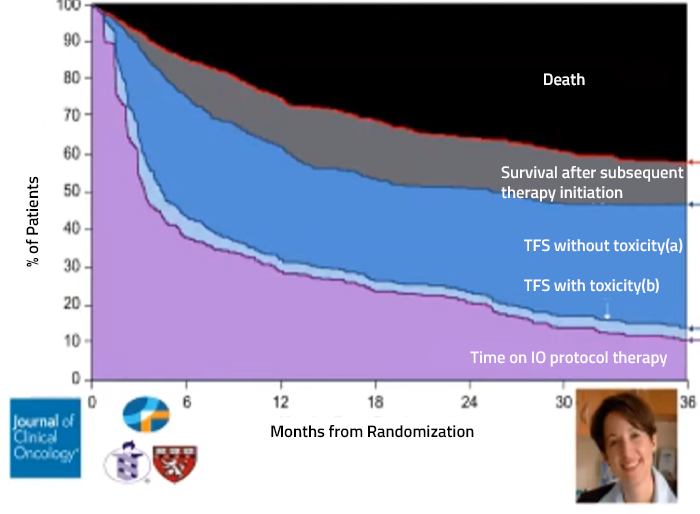 The use of this outcome may allow for more meaningful comparisons of treatment approaches. Further, efforts to improve treatment-free survival may lead to novel treatment paradigms including observation in good-risk metastatic renal cell carcinoma, stopping the drug early, and a push for deep responses. Highlighting the example of testicular cancer, he emphasized how systemic therapy is intensified for patients who fail to completely respond to first-line therapy.

To deepen responses, a number of approaches are under study including TIL therapy. In this approach, T-cells are harvests from the surgical specimen which are then reinfused along with IL-2 in an attempt to induce cure.

He emphasized that with a variety of approaches, we should continue to work to make cure more common in kidney cancer.

Presented by: David McDermott, MD, Director of the Biologic Therapy and Cutaneous Oncology Programs at Beth Israel Deaconess Medical Center. He is the Leader of the Dana Farber/Harvard Cancer Center Kidney Cancer Program and Principal Investigator of the NCI Kidney Cancer SPORE grant.