This website uses cookies to ensure you get the best experience on our website. Privacy Policy
(UroToday.com) In anticipation of the 2021 American Urological Association (AUA) Annual Meeting which is being held, in a delayed fashion, in September, the AUA hosted a “May Kick-Off Weekend” which highlighted a variety of important topics in both benign urology and urologic oncology. Saturday morning, W. Marston Linehan led a course entitled “Diagnosis and Management of Localized, Locally Advanced and Advanced Kidney Cancer” along with Ramaprasad Srinivasan, David McDermott, and Mark Ball.

Following an initial pre-test, Dr. Linehan began this session with a talk focusing on the genetic basis of kidney cancer, including the implications for diagnosis and management. He emphasized that, while we initially thought of and treated all kidney tumors as the same, now we understand that kidney cancer represents a number of genetic and phenotypically diverse tumors all of which occur in the kidney. 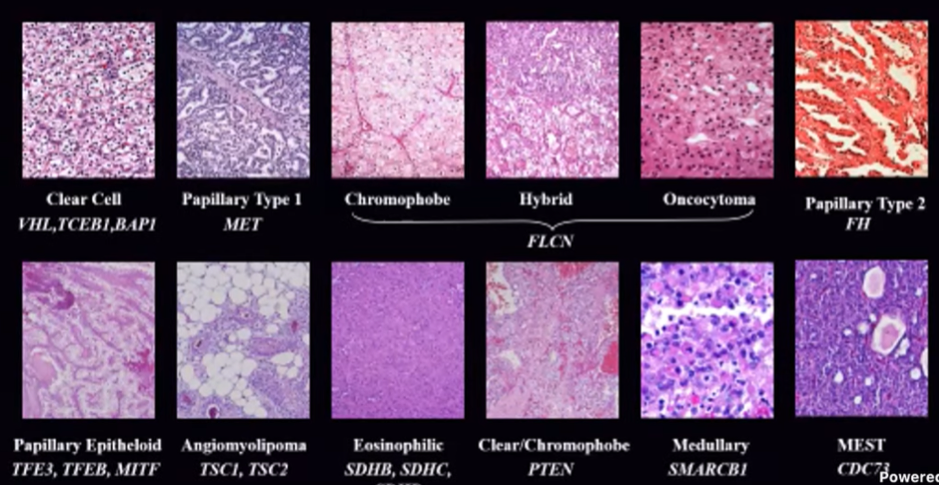 While our understanding of these diseases has come from a study of patients with hereditary diseases, the conclusions are applicable to those with sporadic disease and have helped shape treatment for all patients with kidney cancer. At the National Cancer Institute (NCI), in the 1980s, they found that loss of the short arm of chromosome 3 was associated with clear cell renal cell carcinoma. However, the human genome hadn’t yet been described so it wasn’t clear which genes may be involved. To help address this, they focused on studying VHL families. VHL disease, in addition to being characterized with renal tumors, is also associated with tumors of the adrenal gland, pancreas, brain or spine, eyes, and inner ears.

At the NCI, more than 1100 patients from more than 400 families with VHL have been evaluated and treated. This large exposure has helped to not just refine our understanding of the underlying biology, but also appropriate clinical decision making.

Dr. Linehan emphasized that they have come to recommend active surveillance with a “3cm rule” where surgical intervention is recommended once the largest tumor reaches 3cm in maximal diameter. At the time of surgery, a nephron-sparing approach with tumor enucleation is advocated. He emphasized that, as of May 22, 2021, no patients have developed metastatic disease when managed this way. From a technical perspective, he highlighted that most patients are now managed with robotic-assisted partial nephrectomy with enucleation at level of pseudo capsule, sparing parenchyma.

Moving back to their work understanding the underlying pathogenesis of VHL-associated ccRCC, Dr. Linehan utilized linkage analysis leading to the identification of the VHL gene in the spring of 1993.

Further work then sought to understand the function of the VHL gene. This understanding of the mechanism helps to guide the development of therapy for these patients.

VHL forms a complex to target HIF for ubiquitin-mediated degradation in an oxygen sensitive fashion: under normoxia, ubiquitination of HIF-α leads to its degradation. This fails in hypoxia and HIF-α accumulations. HIF is a transcription factor which drives transcription for VEGF, Glut-1, PDGF and others which contribute to a proliferative state.

Understanding these pathways has led to the development of 9 different targeted therapies. These target mTOR, the VEGF-receptor, the PDGFR-receptor, and the MET-receptor.

However, these agents act on targets that are important in other biologic functions, contributing to their toxicity. Thus, there is an ongoing interest to identify novel targets. Rather than addressing the downstream effects of HIF activation, small molecular targeting of HIF-2α as a very selective treatment. Belzutifan (MK-6482) is a small molecule inhibitor of HIF-2α. Early trial data have suggested very good responses in patients with VHL disease.

Dr. Linehan then moved from discussing ccRCC to other subtypes of RCC including type 1 papillary RCC, type 2 papillary RCC, and TFE3 RCC. Beginning with type I papillary RCC, he highlighted that, as with the VHL paradigm in ccRCC, studying families with hereditary type I papillary RCC has contributed to our knowledge of this disease. In this disease, the hereditary syndrome is Hereditary Papillary Renal Carcinoma (HPRC) which is associated with bilateral, multi-focal tumors. From a clinical perspective, Dr. Linehan emphasized that the approach parallels that of VHL disease in which observation is offered until the largest tumor measures 3cm at which time a nephron-sparing surgery is advocated.

Studying these families with HPRC identified MET, a cell surface receptor for HGF, as the underlying pathogenic driver of this disease. In fact, HPRC is associated with activation mutations in the tyrosine kinase domain of the MET receptor. In parallel to VHL and ccRCC, MET mutations were frequently identified in patients with sporadic papillary type I RCC.

As with VHL and ccRCC in which an understanding of the underlying tumor biology led to the identification of novel therapeutic targets, the dual VEGFR and MET inhibitor foretinib was identified and testing in papillary disease.

Dr. Linehan then moved to discuss type 2 papillary RCC, which is associated with Hereditary Leiomyomatosis Renal Cell Carcinoma (HLRCC). In addition to type 2 papillary renal cell carcinomas with an aggressive phenotype, this syndrome is associated with cutaneous leiomyomas, and uterine leiomyomas (which may be diagnosed at a very young age). From a clinical perspective, these tumors are managed very differently than ccRCC associated with VHL and type 1 papillary RCC associated with HPRC due to the aggressive tumor biology. Thus, observation is not recommended and a wide surgical margin should be employed given the infiltrative biology. Further, patients with known HLRCC need to be monitored closely given the aggressive disease biology. 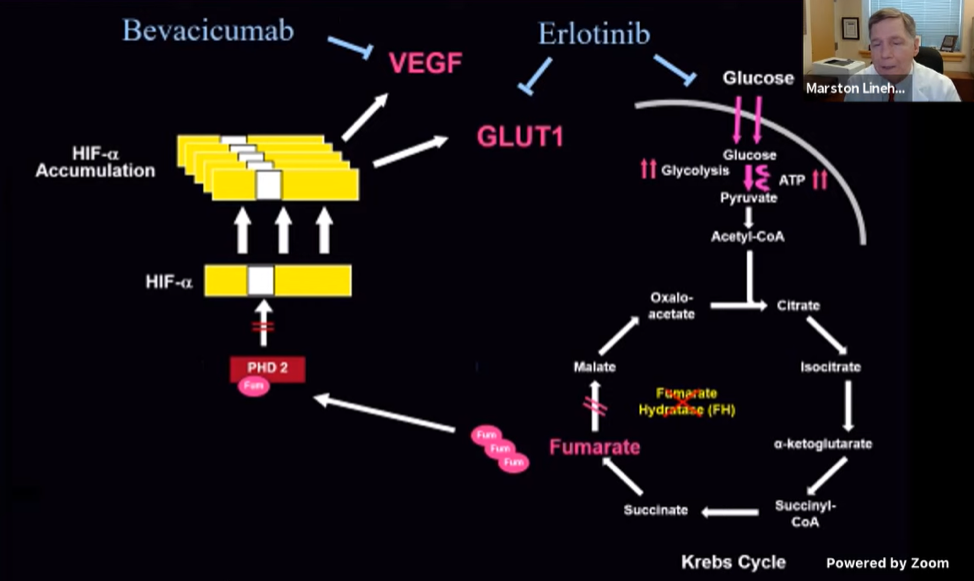 Finally, Dr. Linehan discussed another type of “papillary” kidney cancer, presenting in children and young adults. As with type 2 papillary RCC, this is associated with aggressive disease biology and a poor prognosis. Molecular studies demonstrated karyotypic abnormalities with translocation of chromosome 1q21.2 and chromosome Xp11.1. This translocation leads to the activation of TFE3. 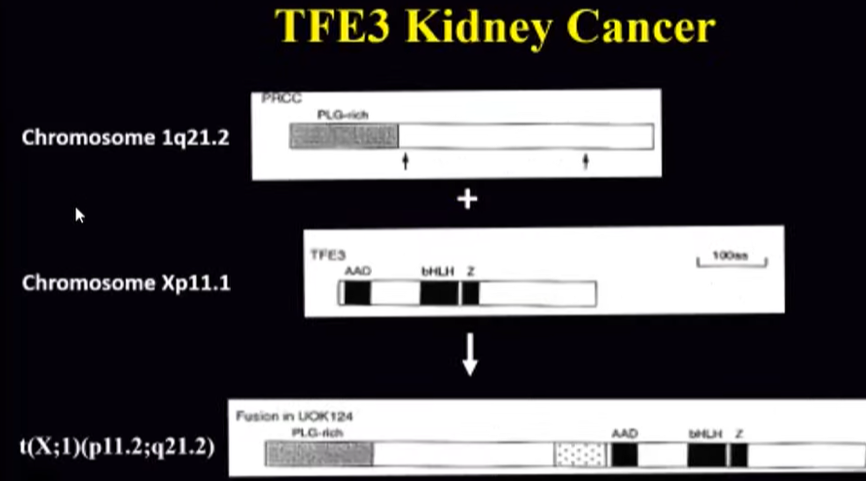 Dr. Linehan highlighted that understanding the genetic changes which underpin kidney cancer can help guide when to operate, how to operate and provide the basis of developing systemic therapies.