(UroToday.com) The treatment landscape in advanced prostate cancer has rapidly evolved. In particular, agents with demonstrated survival benefits later in the natural history of prostate cancer have been used earlier in the disease process. In the context of metastatic castration resistant prostate cancer (mCRPC), docetaxel was the first agent to demonstrate a survival benefit when combined with conventional androgen deprivation therapy (ADT). Subsequently, docetaxel demonstrated benefit in metastatic hormone-sensitive prostate cancer (mHSPC), also referred to as metastatic castration-sensitive prostate cancer. Following this, a number of other treatment approaches have been assessed and are now clinically used including androgen receptor targeting agents, such as abiraterone acetate and enzalutamide. In ARCHES (NCT02677896), the addition of enzalutamide to ADT was associated with significantly prolonged radiographic progression-free survival (rPFS) compared to placebo plus ADT.

In a podium presentation at the American Urologic Association Virtual Annual Meeting, Dr. Neal Shore and colleagues presented results of a post hoc analysis aimed to evaluate the efficacy of enzalutamide +ADT versus placebo +ADT in patients who received prior antiandrogen (AA) therapy before study randomization.

While the methods of the ARCHES trial have previously been published, briefly, patients with mHSPC were randomized 1:1 to receive enzalutamide (160 mg/day)+ADT or placebo +ADT, stratified by disease volume and prior docetaxel.

The primary endpoint was rPFS (based on central review) and secondary endpoints included time to prostate-specific antigen (PSA) progression, time to initiation of new antineoplastic therapy, and PSA undetectable rate (PSA <0.2 ng/ml). Prior first-generation AA (nilutamide, flutamide, and bicalutamide) was permitted if given concurrently with up to 6 months of ADT with luteinizing hormone-releasing hormone agonists/antagonists or bilateral orchiectomy prior to day 1, and this formed the basis of this post hoc analysis. Further, the post hoc analyses of the primary and secondary endpoints were performed based on prior/no AA and prior AA duration (≤1 month; >1 month). A sensitivity analysis was conducted on patients who received gonadotropin-releasing hormone analogs (GnRHa)+prior/no AA to account for potential confounding effects from GnRH antagonists and bilateral orchiectomies.

The combination of enzalutamide +ADT improved rPFS and secondary clinical outcomes versus placebo+ADT, regardless of prior AA. 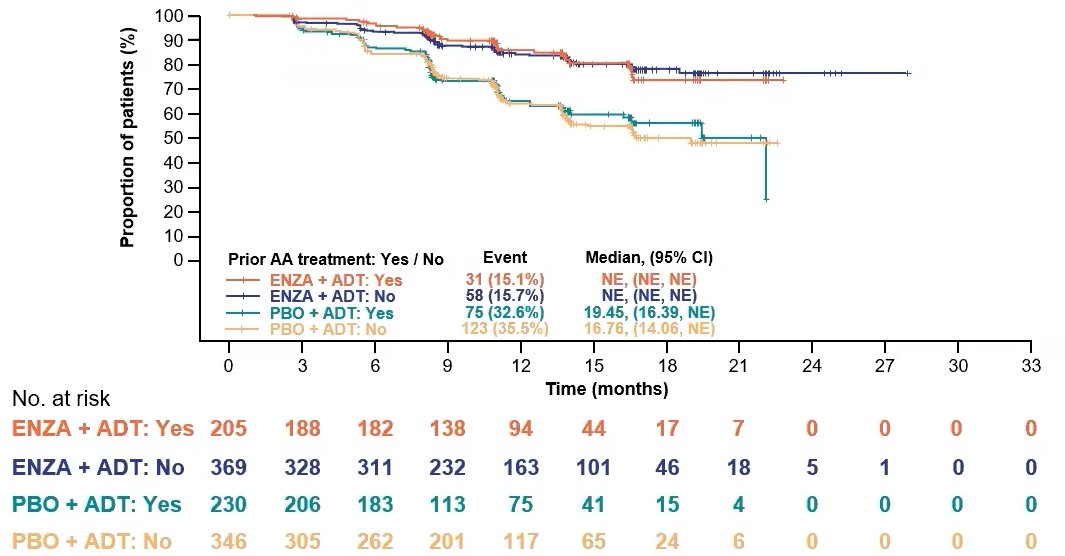 Additionally, combination of enzalutamide +ADT improved rPFS and secondary clinical outcomes versus placebo+ADT, regardless of prior AA duration and GnRHa use. 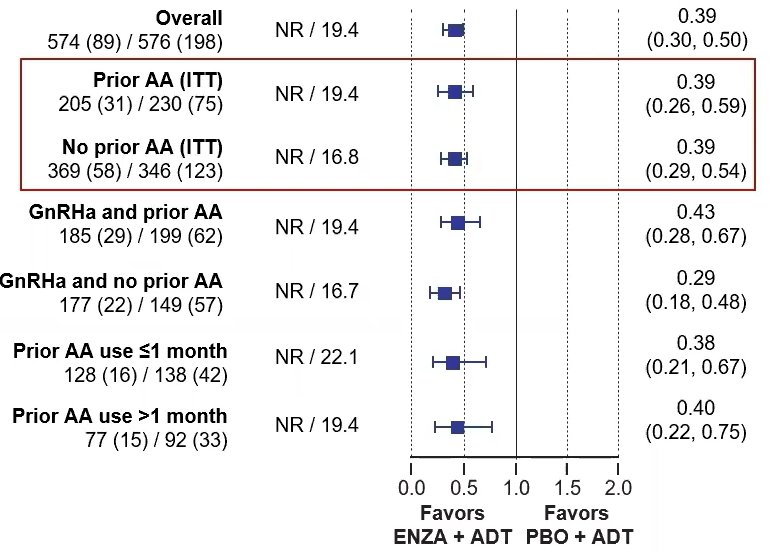 Further, there were no significant differences in the safety profile of enzalutamide +ADT by prior AA use.

The authors, therefore, conclude that the combination of enzalutamide +ADT improved rPFS and secondary clinical outcomes versus placebo +ADT in patients with mHSPC, irrespective of prior AA use, with no significant difference in safety profile.