Dr. Pettaway began by reviewing the epidemiology of penile cancer. This is a rare tumor in the United States and much of the developed world. It is, however, more common in African, Asia, and South American. However, at its highest incidence, there are fewer than 7 or 8 cases per 100,000 population. In terms of presentation, many men present with a painless mass or ulcer while others may have foul odor or discharge.

The preponderance of men have distal disease with tumors of the glans in 48%, prepuce in 21%, glans and prepuce in 9%, coronal sulcus in 6%, and shaft in <2%. The traditional treatment approach for penile cancer has been amputation. While this provides excellent local control, may be necessary for advanced disease, and provides pathological risk stratification for the risk of nodal involvement, it is a disfiguring surgery with significant effects on psychological well being. In considering penile preserving treatment strategies, Dr. Pettaway highlighted three primary goals: effective local control, organ functionality, and cosmetic appearance.

Dr. Spiess discussed the role of topical therapy in organ-preserving treatment. This approach was been used in penile CIS. Dr. Spiess highlighted data from a retrospective review of patients treated for either primary or recurrent penile carcinoma in situ (CIS) with topical 5-fluorouracil and imiquimod over a 10-year window. Treatment was administered in a standard fashion with an application for 12 hours every 48 hours for 28 days. 5-fluorouracil was used as first-line treatment while imiquimod was used as second-line therapy. Among 86 patients diagnosed with penile CIS, 44 were treated with topical chemotherapy and were followed for a mean of 34 months. A complete response was seen in 25 of 44 patients (57%) while 6 (14%) had a partial response and 13 (30%) had no response. Local toxicity was seen in 10% of patients.

For men with penile CIS, an alternative to topical chemotherapy is glans resurfacing. There is sparse data on this approach with published data available for a total of 51 patients. Positive margins were identified in 3 (6%) and recurrences identified in 2 (4%) of follow-up ranging between 16 and 30 months.

Dr. Pettaway highlighted data from an international multicenter experience on the treatment of penile CIS. Among 5 international centers, 201 patients were accrued and were treated with circumcision, glansectomy, wide local excision, laser, and glans resurfacing. Recurrences were relatively common, occurring in 48 patients with the vast majority (>80%) occurring by the 5th year after treatment. Most recurrences were among patients treated with laser therapy. 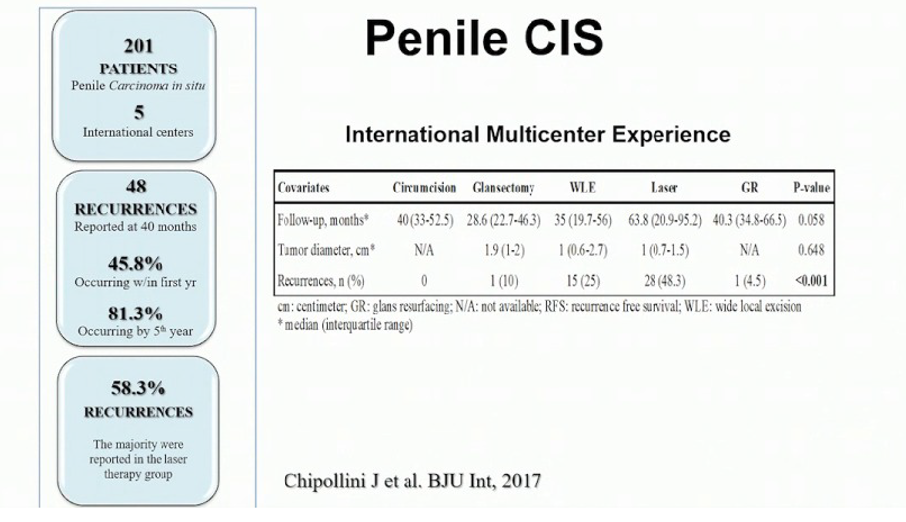 Dr. Pettaway then continued a case of penile CIS in which the patient developed urethral recurrence at 8 years. The patient was treated with a glans-sparing partial penectomy and distal urethrectomy.

He then moved to a second case in which a patient has already undergone an excision biopsy for a glandular lesion with a positive margin. Dr. Karnes highlighted the importance of penile MRI in local tumor staging. On T2-weighted MRI, the corpora spongiosum and cavernosum are white allowing identification of invasion. Computed tomography of the abdomen and pelvis allows for nodal staging. In this case, Dr. Pettway conveyed that the patient refused re-resection with partial penectomy. Dr. Hoffman then discussed the role of radiotherapy for penile cancer. While this is a rarely used treatment for penile cancer, according to the European Association of Urology (EAU), National Comprehensive Cancer Network (NCCN), and American Brachytherapy Society-Groupe Européen De Curiethérapie-European Society of Therapeutic Radiation Oncology (ABS-GEC-ESTRO)  guidelines, both brachytherapy and external beam radiotherapy are appropriate. With respect to brachytherapy, ABS-GEC-ESTRO guidelines highlight that this is appropriate for patients with T1b-T2 tumors which are <4cm in maximal dimension. 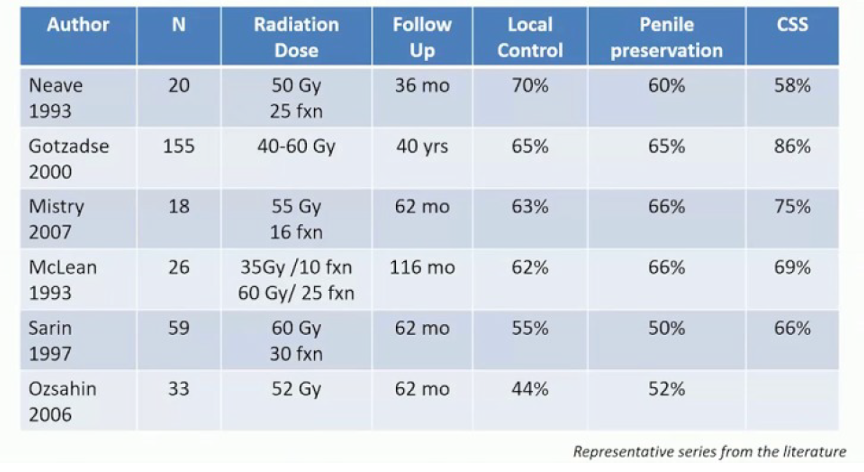 She then discussed brachytherapy. There has been a transition from a low dose rate (LDR) with permanent implants to HR in recent years. Current regimes deliver radiation twice daily over several days. Toxicity is similar to external beam radiotherapy with 80-85% of patients having local control and penile preservation. 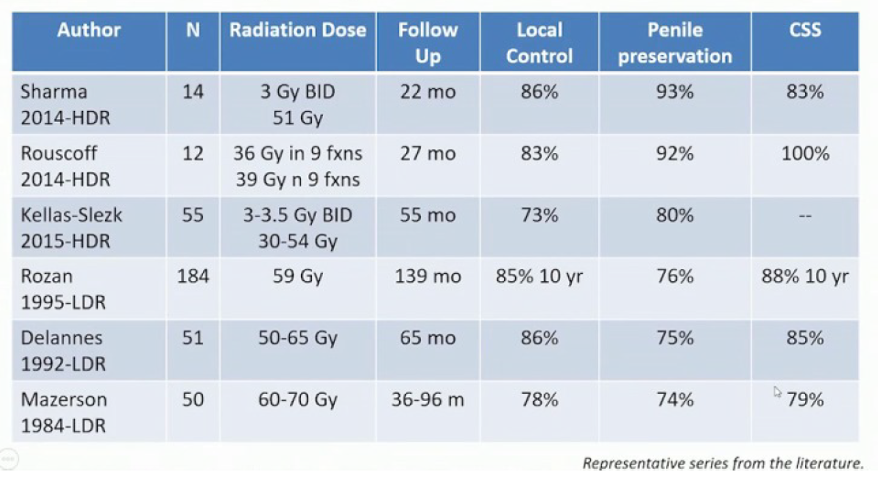 The panel concluded by highlighting the value of penile sparing approaches including quality of life, urinary function, and sexual function. Penile preservation is feasible in patients with Ta, T1, Tis, and small distal T2 tumors. These approaches are associated with local recurrence however survival is not adversely affected.