(UroToday.com) In this session discussing what the urologist needs to know about genetic testing, several topics were presented. These included:

The session began with Leonard Gomella, MD, giving a talk on the basic concepts in genetic testing for prostate cancer. He began his talk, stating that the human genome project began in 1990 and continued until 2003, discovering 3.2 billion base gene pairs. It is important to understand the difference between inherited germline mutations (coming from parents) and somatic mutations that can also be detected in tumors and may guide therapy (Figure 1). 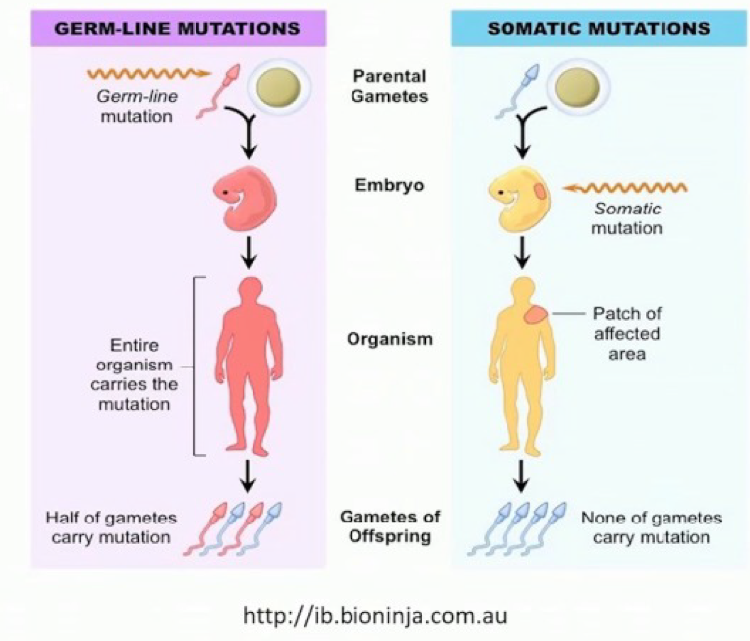 Prostate cancer is hereditary in 10 to 15% of cases. It is often due to a single inherited genetic mutation and greatly increases the lifetime risk of the disease. Commonly involved genes include BRCA1, BRCA2, Lynch syndrome, and HOXB13.

In approximately 15 to 20% of cases, prostate cancer can be familial, with some features of hereditary cancer present, but no detectable mutation is identified. It could be due to possible genetic and environmental risk factors, and there's no doubt that close family members who had prostate cancer signify an increased risk.

Lastly, 70 to 80% of prostate cancer cases are sporadic with an exact cause that is unknown, with no features of hereditary or familial cancers and with no increased risks for close family members.

It is important to do genomic germline testing because there can be a potential impact on the therapeutic options, especially if the mutations are in the so-called "actionable genes," which may guide treatment. There is also the potential to screen or prevent other at-risk cancers in the patient himself and in his family.

Most prostate cancer mutated genes appear to be related to defects in the DNA repair mechanism, with some of these shown in Table 1.

When the DNA damage response (DDR) genes mutate, it can result in genomic instability and increased cancer risk. For instance, there is a: 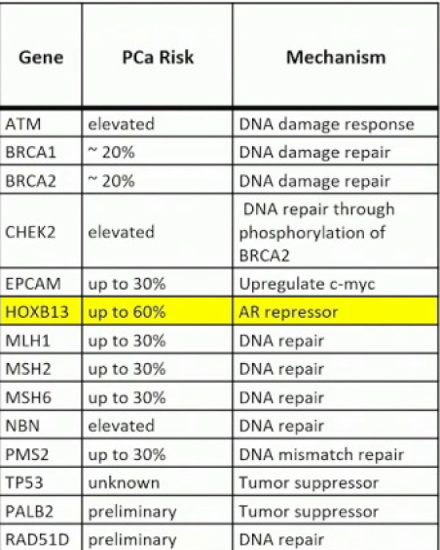 In a recently published paper in The New England Journal of Medicine, it was shown that in metastatic prostate cancer, germline mutations occur in 11.8% of patients versus 4.6% in localized disease, with BRCA2 consisting of 44% of these mutations1 (Figure 2). 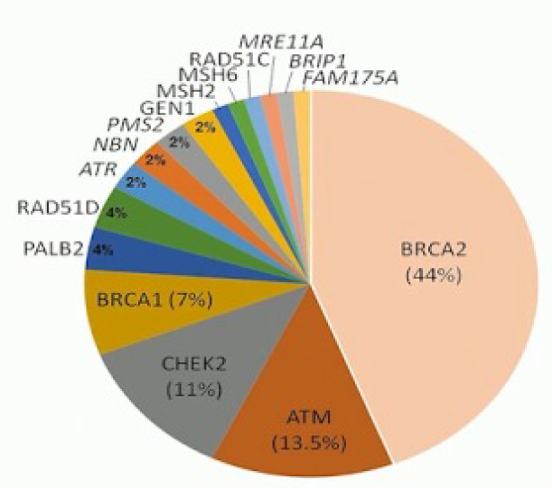 The genetic evaluation topic is gaining momentum, and in 2017 the NCCN guidelines published the first recommendations for BRCA 1 and BRCA 2 screening in patients with prostate cancer.

In 2017 a consensus was reached in the Philadelphia Prostate cancer conference (Figure 3). In 2019, in the same conference, there was further exploration of the implementation of germline mutation testing in prostate cancer patients (Figure 4). Dr. Gidi continued and presented an initial recommendation for a framework for prostate cancer genetic evaluation. 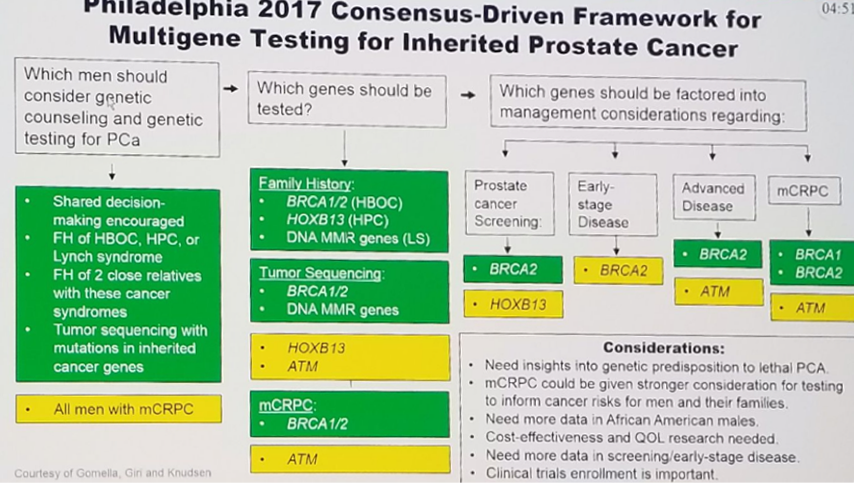 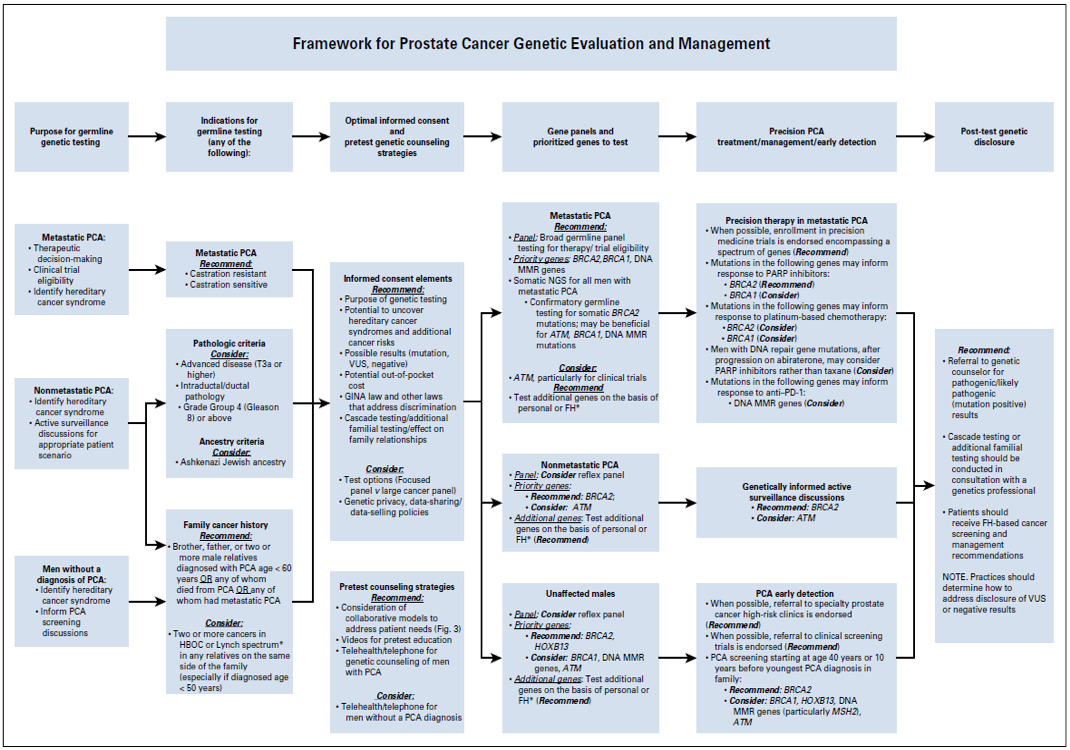 Dr. Giri summarized her interesting talk stating that germline testing for prostate cancer is rapidly evolving. The consensus-driven implementation framework is an effort to provide guidance to provides and patients regarding various facets of implementing germline testing in practice. Proactive collaboration with genetic counselors is needed for optimal genetic evaluation tailored to individual patient needs. There are areas that further research is required; emphasis should be placed on provider education about genetic testing, and collaborative counseling models.

In the next part of this session, Todd Morgan, MD, discussed a streamlined approach to germline testing, composed of 5 distinct steps:

According to Dr. Morgan, germline genetic testing should be offered to patients with:

Testing should be considered based on intermediate or high risk localized prostate cancer without a positive family history, and when we encounter intraductal or ductal pathology.

When assessing familial risk, it is important to have the family history standardized with relevant components. When obtaining consent for the test, it is important to explain to the patient the purpose of the test and the various genes that are being tested. It is important to mention the accuracy of testing, the possible testing outcomes, the various testing options, the risks associated with genetic discrimination, the costs, and lastly, the implications of finding out if a hereditary syndrome exists and the cascade testing that will be required afterward.

Genetic testing can be done using either blood or saliva. It can be a single gene or panel of defined gene subset that are tested. The panels typically include the DNA damage repair genes, which include ATM, BRCA1, BRCA2, CHEK2, and others, depending on the specific testing panel.

Dr. Morgan concluded his elegant talk summarizing the possible results of genetic testing. If the testing comes back positive, it is important to refer the patient for genetic counseling and perform cascade testing. If the testing is negative, no further cascade testing or counseling is usually required. Lastly, if the test result is defined as a variant of uncertain clinical significance (VUS), most would treat this as a negative test until further information is available.

Summarizing the session, Dr. Gomella emphasized the emerging role of genetic testing in prostate cancer. He mentioned the important role of screening of both the individual and his family members, the role genetic testing may have inactive surveillance, the treatment decisions at all stages, and the precision medicine for advanced disease. Some common prostate cancer-specific panels were shown (Figure 6), and lastly, a condensed algorithm for genetic counseling was demonstrated (Figure 7). 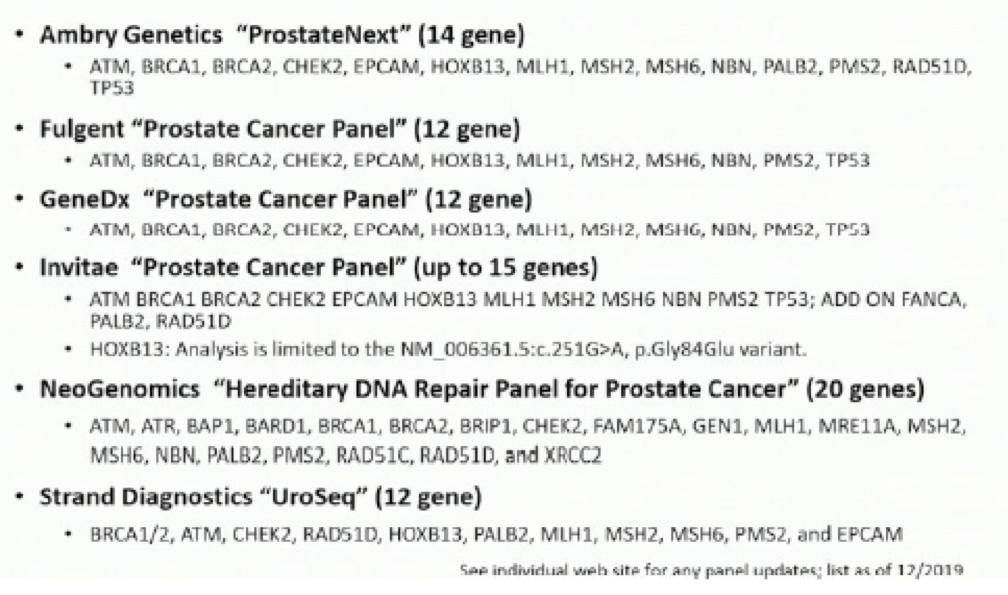 Dr. Gomella moved on to show the Genetic Information Nondiscrimination Act (GINA) that was issued in November 2009, which prohibits genetic discrimination in health insurance, and in employment. However, GINA does not protect against discrimination in life, disability, or long-term care insurance. In the next slide, he summarized the indications recommended for genetic testing (Figure 8).

In conclusion, there are evolving recommendations for prostate cancer genetic testing and decision making. There are many prostate cancer genetic panels available commercially, and providers should become familiar with them. Some may even offer complimentary genetic counselors. The most critical inherited genes today include BRCA 1, BRCA 2, HOXB13, ATM, and CHEK2. There is specifically a high prevalence of germline mutations in patients with metastatic prostate cancer (>11%), and therefore all metastatic castrate-resistant prostate cancer patients should be offered germline testing. It is critical to expand the family history beyond prostate cancer to include a history of ovary, breast, pancreas, and colon cancers. Furthermore, it is critical we try to expand the role of genetic counselors in urological care. 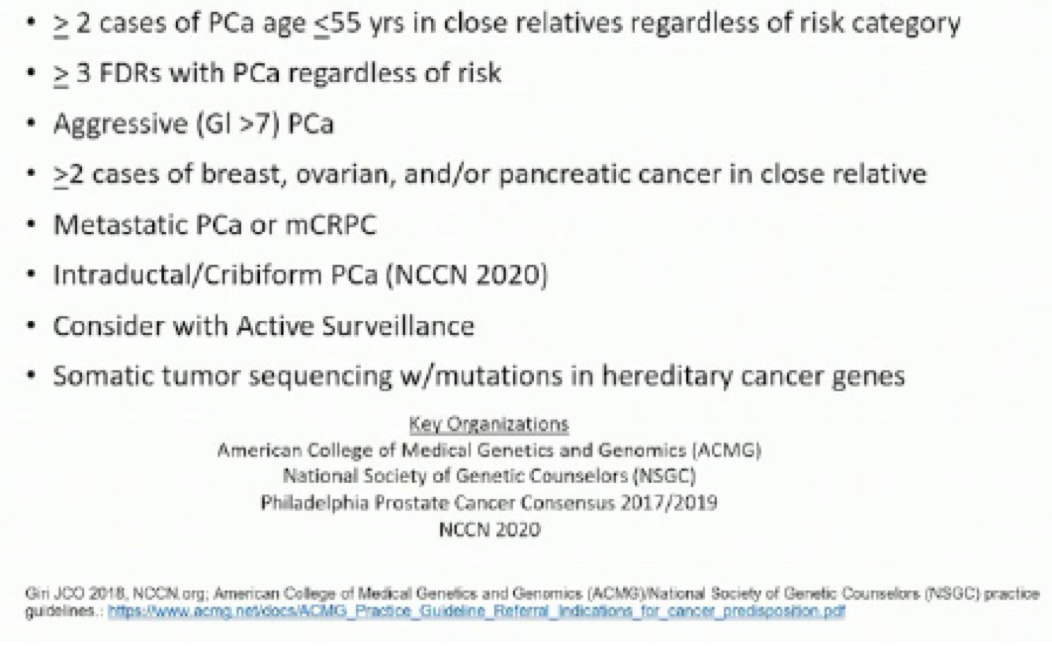