(UroToday.com) 12 core systematic prostate biopsy is the standard of care in the diagnosis of prostate cancer and has been for decades. It has a low sensitivity and specificity in detecting clinically significant cancer. They may only sample 0.04% of the gland,1 and it has difficulty reaching the anterior and apical regions of the prostate,2 while it is less effective in patients with prior negative biopsy. Physicians are, in fact, blind to the tumor locations when performing only a 12-core systematic prostate biopsy.

Recent advances in multiparametric magnetic resonance imaging (MRI) technology currently allow for superior detection of cancer within the prostate. The sensitivity and specificity of multiparametric MRI are up to 90% and 88% in the detection of prostate cancer foci above 0.5 cc.3 With the use of prostate-specific pathology molds, the positive predictive value can be as high as 98%.4

There is no doubt that with an MRI targeted biopsy, we can see much better what we can biopsy (Figure 1). Results from the PROMIS trial, Diagnostic accuracy of multi-parametric MRI and TRUS biopsy in prostate cancer (PROMIS), showed that the sensitivity and specificity of TRUS is 48% and 74%, respectively, while the sensitivity and specificity of MRI is 93% and 89%, respectively.5 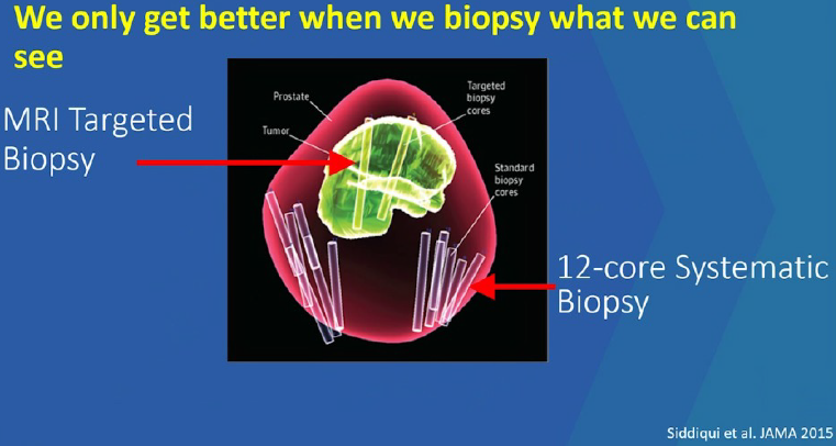 In a prospective cohort study of 1003 men undergoing both multiparametric MRI tumor-targeted and 12 core transrectal ultrasound-guided biopsy, the primary endpoint was to compare each of the modalities in the detection of prostate cancer Gleason grade group of 3 or above. Patients who were biopsied with MRI had 30% more high-risk cancer and 17% fewer low-risk cancers.6 In the more recently published PRECISION study, PRostate Evaluation for Clinically Important Disease: Sampling Using Image-guidance Or Not? (PRECISION), clinically significant cancer was detected in 38% of the MRI targeted biopsy group, compared to 26% in the standard biopsy group.7

It is known that prostate cancer diagnosis is inaccurate with high rates of upgrading in radical prostatectomy, and with an approximately 30% rate of missed diagnosis. This uncertainty often leads to overtreatment as 43% of prostatectomies are done for men, ultimately confirmed to have Gleason 6 disease. Reducing this uncertainty will give the patient and urologist more confidence to enroll in active surveillance protocols.

Currently, the MRI is used with ultrasound using special fusing software, obtaining a more accurate biopsy. There is no doubt that this is superior to TRUS-biopsy alone. However, it is still not clear whether it is sufficient to stand alone? And whether we still need the 12 core-systematic biopsies in addition to the targeted biopsy?

A recently published study in the New-England Journal of Medicine included 2103 men undergoing both MRI tumor-targeted and systematic 12 core-TRUS biopsies during the same biopsy session.9 The primary endpoint was cancer detection according to the Gleason grade group and among those who underwent radical prostatectomy, upgrading, and downgrading of grade group from biopsy to whole-mount histopathology.

The results, shown in Figure 2, show that 8.8% of Gleason grade >2 would have been missed if MRI targeted biopsy would have been done alone. The downgrading and upgrading of cancer grade group after whole-mount histopathological analysis by biopsy method are shown in Figure 3. This shows that upgrading rates for Gleason Grade >=2 at prostatectomy drop from 30.2% to 6.7% when the patient is diagnosed by combined biopsy vs. systematic biopsy alone. 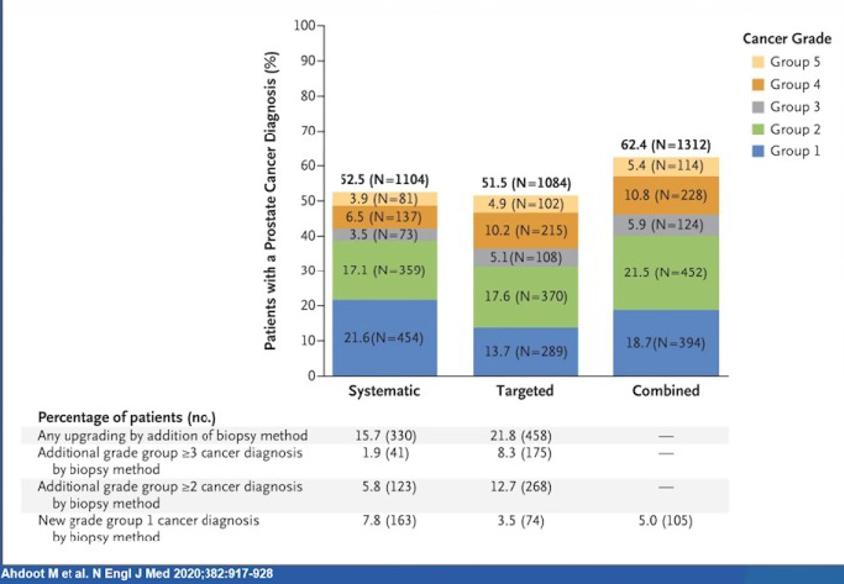 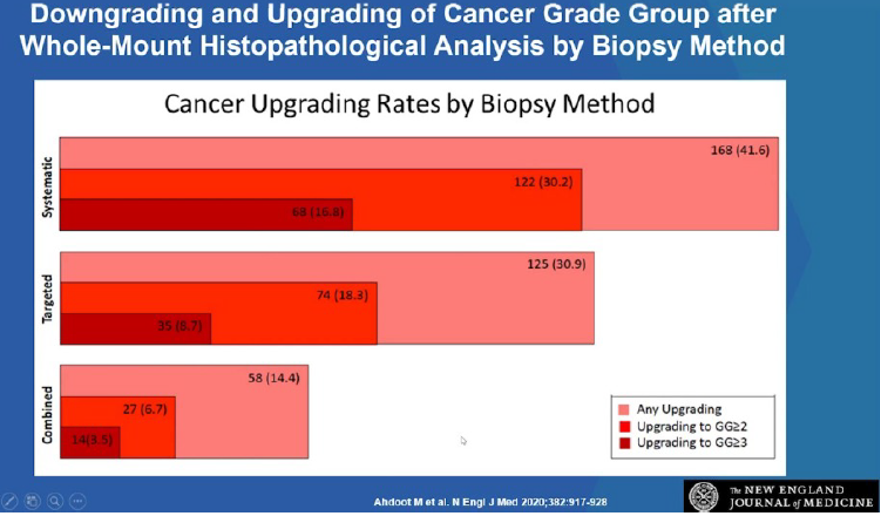 In conclusion, MRI-targeted biopsy alone can still underestimate the histologic grade of some tumors. When MRI visible lesions exist, combined biopsy leads to more detection of all prostate cancers. Following radical prostatectomy, upgrades to group 2 or higher on pathology analysis were substantially lower after the combined biopsy. A combined biopsy will allow physicians to have a more accurate way to diagnose prostate cancer and increase their confidence that they are providing the best treatment for their patients.