(UroToday.com) The TNM grading system for renal cell carcinoma (RCC) has been established and widely used for many years. In it, T3 is defined by a tumor that extends into major veins or perinephric tissues but not into the ipsilateral adrenal gland and not beyond the Gerota fascia. This is subdivided into T3a which is characterized by the tumor which invades perirenal and/or renal sinus fat but not beyond the Gerota fascia or tumor which grossly extends into the renal vein or its segmental (muscle-containing) branches while T3b and T3c are characterized by more extensive thrombus. In the case of T3a, while the invasion of perirenal or sinus fat has been shown to have important prognostic information, it may be difficult to identify on pre-operative imaging. As a result, patients with clinical T2 kidney cancers may be upstaged to pT3a following surgical extirpation. In a podium presentation at the American Urologic Association Virtual Annual Meeting, Aaron Bradshaw and colleagues presented results of a multicenter cohort study examining the survival outcomes of patients with clinical T3a compared to those who were upstaged to pT3a.

The authors undertook a retrospective, multicenter cohort study of patients with RCC with clinical or pathological stage T3a who were treated with surgical excision. The primary outcome of interest was recurrence-free survival (RFS) while secondary outcomes were overall survival (OS) and cancer-specific survival (CSS). The authors considered clinical T3a vs pathologically upstaged T3a as the exposure of interest. Kaplan-Meier analyses (KMA) were conducted to describe RFS, OS, and CSS with a log-rank test comparing survival between these two groups. Cox proportional hazard modeling was utilized for multivariable analysis of the primary outcome. 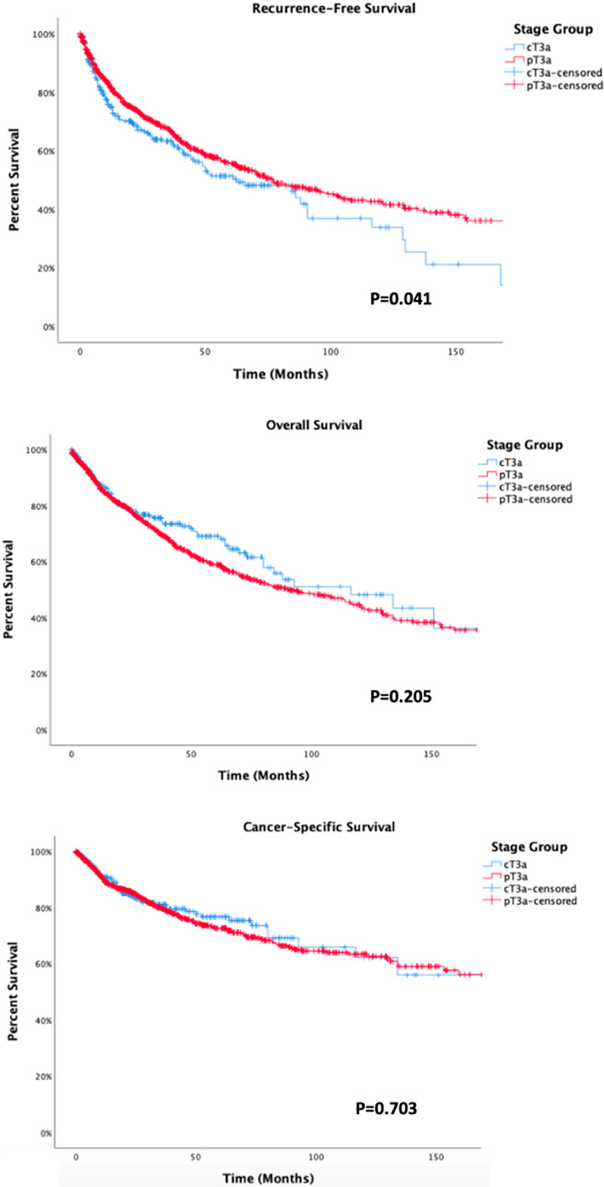 Using this large, multi-institutional dataset, Bradshaw and colleagues demonstrated that, for patients with T3a kidney cancer, the clinically identified extra-renal invasion was not prognostically different than the pathologically upstaged disease.