(UroToday.com) Haematuria is among the most common presentations from primary care to the urology clinic. The underlying rate of malignancy varies according to the severity of haematuria and tumor site. There is significant variation in the evaluation of patients with haematuria between countries, particularly with respect to imaging of the upper tract. In a moderated poster presentation at the American Urologic Association (AUA) 2020 Virtual Annual Meeting, Kevin Gallagher and colleagues assessed the prevalence of urinary tract cancer (UTC) among patients seen for haematuria in secondary care. Secondary aims were to explore reasons for differences in prevalence between countries.

To do so, the authors utilized data from IDENTIFY — The Investigation and DEtection of urological Neoplasia in paTIents reFerred with suspected urinary tract cancer: A multicentre analYsis — a prospective international cohort study. Patients referred to secondary care with symptoms of urinary tract cancer (no previous history of UTC) were included. Data on presenting symptoms, investigations, and diagnoses were recorded in an online database. 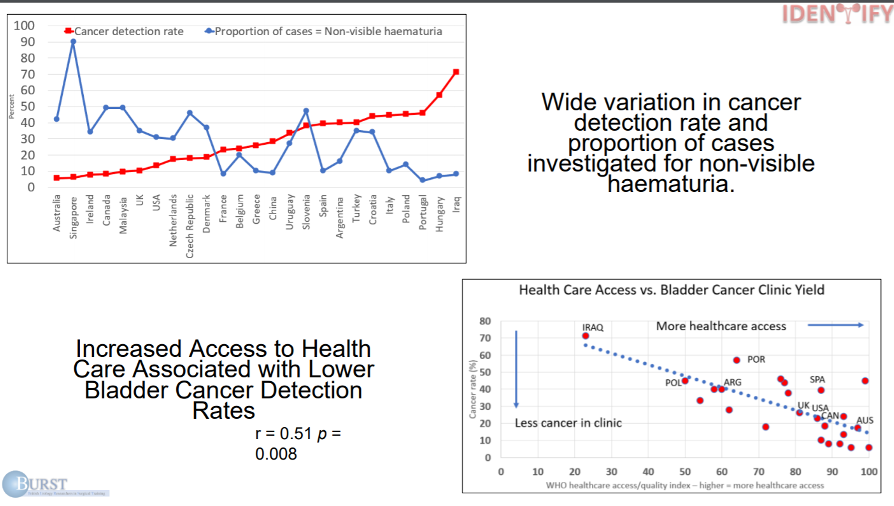 Using a mixed model with age, haematuria type, gender, smoking status, and imaging protocol as fixed effects and country and hospital as random effects the adjusted prevalence of urinary tract cancer in this population was 26.2% (95% CI 18.6-35.5).

Interestingly, the incidence of bladder cancer in the population of each country in 2018 using the international Globocan registry did not significantly correlate with the bladder cancer detection rate in the IDENTIFY study cohort from that country (r=0.24, p=0.25).