(UroToday.com) Most patients newly diagnosed with bladder cancer have non-muscle invasive disease (NMIBC). For patients with intermediate or high-risk non muscle invasive bladder cancer (NMIBC) and those with carcinoma in situ (CIS), adjuvant treatment with BCG is guideline-recommended on the basis of proven benefits in disease recurrence. While BCG is efficacious, many patients (up to 40%) eventually develop BCG-unresponsive disease and are at risk for tumor recurrence and progression. For many years, there have been very limited options for these patients. Identification of genomic alterations associated with response to BCG could identify novel approaches to prevent or delay recurrence. In a podium presentation at the American Urologic Association Virtual Annual Meeting, Timothy Clinton, MD, and colleagues presented results of their work exploring tumor evolution under the selective pressure of BCG therapy utilizing targeted exon capture sequencing (IMPACT) to compare tumor collected pre- and post-BCG treatment.

The authors utilized matched specimens from 18 patients who received BCG therapy for high-grade NMIBC. Included patients were classified as having BCG unresponsive or late-relapsing disease: BCG unresponsive tumors were those with recurrent high-grade disease within 12 months after completion of adequate BCG while BCG late-relapsing tumors were those with high-grade recurrence over 12 months after BCG treatment. IMPACT testing was performed on both pre- and post-treatment tumor specimens.

The authors found a high level (80%, IQR 65-96) of mutational concordance between pre-treatment and post-BCG-treatment specimens, as shown in the following figure: 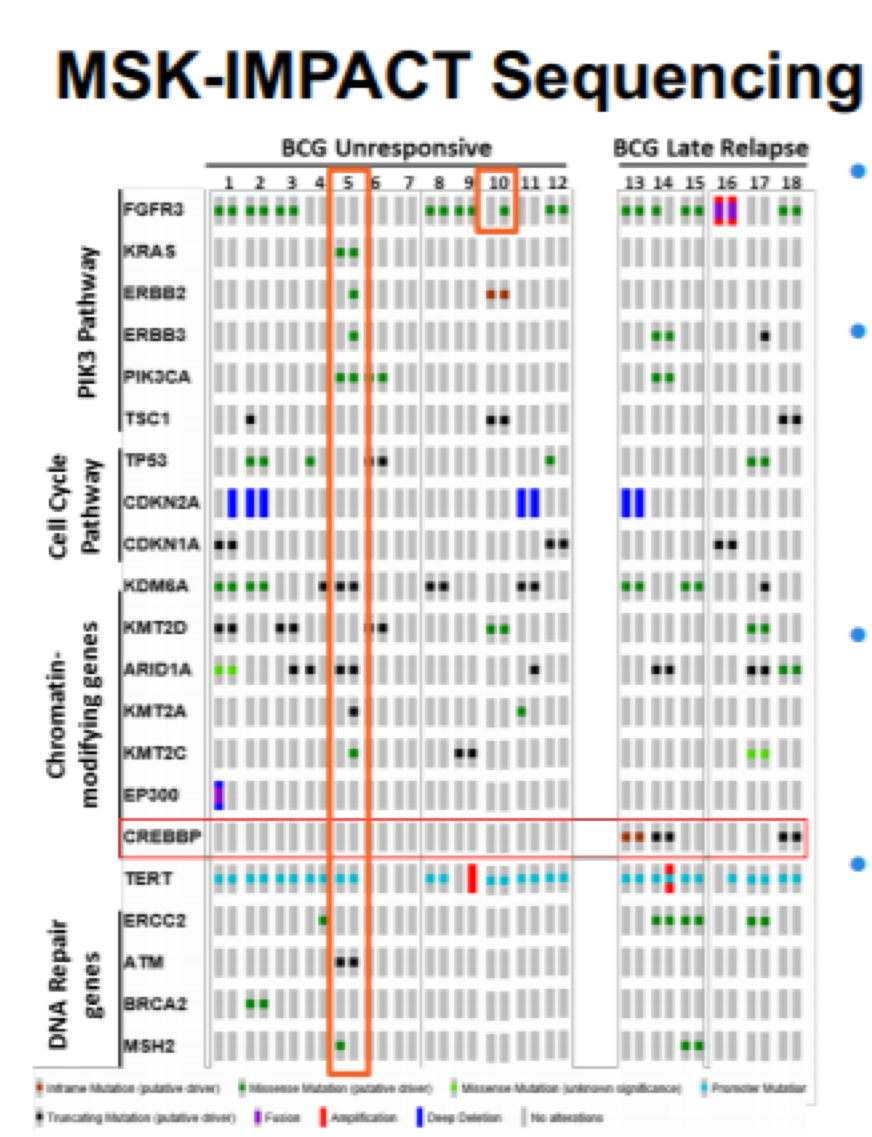 Tumor mutation burden was similar in pre- and post-treatment specimens: median 7 in both (p=0.88).

Notably, three patients gained a potentially actionable mutation post-BCG, which may have implications for the use of systemic therapy.

There were no significant differences with respect to age, gender, number of tumors, smoker, tumor size or cT-stage in BCG-unresponsive vs late-relapsing disease on univariate analysis. Comparing genomic alterations, a significant difference in the presence of a CREBBP mutation was detected between these two cohorts (p=0.03). As a chromatin modifying gene, mutations in CREBBP may potentially be actionable with histone deacetylase inhibitors.

The authors conclude that there is high concordance in the genomic profiles of NMIBC tumors before and after BCG therapy. They identified a few cases in which there were new actionable mutations which may have important implications for further systemic therapy.