(UroToday.com) Radical cystectomy (RC) is known to have significant perioperative complications with rates of readmission approaching 50% in some series. The use of robotic approaches was hoped to decrease the morbidity associated with radical cystectomy. This is supported by retrospective cohort studies. While powered for oncologic outcomes, the RAZOR trial is the largest randomized trial that has assessed perioperative outcomes. In a moderated poster presentation at the American Urologic Association Virtual Annual Meeting, Vivek Venkatramani, MD, and colleagues report on their analysis of postoperative complication rates and evaluated predictors of complications up to 3 months following RC in patients from the RAZOR trial.

The authors found no significant difference in overall and major complication rates between RARC and OC. Gastrointestinal (predominantly ileus) and urinary tract infections were the most common complications in both groups. Female sex (OR 1.84, 1.08-3.16, p=0.026) and frailty (sFI ³3) (OR 5.90, 2.65-13.14, p<0.0001) were significant predictors of major complications at 90 days postoperatively. Surgical approach (RARC or OC), diversion type, chemotherapy, lymphadenectomy extent, age, T or N stage, and BMI were not predictive (Table). 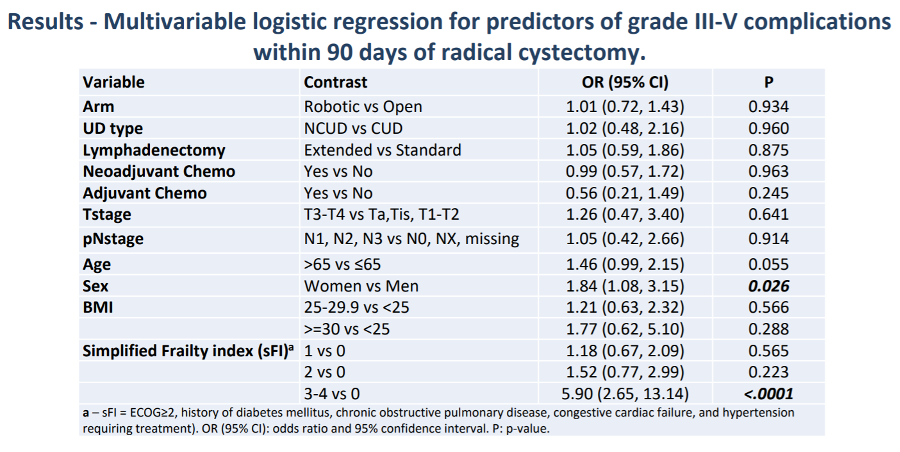 Despite hope based on non-randomized data, analysis of the largest RCT to date demonstrates that postoperative complication rates do not differ between RARC and ORC in this analysis from the RAZOR trial. These data suggest that inherent patient factors, rather than surgical technical factors, drive postoperative complications following cystectomy.