Chicago, IL (UroToday.com) In light of the shortcomings of traditional two-dimensional imaging modalities such as CT and MRI, researchers at the University of California, Irvine sought to assess virtual reality models as a preoperative planning tool for laparoscopic donor nephrectomy.

The investigators recruited 14 patients undergoing donor nephrectomy, and used the patients’ CT images to create patient-specific volumetric renderings, which were viewed in an immersive virtual reality environment using the Oculus Rift headset (the same one that’s used for virtual reality video games) (Figure 1). Surgeons and patients responded to questionnaires preoperatively regarding their understanding of the planned nephrectomy and the renal anatomy. Surgeons also rated the accuracy of the models postoperatively. Operative outcomes were recorded.

The presentation was followed by a discussion regarding the future of virtual and augmented reality in medical imaging. 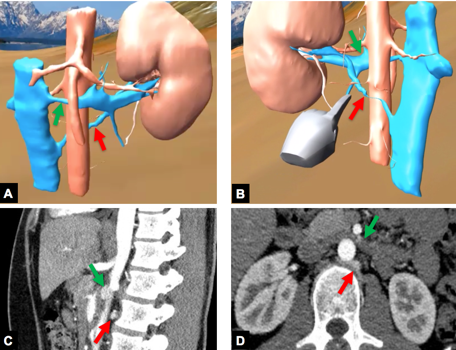