The SAKK 09/10 was a multicenter, randomized phase III trial performed across 24 centers in Switzerland, Germany, and Belgium. This trial included 350 patients with biochemical progression (PSA 0.1 – 2.0 ng/ml) who were randomized to 64 Gy versus 70 Gy to the prostate bed. These patients did not receive ADT or pelvic nodal radiotherapy. This trial did not find a difference in freedom from biochemical progression at a median follow up of 6 years.1 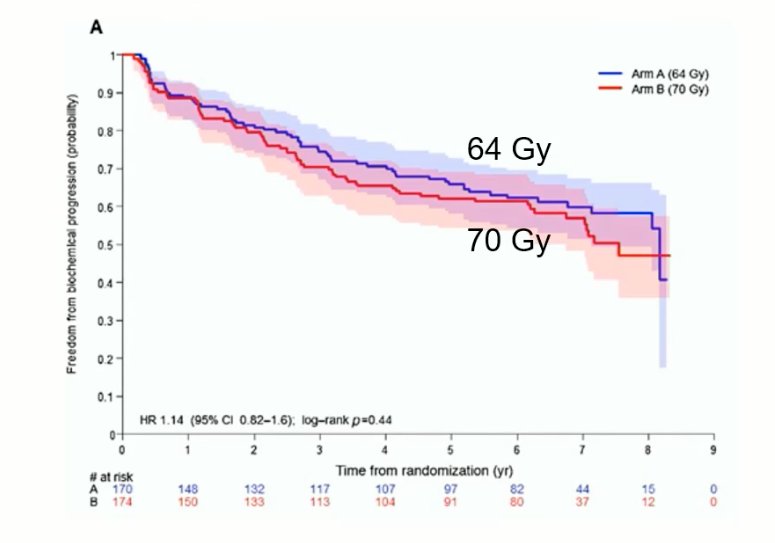 Can PORTOS act as a predictive biomarker? PORTOS is an expression signature of 24 DNA damage repair and immune pathway genes. Patients with high PORTOS scores have been shown to potentially benefit from post-operative radiotherapy in a matched, retrospective analysis.3

Out of the 226 patients with transcriptomic data, 16.4% had a high PORTOS score. Baseline variables including age, WHO performance status, pre-operative PSA, and proportion of positive surgical margins, extraprostatic extension, seminal vesicle invasion, lymphovascular invasion, and lymphadenectomy type were well-balanced between the specimens with low and high PORTOS scores. There were similarly no significant differences in the radical prostatectomy pathologic parameters and radiotherapy technique administered (3D-CRT versus IMRT/rotational techniques). 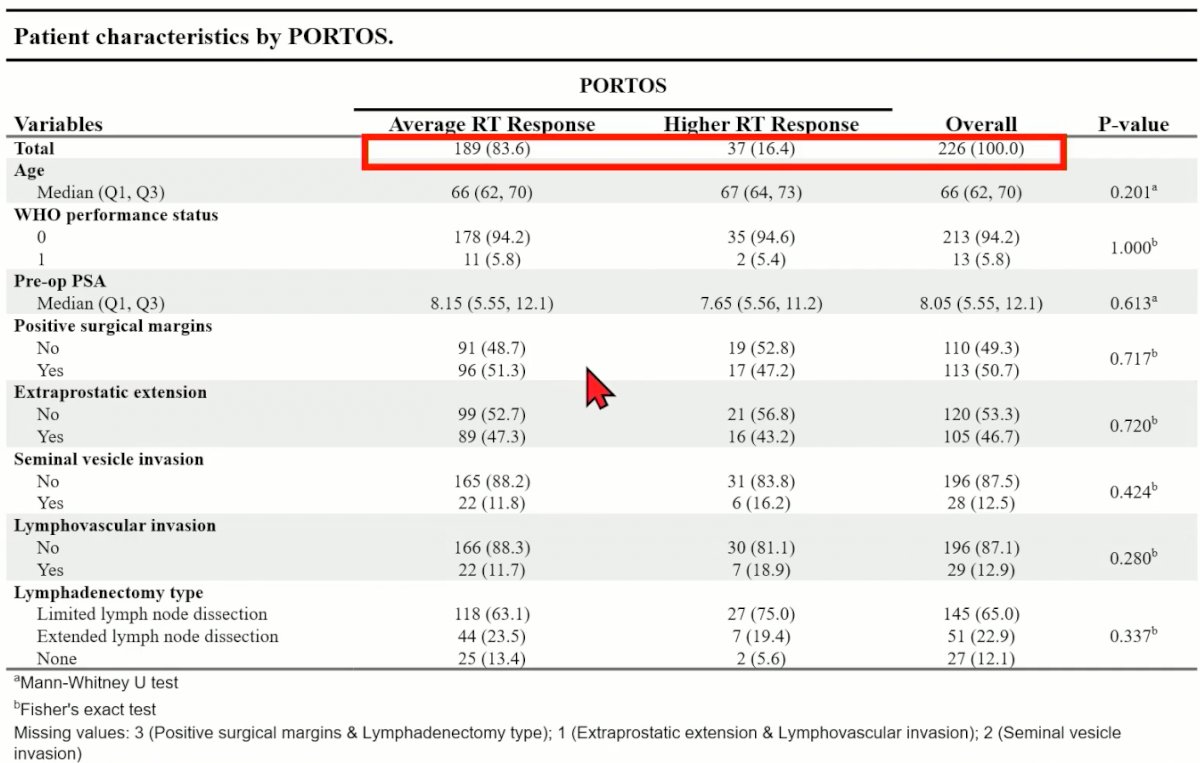 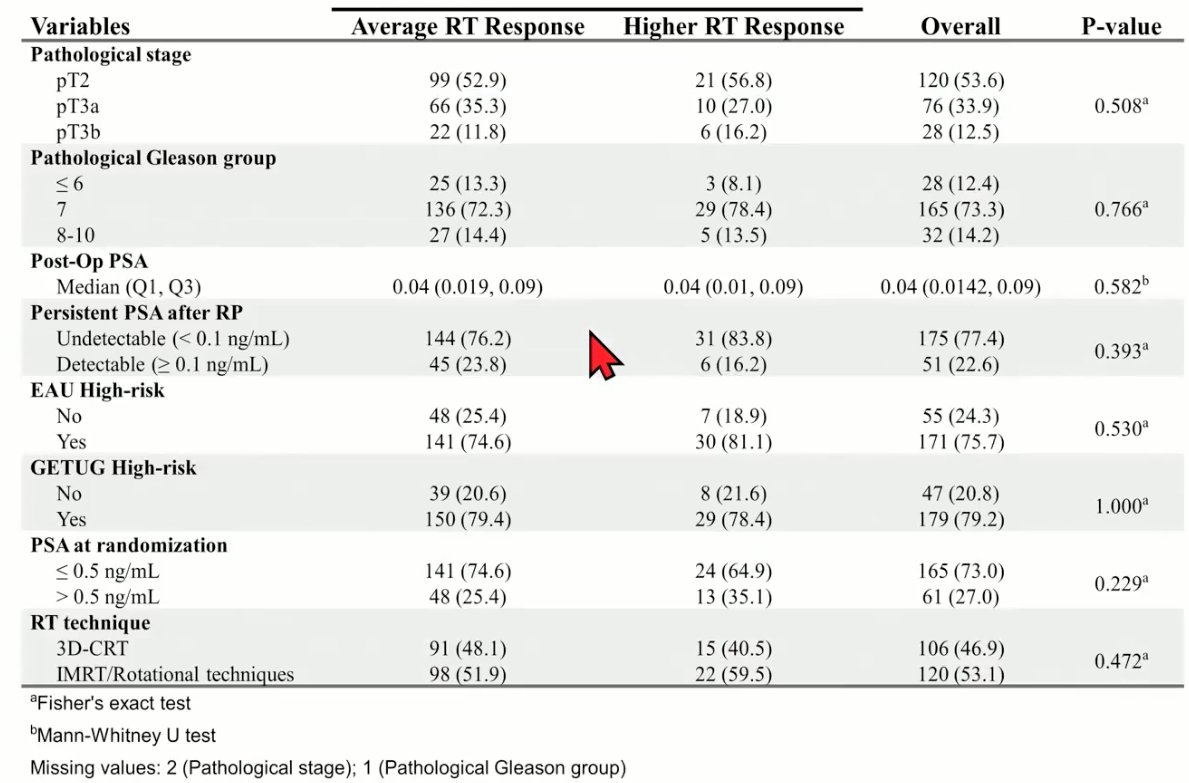 The PORTOS score was found to not be prognostic of clinical progression-free survival rates as demonstrated below:

The predictive ability of PORTOS was not limited to clinical progression free survival outcomes, but also a biochemical failure, metastasis-free, and progression-free survival rates. 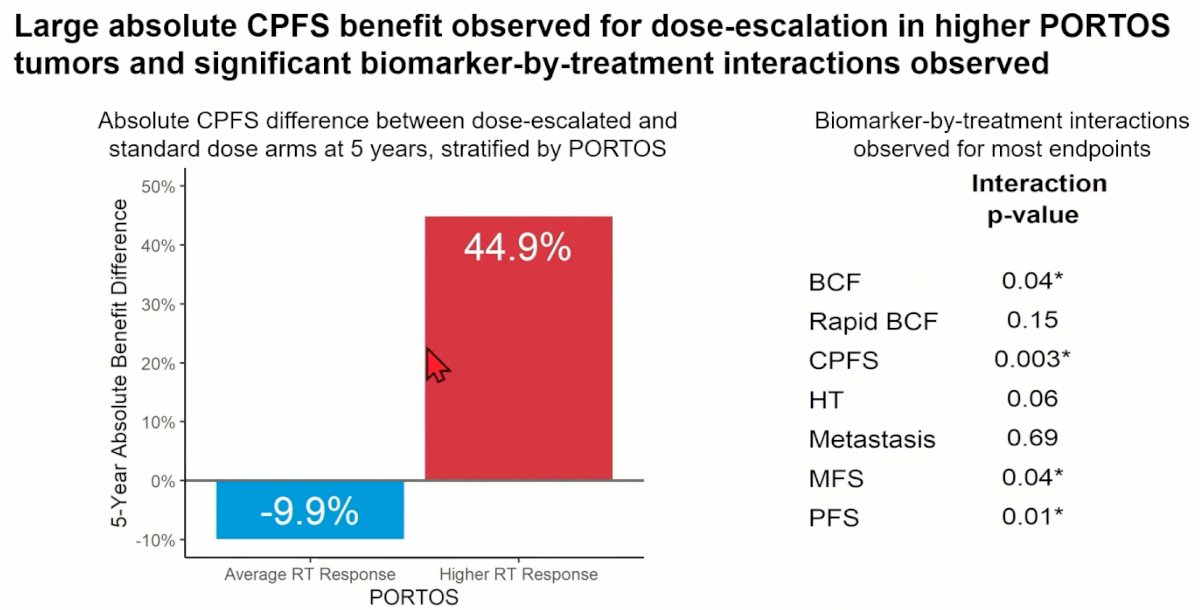 In his discussion, Dr. Dal Pra noted that although there are strong prognostic biomarkers such as Decipher®, we urgently need predictive biomarkers. How do we explain the dose-escalation benefits in higher PORTOS tumors? He hypothesized that this is likely due to differences in DNA Damage Repair pathways, differential immune profiling, and difference in hypoxia levels. He noted that in view of the SAKK 09/10 trial results, PORTOS could help select patients for dose-escalation (e.g. 70 Gy) versus lower doses to the prostate bed. He did note that these results are based on a retrospective exploratory analysis of a phase III trial and that further validation is required.