(UroToday.com) The 2022 American Society for Radiation Oncology (ASTRO) Annual Meeting held in San Antonio, TX between October 23rd and 26th, 2022 was host to a State of the Art session for the selection and treatment of localized prostate cancer. Karthik Meiyappan presented transcriptomic analysis of ATM expression in localized prostate cancer and its implications for radiotherapy treatment.

Ataxia Telangiectasia Mutated (ATM) gene is a DNA Damage and Repair (DDR) gene that is activated by radiation exposure via direct DNA damage and oxidative stress mechanisms. Mutations of this gene have been implicated in many cancers including Ataxia Telangiectasia, breast cancer, bladder cancer, and melanoma. ATM deficient or defective cells have been shown to have increased radiosensitivity. Prostate cancer patients with somatic or germline ATM mutations have been shown to have higher grade disease, lower PSA at diagnosis, and such mutations are present in 30 – 40% of mCRPC patients.1-4

The authors hypothesized that higher ATM expression is a predictor of differential outcomes after radiotherapy.

To this end, the authors included patients from 3 cohorts:

The baseline patient characteristics and previous treatments received by patients in these cohorts are demonstrated in the table below: 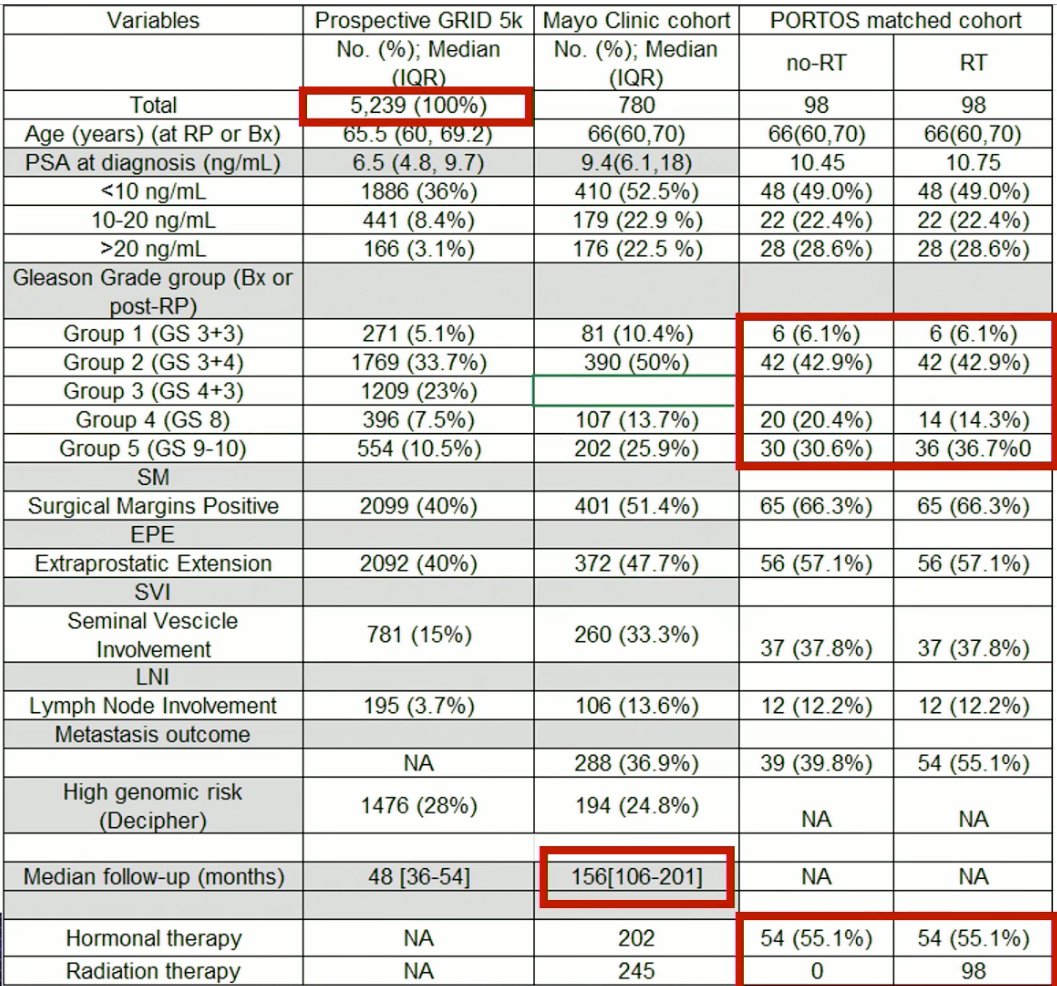 The authors first used the GRID cohort to evaluate gene expression of ATM, CDK12, ATR, PARP1, BRCA1, and BRCA2. The authors noted that gene expression was highly expressed for ATM, DK12, ATR, and PARP1, but not BRCA1/2. Furthermore, correlative studies demonstrated high co-expression between these 4 genes, but not with BRCA1/2. 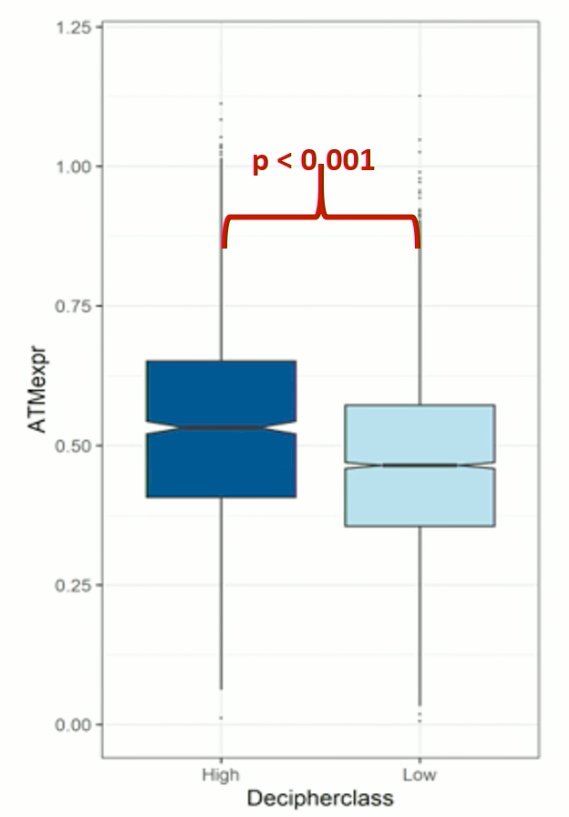 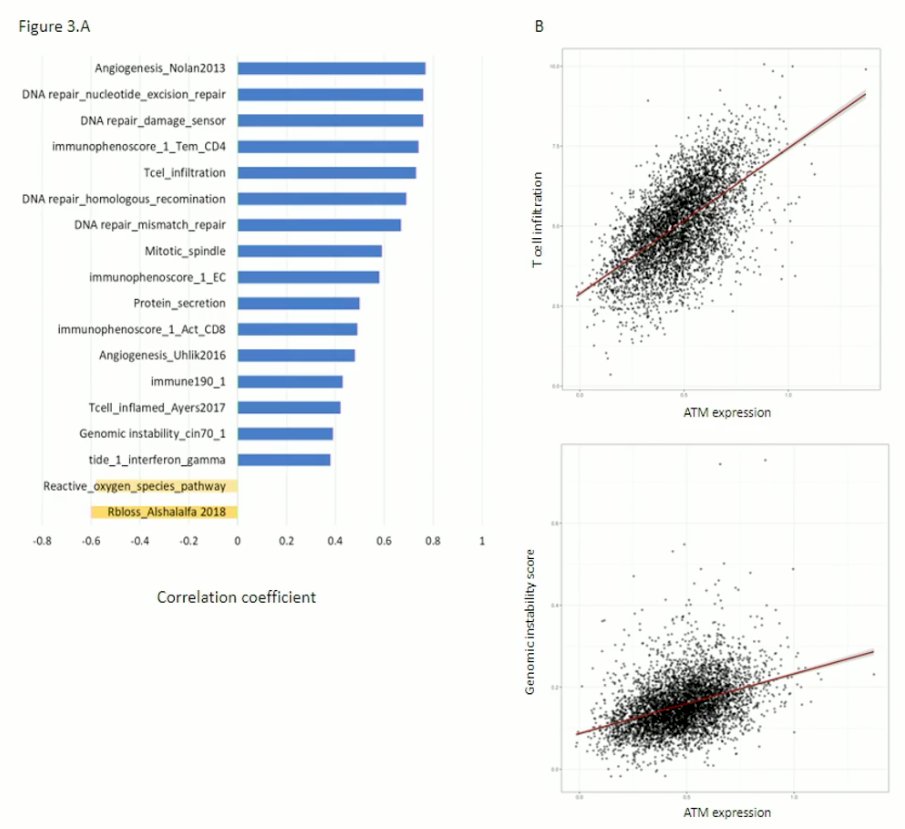 Using data from the Mayo cohort, it was demonstrated that high ATM expression was associated with worse MFS and PCSM: 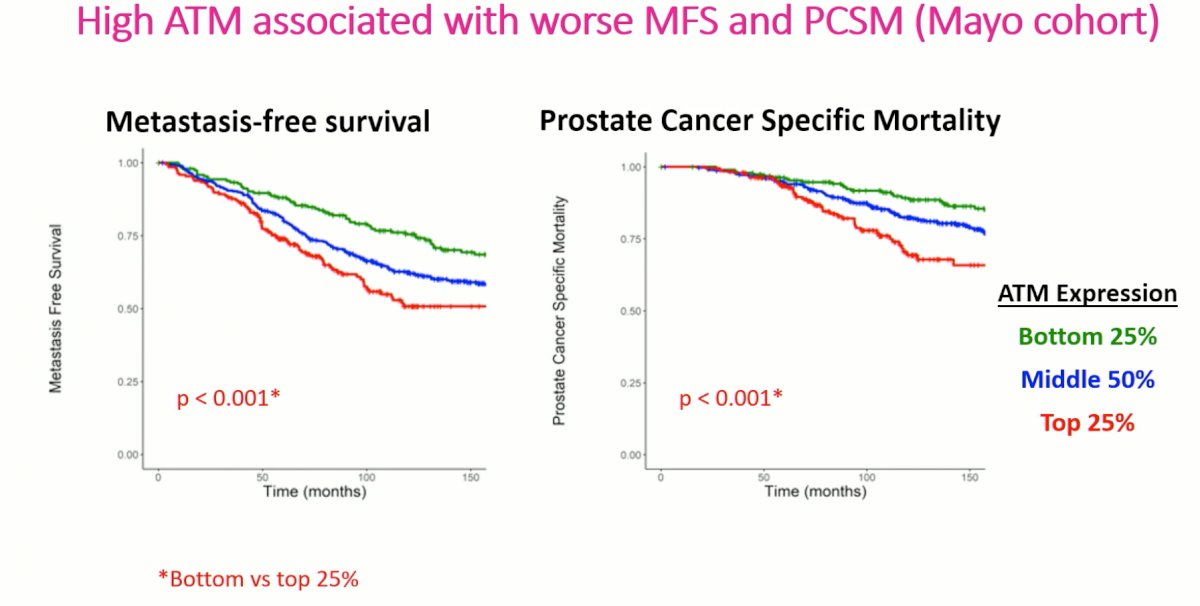 The authors discussed that these results suggest that ATM expression can act as a prognostic biomarker for MFS and PCSM, confirming preliminary findings observed in oligometastatic patients from the STOMP1 and ORIOLE2 trials. ATM expression can also act as a predictive biomarker for radiotherapy response. The authors postulated that the worse outcomes in patients with high ATM expression treated with radiation therapy may be due to improved DNA damage response, conferring radio-resistance, and thus increased hazard of disease progression and metastasis.

The presenter concluded his presentation with the following take home messages: