(UroToday.com) The 2022 ASTRO annual meeting featured a session on managing challenging bladder cancer cases, including a presentation by Dr. Leslie Ballas discussing node-positive and oligometastatic disease. Dr. Ballas started her presentation with a clinical scenario of an 80 year old man with a 1-2 year history of gross hematuria who presented to the emergency department with clot retention. His CT of the abdomen and pelvis showed a lobulated bladder mass with no mention of lymphadenopathy. A subsequent TURBT demonstrated high-grade invasive papillary urothelial carcinoma with invasion into the lamina propria and muscularis propria. A CT of the chest was negative for metastasis and he was referred for trimodality therapy. In work-up for SWOG/NRG 1806, restaging imaging with CT of the abdomen and pelvis showed a 1.5 cm left pelvic lymph node: 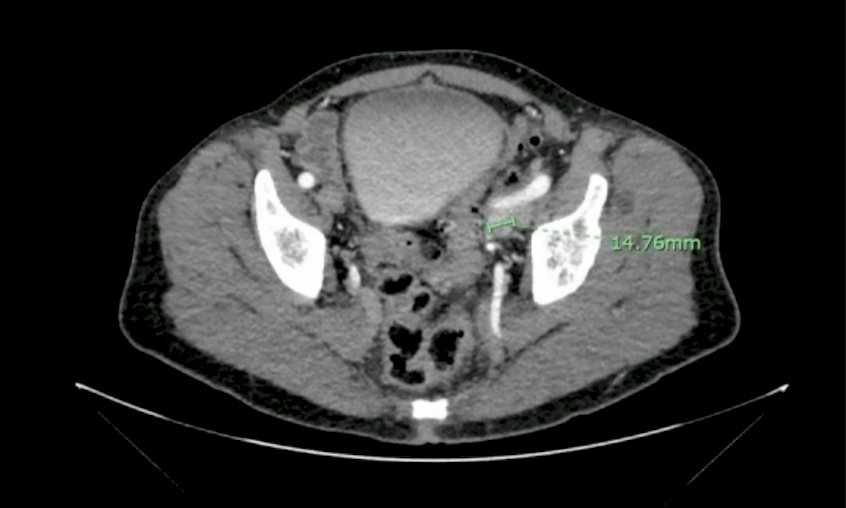 A key clinical trial in this disease space is the ECOG-ACRIN 8185 INSPIRE trial, which is the first prospective study for clinical lymph node positive bladder cancer patients, a population that has historically been underrepresented in advanced bladder cancer trials and has been ineligible for bladder sparing trials. The trial schema for INSPIRE is as follows:

Dr. Ballas then discussed a second clinical scenario of a 76 year old male that presented with an elevated PSA of 6.6 ng/mL and hematuria. His prostate biopsy showed high grade PIN, and cystoscopy showed a bladder mass. A CT urogram showed no evidence of lymphadenopathy and subsequent TURBT demonstrated high grade urothelial carcinoma with invasion into the muscularis propria. The patient asked to undergo bladder preservation, and in the workup for eligibility on SWOG/NRG 1806, a CT chest showed a 1.5 cm right upper lung cavitary nodule: 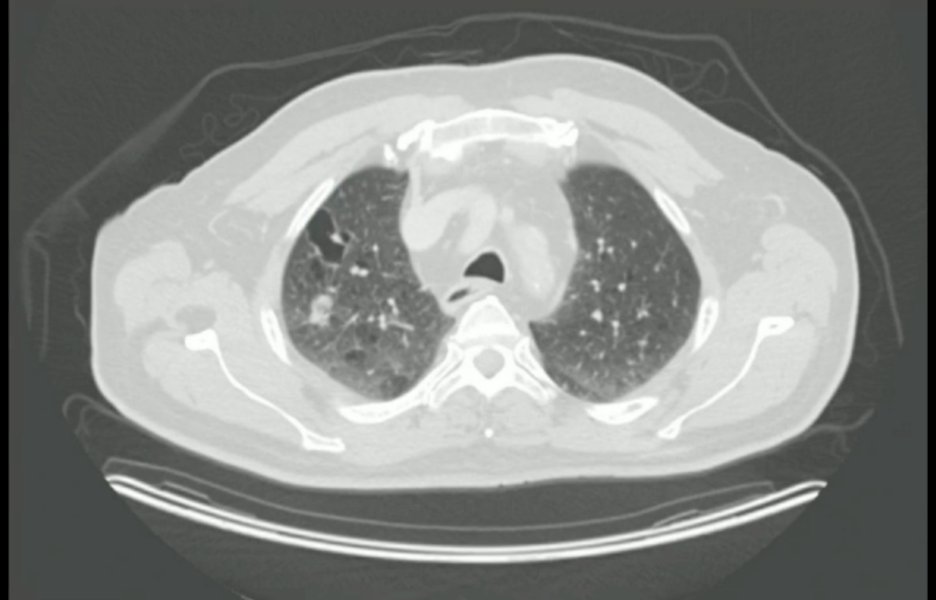 Dr. Ballas then discussed oligometastatic bladder cancer. With regards to assessing the impact of metastasectomy, a phase 2 trial from 1995-1999 enrolled 70 patients (52 men, 18 women) refractory to MVAC chemotherapy. Of note, 73% of patients had <= 2 sites of disease, and the median age was 64 years of age. The median survival was 7 months (1 year survival rate: 30%), and prognosis was independent of metastasis site. There was no benefit from surgery, however symptomatic cancer benefited from surgery in terms of tumor-related symptoms and performance score. Asymptomatic patients felt a reduced sense of well-being post-operatively. There have also been 11 retrospective studies ranging in size from 15-114 patients that have assessed the impact of metastasectomy. Findings have been inconsistent, with some patients deriving an OS benefit and others with no benefit. It appears that patients with lung lesions < 3 cm may have the opportunity to derive the greatest benefit. Additionally, absence of multiple visceral metastases, small volume disease, and use of perioperative chemotherapy seem to be associated with better response.

Some data may for stereotactic body radiotherapy may be abstracted from multi-disease site clinical trials. The SABR-COMET trial [2] was a randomized, open-label phase II study of patients with oligometastatic disease (up to five sites) between February 2012 and August 2016. This trial included patients with prostate, lung, breast, colorectal, and “other” cancer patients. The 5-year OS rate was 17.7% (95% CI 6-34%) in the standard of care arm versus 42.3% (95% CI 28-56%) in the stereotactic body radiotherapy arm (stratified log-rank p = 0.006): 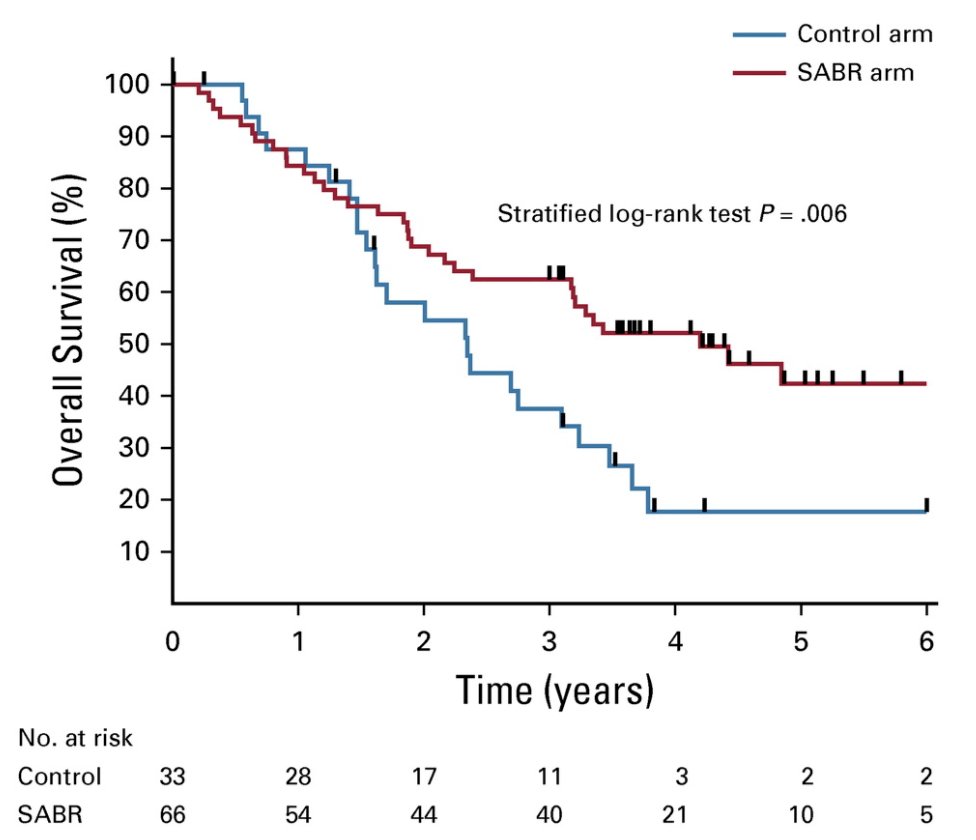 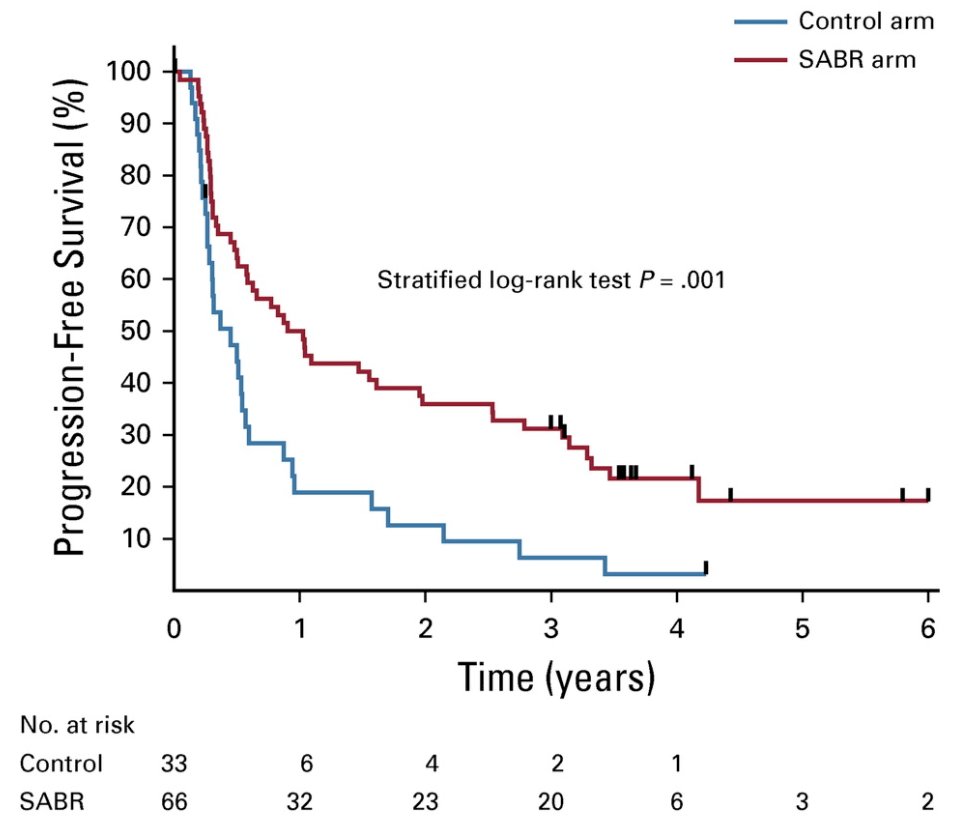 A recent combined analysis of the STOMP and ORIOLE trials [3] found that over a median follow-up for the whole group of 52.5 months, the median PFS was prolonged using metastasis-directed therapy compared with observation (pooled HR 0.44, 95% CI 0.29 to 0.66):

With regards to the impact of metastasis-directed therapy with radiotherapy, a Stanford retrospective analysis assessed 22 patients with metastatic urothelial carcinoma who received consolidative radiotherapy after partial response to chemotherapy. Patients were treated with 25-56 Gy of IMRT, with multiple nodes having a 18x greater odds for disease relapse after radiotherapy compared with single-node metastasis. Ultimately, 36% of patients were rendered disease-free at 6 years and the median PFS of19 months was better than surgical data but are also more modern. As follows are the stereotactic body radiotherapy trials in urothelial carcinoma patients: 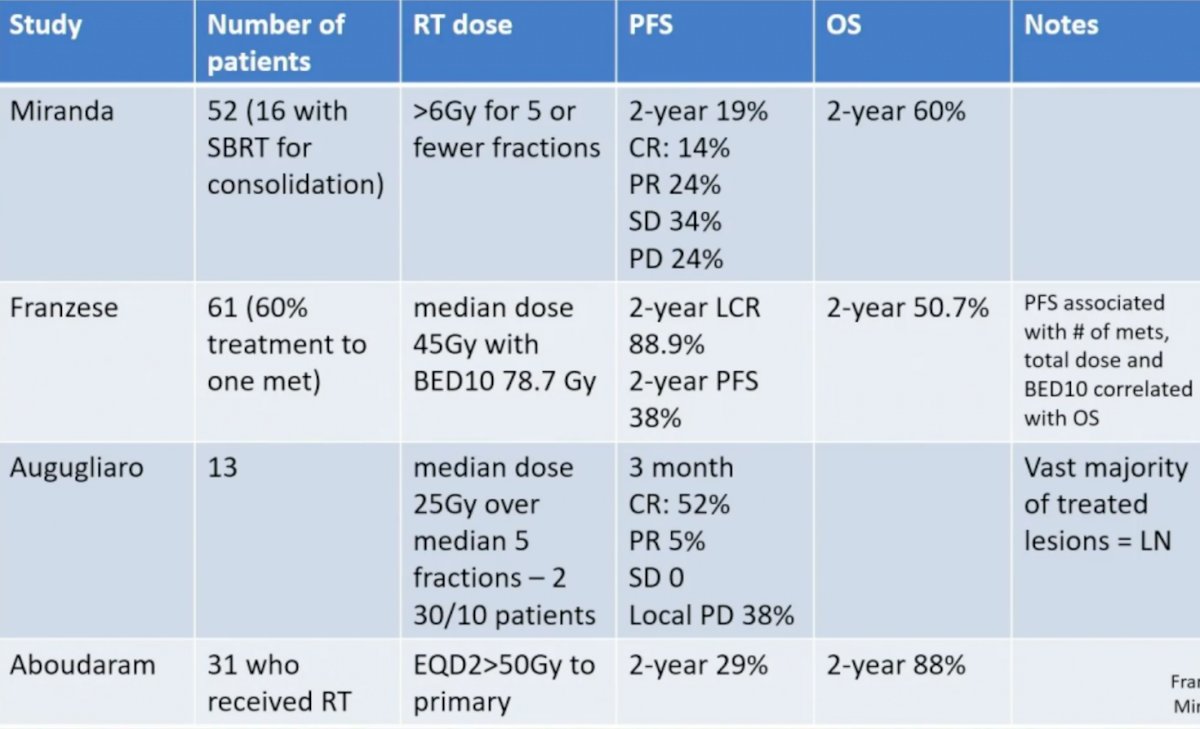