Dr. Michaelson began his presentation by noting that the standard treatment for men with very high-risk prostate cancer consists of high dose radiation therapy with 24-36 months of ADT. While designing this study over a decade ago, the authors noted that prior studies demonstrated that the risk of disease recurrence and relevant endpoints were improved with longer concurrent ADT use (24 months versus 4 months based on the RTOG 9202) and that addition of chemotherapy (docetaxel) improves MFS, although not OS (RTOG 0521).1 Dr. Michaelson explained that his group sought to evaluate whether earlier use of systemic therapeutic options with demonstrated benefit in the metastatic disease space could improve outcomes in clinically localized, high-risk patients. As such, RTOG 1115 explored the addition of novel hormonal therapy with orteronel (TAK-700) to standard XRT + ADT (24 months). Similar to abiraterone, orteronel is an androgen synthesis inhibitor, although not FDA approved at this point. The authors hypothesized that addition of novel hormonal therapy to standard treatment may improve overall survival and other outcomes in men treated for localized, high risk prostate cancer.

The target sample size for this study was 900 patients. The primary endpoint was overall survival. The study had 85% power, at an alpha type 1 error rate of 5%, to detect a 33% reduction in failure hazard upon maturity (following 239 events). Between May 2011 and September 2014, this trial enrolled 238 patients, with the trial accrual halted when orteronel development ceased. As such, the revised primary endpoint was a composite of biochemical failure (Phoenix criteria), local/regional/distant failure, or re-initiation of ADT. This modified protocol had 80% power, again at an alpha error of 5%, to detect a 45% reduction in biochemical failure (at 70 events). Due to expected time to completion, NRG DMC recommended reporting the trial with current data (37 events).

Patients received an XRT boost in the form of IMRT or brachytherapy. All patients in both arms received a concurrent 1st generation non-steroidal anti-androgen (bicalutamide) until completion of XRT. Patients in the intervention arm received TAK-700 twice daily for 24 months. 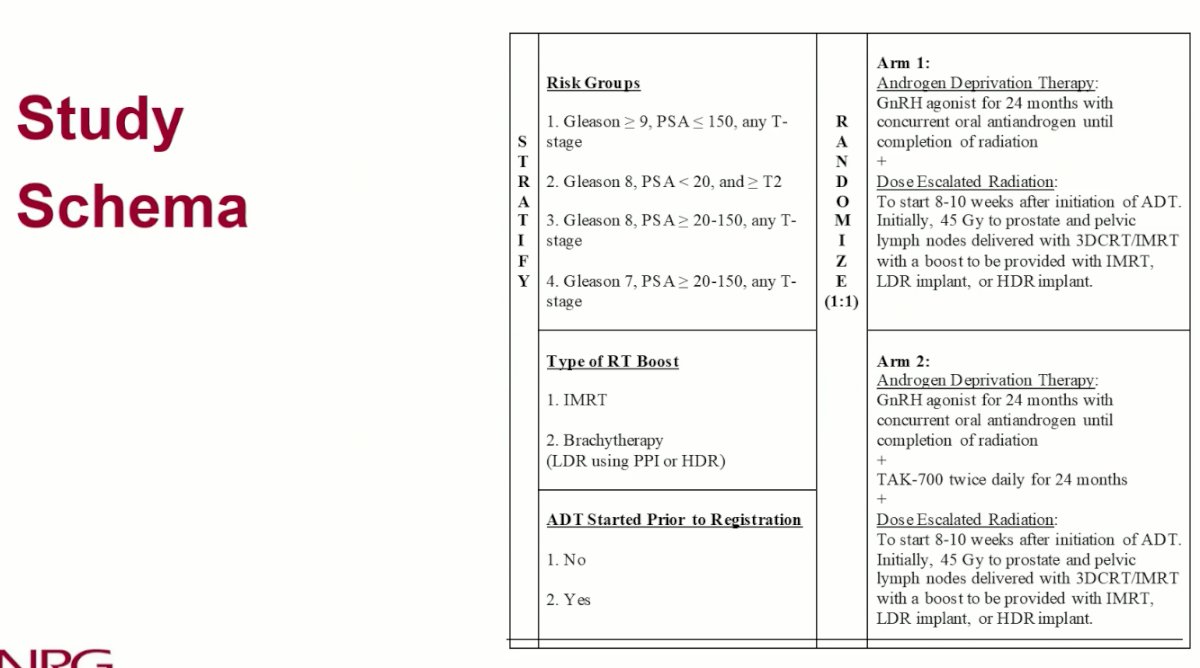 With regards to baseline patient demographics, it bears note that almost 60% of patients had Gleason score 9 disease at entry. 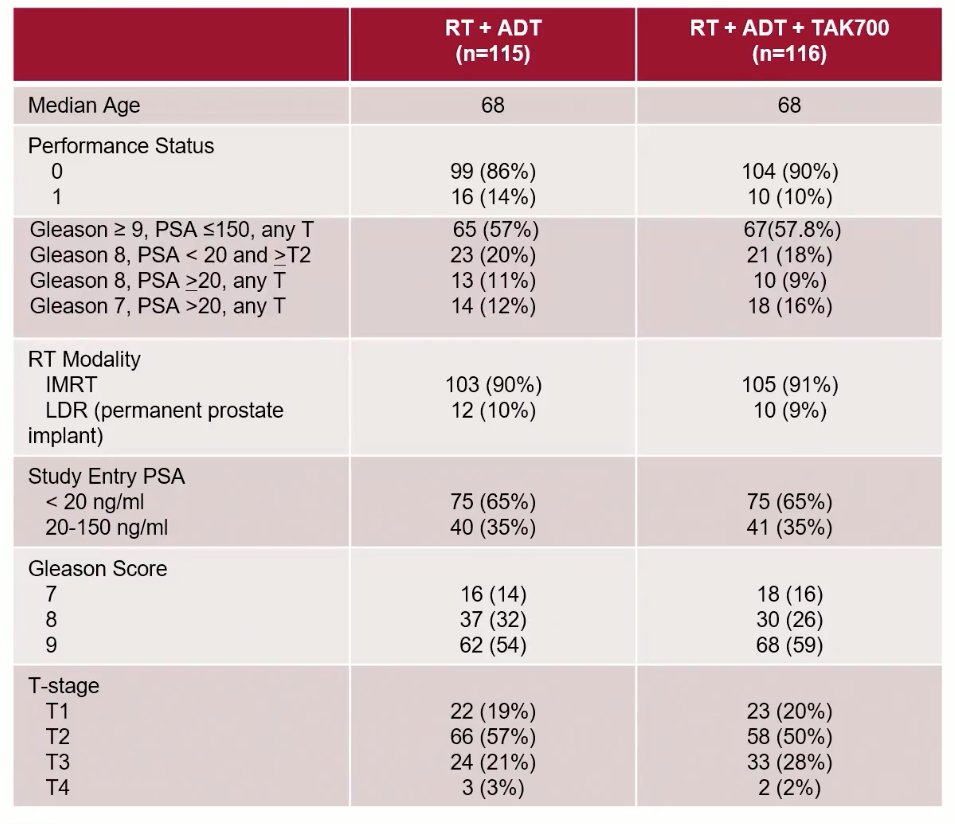 With respect to the primary endpoint of compositive biochemical failure, the authors noted no significant difference between the two arms (HR: 0.83, 95% CI: 0.47 – 1.48, log-rank p-value=0.56). Although this was a very high-risk cohort with the majority have Gleason 9 disease, the failure rates at 8 years were approximately 24% only in both arms. There appeared to be a possible trend towards delayed failure in the intervention arm, but as Dr. Michaelson noted, this was not clinically or statistically significant. 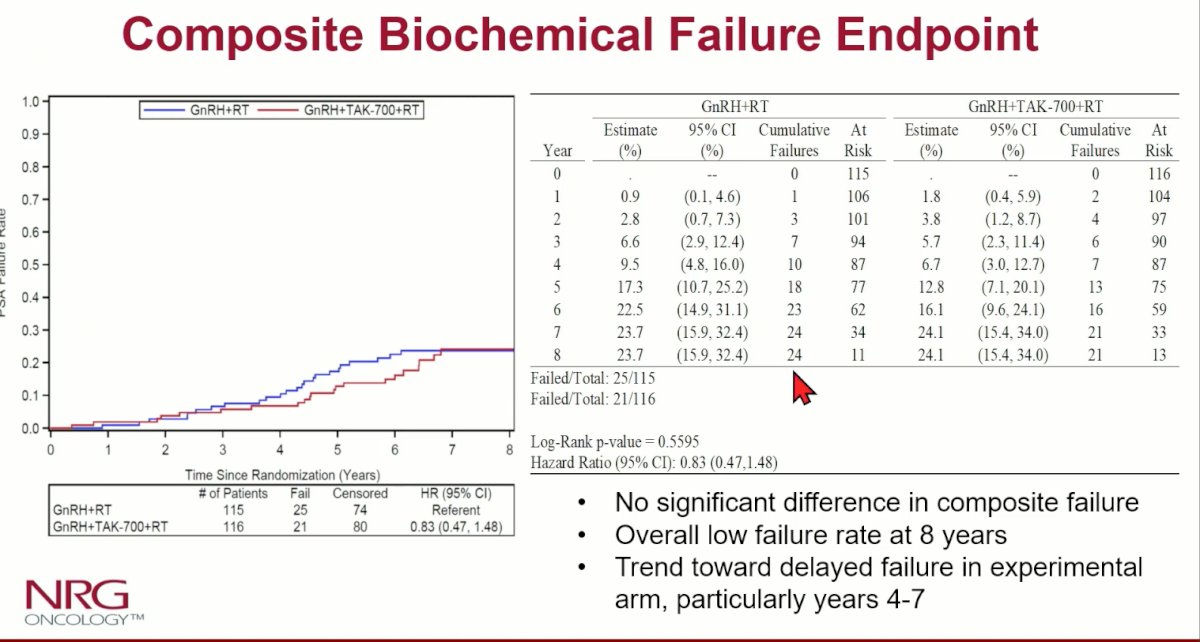 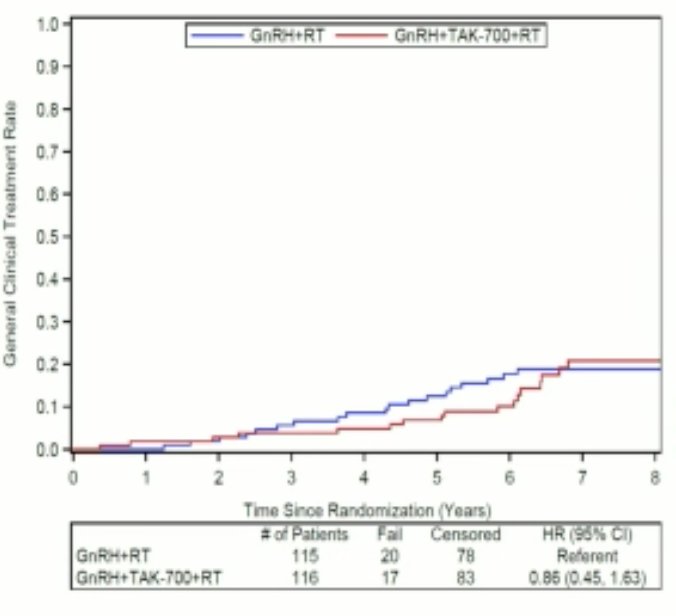 Next, Dr. Michaelson presented safety and toxicity data. Although serum lipid profile parameters, Hemoglobin A1c and fasting glucose, and body mass index all significantly worsened on follow-up, there was no statistically significant differences between the two arms. 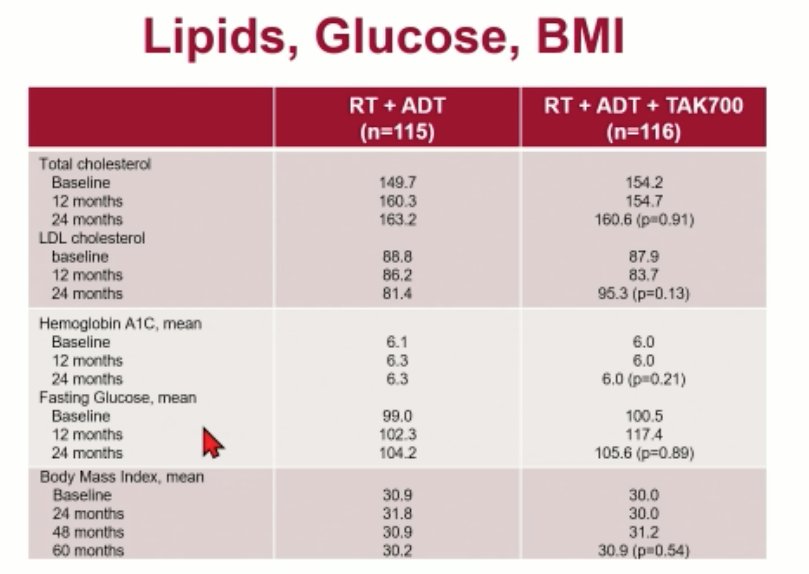 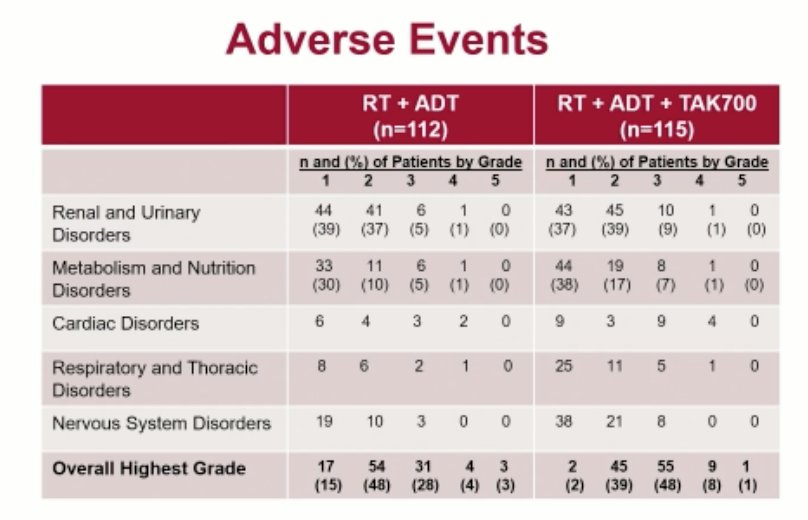