Dr. Murthy began his presentation noting that the diagnosis of positive node-only disease was relative common in countries with unscreened populations, such as India. In their practice, patients with N+M0 prostate cancer treated with radical intent undergo the following management plan: 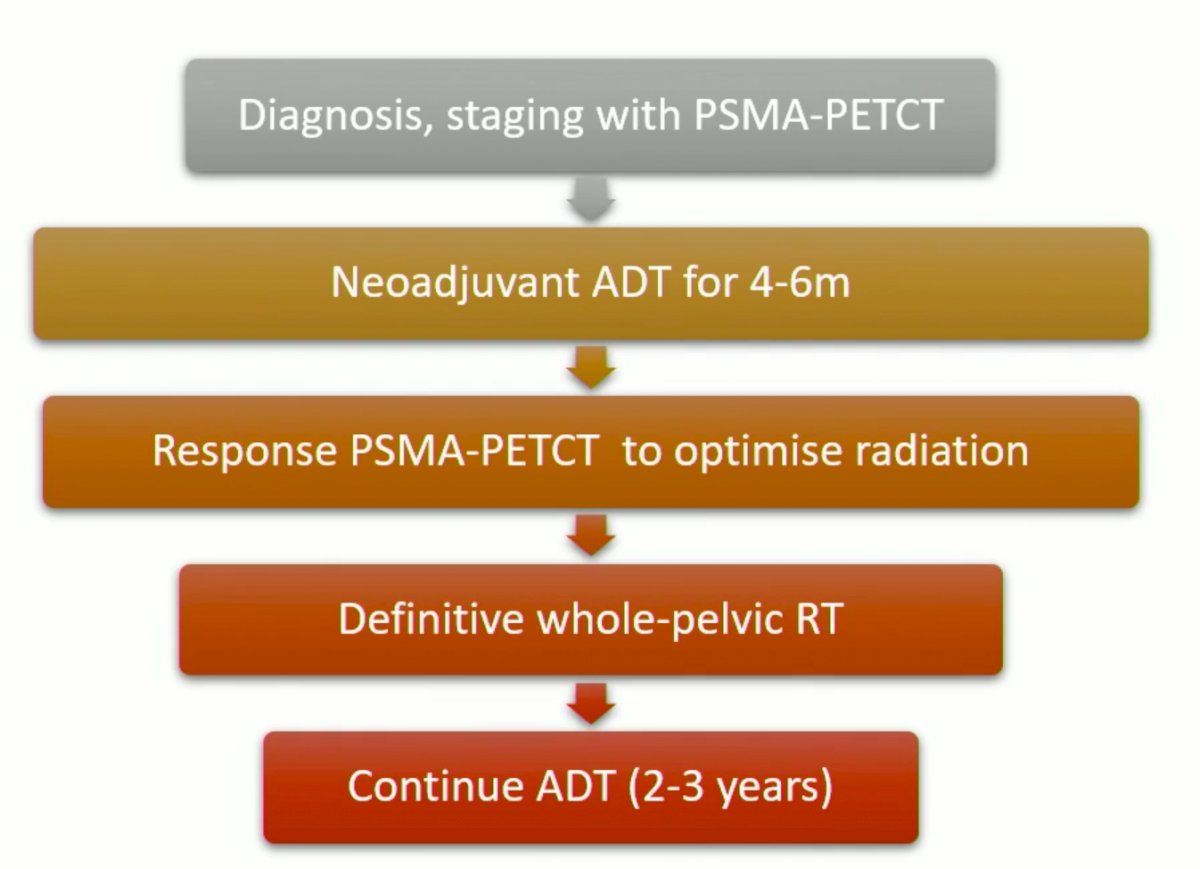 Over time, Dr. Murthy and his partners anecdotally noted that patients with node-positive disease on PSMA PET/CT would usually have partial and/or complete responses to a few months of ADT. 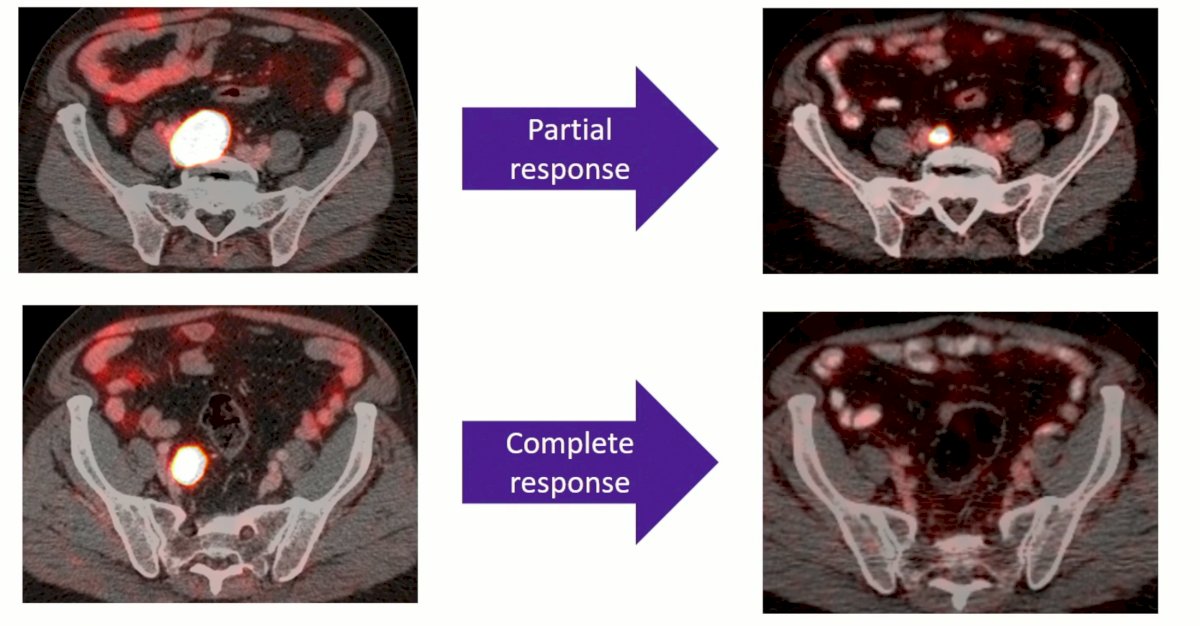 They however noted that response rates in the prostate gland were not as consistently favorable as those seen in the lymph nodes for the same patients. 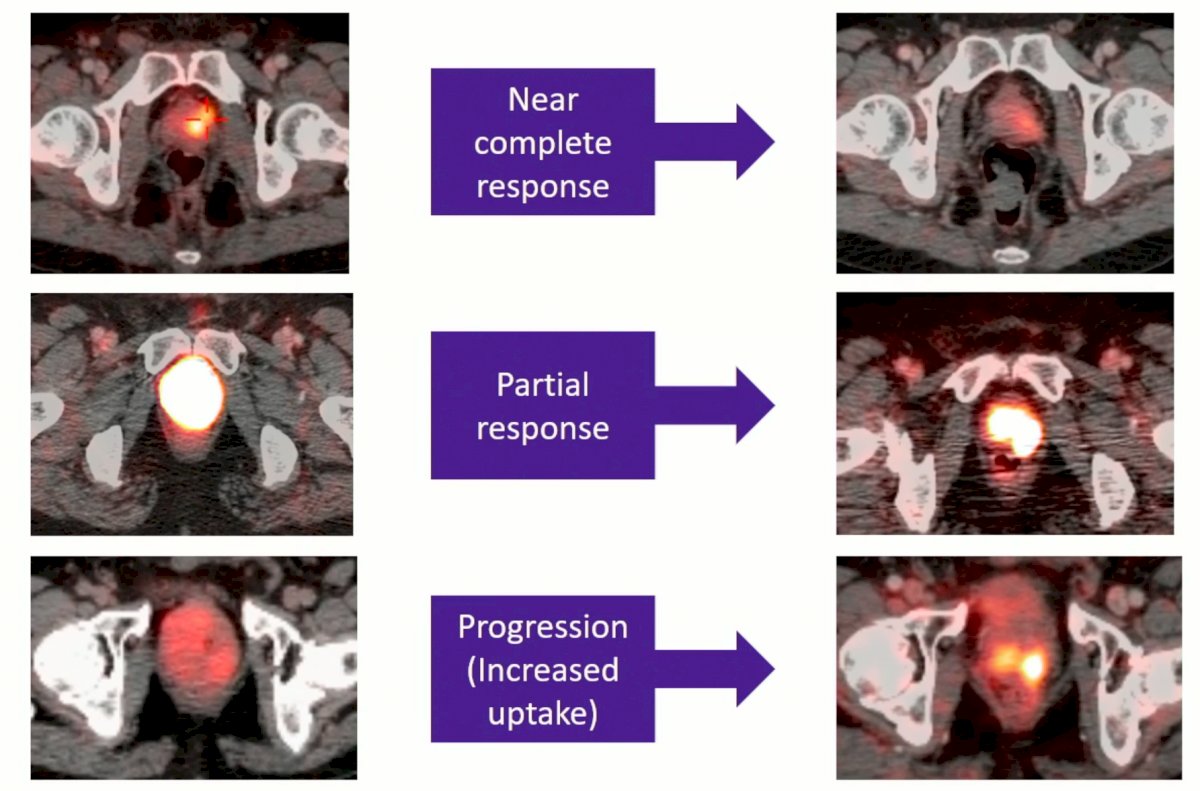 Following these observations, the authors conducted a study to answer the following questions:

In essence, does the response observed on repeat PSMA PET/CT act as a prognostic biomarker of future oncologic outcomes? To this end, the authors included patients with newly diagnosed N=M0 prostate cancer (pelvic nodes only), diagnosed via 68Ga PSMA PET/CT. These patients were planned for curative radiotherapy with ADT. Patients had paired 68Ga PSMA PET/CT images available before and after neoadjuvant ADT. All patients had a minimum of one year follow-up post radiotherapy. 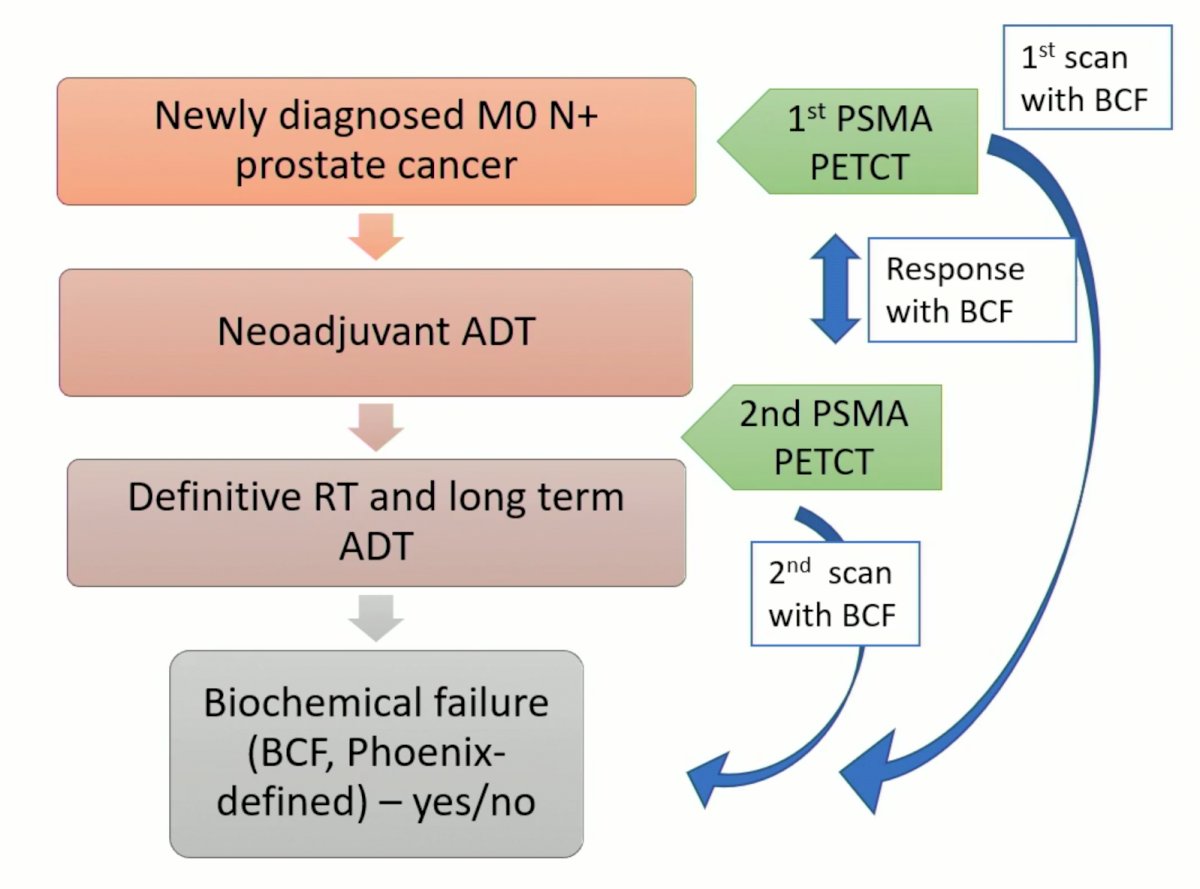 The authors evaluated the following PET imaging parameters in the initial and subsequent PET:

PSMA response was classified as follows:

This study included 92 eligible patients with paired PSMA PET/CTs pre- and post-neoadjuvant ADT. The median duration of neoadjuvant ADT was 6 months and that of total ADT was 24 months. Patients did not receive systemic treatment intensification. For radiotherapy, the patients received dose-escalated, image-guided intensity-modulated radiation therapy in the form of moderate hypofractionation or SBR. The median EQD2 was 80 Gy (IQR: 78 – 84 Gy) A boost to gross nodes was given to 25% of the patients.

The differences in pre- and post-ADT PSMA PET parameters were quantified in the prostate gland and nodes, with consistent superior objective responses noted in the lymph nodes:

Next, the authors addressed whether PSMA PET findings correlated with oncologic outcomes. With a median follow-up of 43 months, biochemical failure was noted in 21/92 patients, with a 4-year biochemical failure-free survival of 75%. Patients with stable/progressive disease on PSMA PET/CT were significantly more likely to experience biochemical failure after radical XRT + ADT. 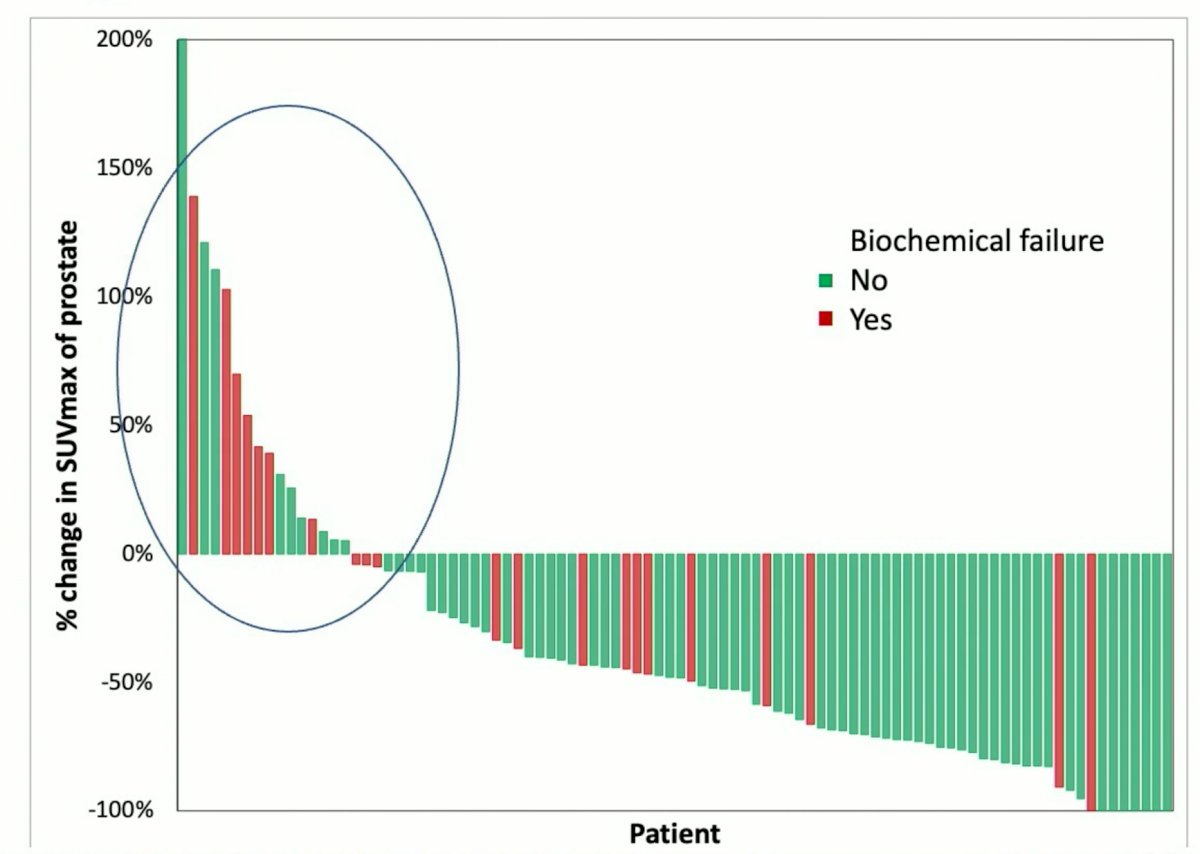 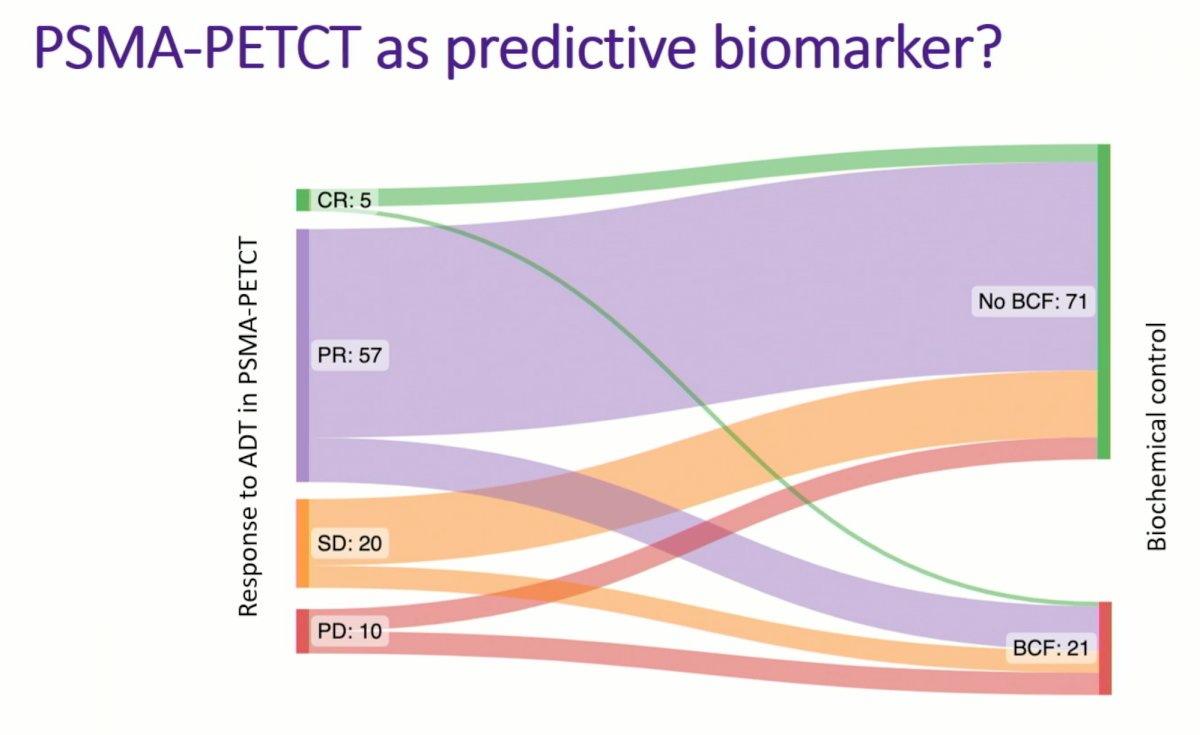 Furthermore, it appears that the results of the initial PSMA PET/CT are not sufficient to predict future risk of biochemical failure:

Based on these results, Dr. Murthy concluded as follows: