Dr. Tang began his presentation by providing the rationale for the study design. He highlighted data from the STOMP and ORIOLE trials that evaluated the role of MDT in patients with oligometastatic prostate cancer. In brief, the STOMP trial was a multicenter, randomized phase II trial that prospectively evaluated the effects of metastasis-directed therapy for patients with evidence of oligometastatic disease on choline PET/CT (up to three extracranial sites) who had received prior treatment with curative intent and had evidence of biochemical recurrence with testosterone >50 ng/ml (i.e. metachronous, oligometastatic hormone sensitive prostate cancer). Between 2012 and 2015, 62 patients were randomized 1:1 and metastasis-directed therapy was with either SBRT or metastatectomy. With a median follow up of 5.3 years, the five-year ADT-free survival was 8% in the surveillance arm compared to 34% for the MDT group (HR: 0.57, 95% CI: 0.38- 0 .84, log-rank p=0.06).1  The ORIOLE trial was a randomized phase II trial of 54 men with metachronous, oligometastatic mHSPC (up to three sites). Metastatic sites were diagnosed via 18F-DCFPyL PET/CT. Between 2016 and 2018, patients were randomized in a 2:1 fashion to receive SABR or observation. Treatment with SABR improved median progression-free survival (not reached vs 5.8 months; hazard ratio, 0.30; 95% CI, 0.11-0.81; p = 0.002). Recently published pooled data from the two trials (STOMP and ORIOLE) demonstrates that metastasis-directed therapy in these patients improves progression-free survival from 5.9 months (95% CI: 3.2 – 7.1) to 11.9 months (95% CI: 8.0 – 18.3; HR: 0.44, p < 0.001), without any significant improvements seen in radiographic progression-free survival, time to castration-resistant disease, or overall survival.3

Elaborating on the study rationale for including intermittent ADT, as opposed to continuous ADT, Dr. Tang noted that hormone therapy does have significant adverse effects and conversely, intermittent regimens may reduce such side effects. While the SWOG S9346 trial did demonstrate worse survival outcomes for intermittent ADT (as opposed to continuous ADT) in metastatic prostate cancer patients, and as such may have led to decreased adoption of intermittent ADT, Dr Tang did note that there were important limitations to this trial. Median PSA at diagnosis was notably high at 42 ng/ml, PSA did not nadir to <0.2 ng/ml after 7 months in 65% of patients, and during hormone therapy holidays, hormone therapy was resumed at a PSA >20 ng/ml. As such, Dr. Tang noted that he did not believe that such results can be universally translated to modern clinical practice and that these results should not lead to discontinuation of intermittent ADT regimens in the appropriate patient.

Given the benefit of MDT in the oligometastatic setting and the known benefit of early ADT addition, Dr. Tang and colleagues designed the EXTEND trial. This trial included patients with known diagnosis of prostate cancer and 5 or less metastatic sites. Patients had previously been on at least 2 months of prior hormone therapy (GnRH agonist/antagonist +/- 2nd generation agents). Untreated primaries were allowed, but patients had to be treated regardless of randomization. Patients underwent a stratified randomization (detailed below) in a 1:1 fashion to either combined therapy (MDT + 6 months of hormone therapy) or 6 months of hormone therapy alone. After 6 months, patients were given a hormone therapy break, after which hormone therapy was resumed for evidence of biochemical and/or radiographic progression.

The primary endpoint of progression-free survival demonstrated a significant benefit for MDT addition to 6 months of hormone therapy. After a median duration of follow-up of 22.1 months, median PFS was not reached in the MDT+ADT arm versus 15.8 months in the ADT alone arm (HR: 0.25; 95% CI: 0.12 – 0.55, stratified log-rank test p<0.001). 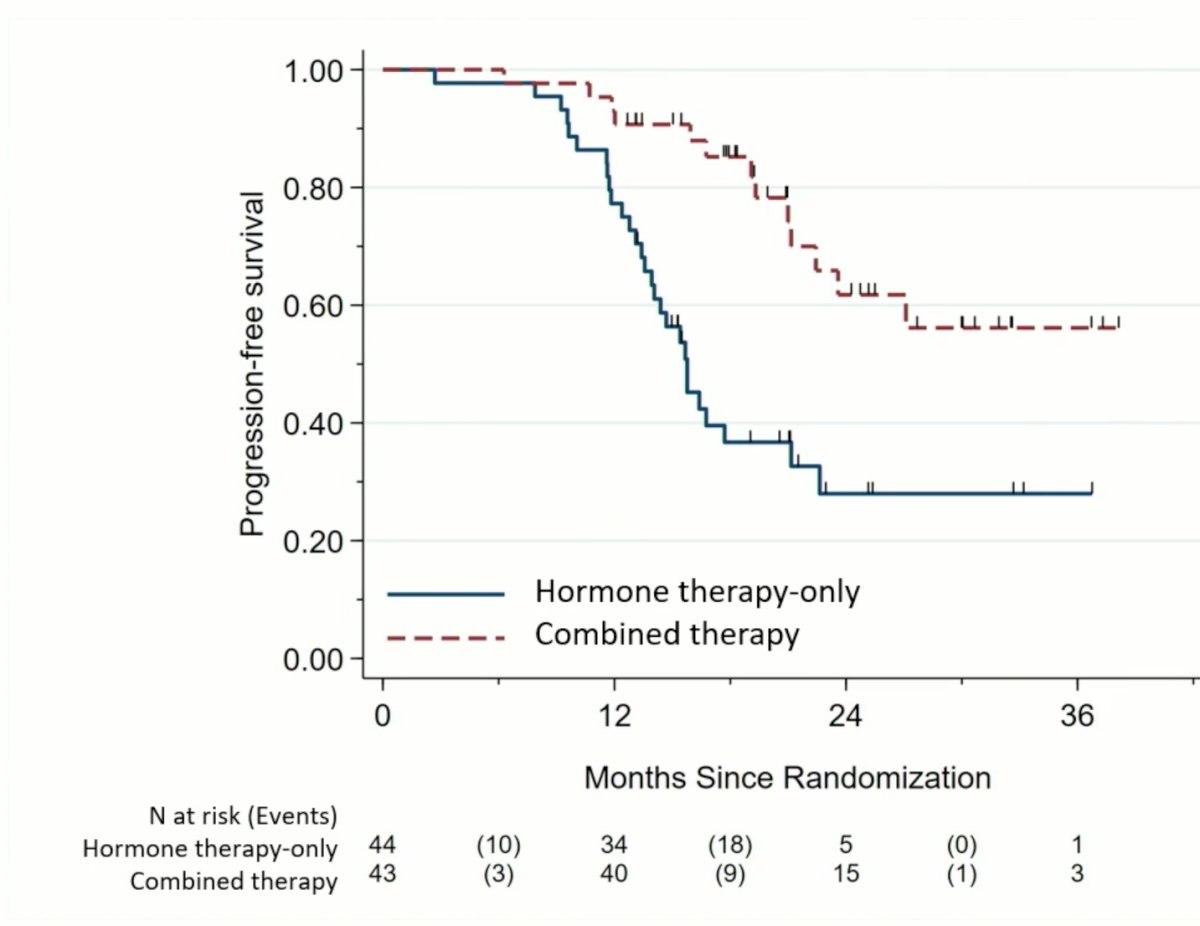 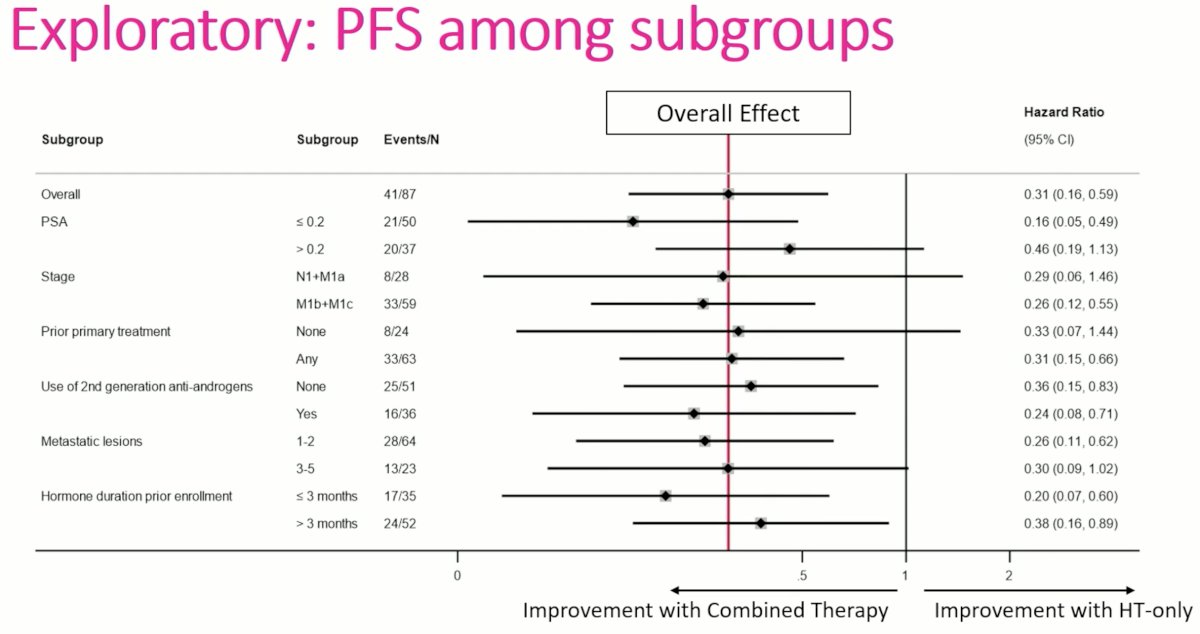 Eugonodal progression-free survival, defined as time from the demonstration of eugonadal testosterone levels (>150 ng/dL) to progression, was also significantly higher in the MDT + ADT arm (p=0.025).