(UroToday.com) The 2021 American Society for Radiation Oncology (ASTRO) Hybrid Annual Meeting’s included a session on biomarkers and salvage radiotherapy and discussion by Dr. Alan Dal Pra regarding the performance of a genomic classifier within a phase 3 randomized trial of dose escalated salvage radiotherapy after radical prostatectomy.

Genomic classifiers can independently prognosticate prostate cancer outcomes and may help individualize treatment intervention. Pre-salvage PSA is an important prognostic and a predictive factor for salvage radiotherapy and androgen deprivation therapy post-prostatectomy. In the study presented at ASTRO 2021, Dr. Dal Pra and colleagues assessed the role of the genomic classifier in patients treated within a contemporary phase 3 trial.

The SAKK 09/10 trial (NCT01272050) is a multicenter, randomized phase 3 trial performed in 24 centers in Switzerland, Germany, and Belgium. Patients with biochemical progression (PSA >0.1 to 2 ng/mL at randomization) were randomized to 64 Gy versus 70 Gy to the prostate bed; no ADT or pelvic nodal radiotherapy was used. The results of this study were recently published in European Urology [1] and there was no difference in failure from biochemical progression between the two groups after six years of follow-up: 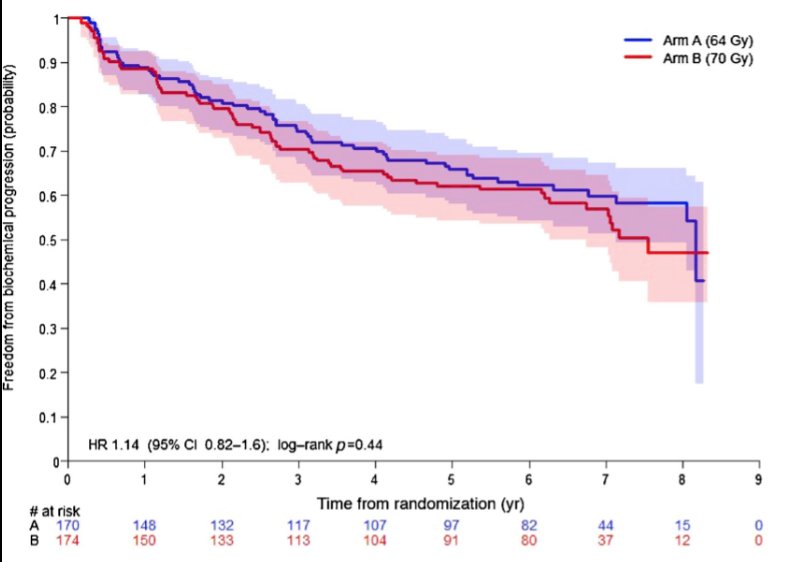 There was a pre-specified statistical plan (prior to the trial primary endpoint analysis) to assess the impact of the genomic classifier on clinical outcomes. Radical prostatectomy samples were centrally reviewed for the highest-grade tumor, and after passing quality control, samples were run on the Decipher assay. Additionally, the study followed the PRoBE and REMARK criteria. The primary endpoint for the study was time to freedom from biochemical progression, secondary endpoints included clinical progression free survival and receipt of ADT, and exploratory endpoints included rapid biochemical progression (<= 18 months), distant metastases, and metastasis-free survival. In this exploratory sub-analysis, the primary endpoint was failure from biochemical progression to PSA at randomization (<= 0.5 (early salvage radiotherapy) versus >0.5 (late salvage radiotherapy), a trial stratification variable). Cox multivariable analysis adjusting for age, T-category, Gleason score, persistent PSA after radical prostatectomy, and randomization arm were performed.

Among contemporary samples, there was a high lab quality control passing rate of >97%, which included 226 unique patients that subsequently underwent a Decipher test (n = 111 in Arm A – 64 Gy; n = 115 in Arm B – 70 Gy). Overall, genomic classifier risks were comparable between the two arms.

In this study, cohort characteristics were representative of the full SAKK 09/10 cohort, with comparable stratification variables in Arm A and Arm B. For genomic classifier high versus low/intermediate, the hazard ratios are as follows:

For genomic classifier high- versus low/intermediate disease in the salvage radiotherapy subgroup, hazard ratios were:

Additionally, the prognostic performance of Decipher score within pre-salvage radiotherapy PSA subgroups showed that for freedom from biochemical progression for a PSA at randomization > 0.5 ng/mL had a hazard ratio of 1.23 (95% CI 1.07-1.41).