(UroToday.com) In an interactive session of the American Society for Radiation Oncology (ASTRO) Annual Congress focussing on the management of patients with Intermediate Risk Prostate Cancer from initial consultation through treatment to follow-up, Dr. Kollmeier presented on the role of hypofractionation.

Dr. Kollmeier began by highlighting epidemiologic trends in prostate radiotherapy. Over the past 10 years, there has been an increasing trend towards hypofractionated radiotherapy regimes, led in large part by the increasing use of ultra hypofractionated stereotactic body radiotherapy (SBRT) regimes. Between 2010 and 2015, the use of SBRT increased from 3.1% to 7.7%, driven predominately by its use in patients with low and intermediate risk disease. 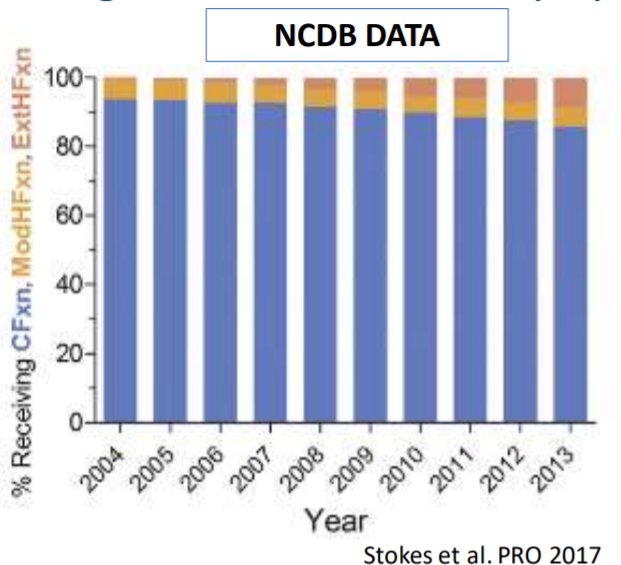 The rationale for hypofractionation is multi-layered. First given the low alpha/beta ratio of prostate cancer, hypofractionation has the potential for improved tumor control. Second, there is the potential for decreased acute toxicity. Additionally, there is better convenience for the patient and lower cost due to fewer treatment fractions. However, these advances have really been facilitated by technical advances including image guidance.

Dr. Kollmeier then summarized a number of trials that, in aggregate demonstrate the hypofractionated radiotherapy is non-inferior to conventional fractionation for patients with low, intermediate, and high-risk prostate cancer. While a variety of hypofractionated regimes were employed, results were relatively consistent and support the widespread use of this approach.

Further, most studies demonstrate similar or modestly increased GI and GU toxicity for patients treated with moderate hypofractionation. However, there is also data from PROFIT and CHHiP suggesting the potential for decreased toxicity in terms of late grade 2 or greater GI toxicity and sexual bother, respectively.

Summarizing data available to date, Dr. Kollmeier concluded that moderate hypofractionation has non-inferior efficacy compared to conventionally fractionated regimes with a modest increase in GI and GU toxicity, though this may be mitigated by differences in technique.

In terms of preparation, she emphasized the importance of appropriate patient selection, the use of fiducial markers with or without rectal spacers, and the use of an empty rectum and full bladder for simulation. Ideally, she suggested that MRI simulation is preferred. The clinical target volume (CTV) should be defined based on the prostate and seminal vesicles while the planning target volume (PTV) includes a 5mm isometric margin (3mm posteriorly) in addition to the CTV. Further, cone-beam CT should be used pre-treatment with the use of intrafraction motion monitoring.

In terms of ultra-hypofractionation, or SBRT, there are a number of prospective single-institution studies utilizing treatment regimes of 32 to 40 Gy in 5 fractions which have reported results with follow-up in the 5 to 7-year range. For the most part, these studies have included patients with low and intermediate risk disease and with prostate volumes <100cc and low baseline GU symptoms. In addition to these cohorts, two randomized controlled trials have been performed. The first of these, the HYPO-RT-PC trial randomized 1200 patients with intermediate or high risk disease to a conventional regime of 78 Gy in 39 fractions or 42.7 Gy in 5 fractions. Over a median follow-up of 5 years, there was no difference in biochemical or clinical failure. The PACE-B trial is comparing conventional or moderately hypofractionated radiotherapy (78 Gy in 39 fractions or 62 Gy in 20 fractions) with SBRT (36.25 Gy in 5 fractions) in patients with predominately intermediate risk disease. Data available to date show no differences between the two arms for either bowel or GU toxicity in the short term.

Phase I data from MSKCC show that a dose less than 40 Gy is associated with a higher rate of positive post-treatment biopsy at 2-years, or among patients with unfavourable intermediate risk disease. However, lower doses have lower rates of both acute and late grade 2 or greater GU toxicity as well as acute grade 2 or greater GI toxicity.

Summarizing the data on ultra-hypofractionation, she emphasized that this approach is likely non-inferior to conventional or moderately hypofractionated regimes, among the cohort of patients examined with low to intermediate risk disease who do not receive ADT. There is a modest increase in acute GI and GU toxicity though comparable late toxicity. However, there is improved convenience and cost.

In terms of the management of toxicity, she emphasized the importance of both recognizing and reacting to these events. Recognition relies of the collection of data, including patient-reported outcomes at baseline and regularly during follow-up as well as physician-reported toxicity. In terms of reacting to these events, she highlighted the value of dietary restriction, alpha-blockers, NSAIDs, antispasmodics, and simethicone for patients undergoing radiotherapy.