Dr. Tree began with a discussion of the historic standard of care of 78 Gy in 39 fractions. This treatment approach requires coming to the hospital every day for 7.5 weeks, which she noted is a large burden for even motivated patients.

The largest trial, she emphasized, assessing moderate hypofractionation was the CHHiP trial. 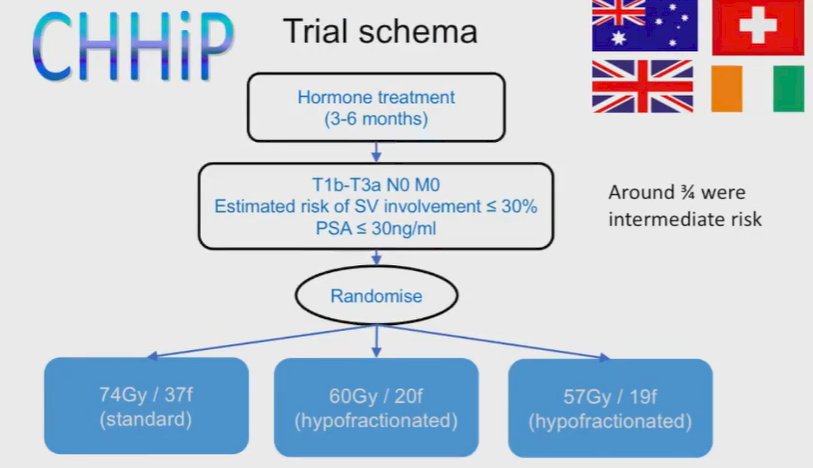 This multi-national study demonstrated comparable 5-year biochemical recurrence for patients who received a moderately hypofractionated regime. Further, short-term side effects, there was an early peak in bowel and bladder symptoms, though these were comparable by the end of the acute toxicity window. Considering longer-term effects, there was no difference in either bowel or bladder toxicity. A subset analysis among older men, the conventional fractionated regime appeared to potentially have worse outcomes than either moderately hypofractionated regime.

She then briefly discussed three further trials, beginning with the PROFIT trial which did not include use of ADT, finding no difference in biochemical control between patients treated with a standard course (39 fractions) or “short” course (20 fractions). Further, the PROFIT trial demonstrated no difference in GU toxicity. While GI toxicity was somewhat worse in the hypofractionated arm in the short term, long-term toxicity was actually decreased. RTOG 0415 and HYPRO again showed no difference in biochemical control between conventional and moderately hypofractionated regimes.

Summarizing the data on moderate hypofractionation, Dr. Tree emphasized that four randomized controlled trials have shown than hypofractionation with ~3 Gy per fraction provides equivalent biochemical control and long-term toxicity as conventional 2 Gy per fraction schedules. There is somewhat more acute bowel toxicity but this settles with time. The question then becomes whether even further hypofractionation is feasible. The HYPO-RT-PC trial provides a comparison of a conventionally fractionated regime (78 Gy in 39 fractions) with an ultrahypofractionated regime (42.7 Gy in 7 fractions) using 3D conformal radiotherapy. Published in Lancet Oncology, these data show comparable 5-year biochemical recurrence free survival. The authors found that patient-reported GI toxicity was temporarily worse during treatment but that this resolved and long-term rates were equivalent. A similar pattern was observed for GU toxicity, with a flare of symptoms between 1-2 years following therapy, compared to a conventional regime.

Stereotactic body radiotherapy is a further advance, representing a high dose per fraction (typically up to 10 Gy) with few fractions employed and precise delivery including image guidance utilizing advanced physics techniques to deliver a high tumor dose with sparing of the surrounding tissue. Dr. Tree highlighted large consortia based data sets including 6116 patients followed for a median of 39 months. 7-year biochemical recurrence free survival was 93.7% in this meta-analysis. Dr. Tree noted however that most patients treated on these studies had lower or favourable intermediate risk disease. The PACE B trial is a randomized comparison of conventional/moderate hypofractionation with SBRT for men with localized prostate cancer.

This trial has shown that short term toxicity results have shown no differences between the two arms for either bowel or GU toxicity. Out to two years, there is no difference in grade 2+ GI toxicity. However, at two years, GU toxicity was somewhat higher in the SBRT arm when measured using the CTCAE grading schema: 11.8% compared to 5.8% in the conventional fractionation arm. Biochemical outcomes are forthcoming and expected in 2023.

In conclusion, she highlighted that moderate hypofractionation is now standard of care in localized prostate cancer. While SBRT looks promising in patients with low and favourable intermediate risk prostate cancer, level 1 evidence is awaited.