(UroToday.com) In the Latin America ASTRO session of the American Society for Radiation Oncology (ASTRO) Annual Congress, Dr. Berlin presented on controversies in the management of patients with Muscle-invasive bladder cancer (MIBC). He began by highlighting that this is an exciting topic, over the last 10 to 15 years. Previously, he highlighted a self-perpetuating issue of limited research funding leading to a poor understanding of disease biology, an absence of novel therapeutic approaches, and a lack of public awareness and engagement which would in turn feed limited research funding. However, more recently, there was been substantial progress in this disease space ranging from neoadjuvant therapy (including single-agent immune checkpoint inhibitors, immune checkpoint inhibitor combinations, and combination chemo-immunotherapy), adjuvant systemic therapy, and advances in bladder sparing treatment approaches.

In the context of muscle invasive bladder cancer, he highlighted that whether treatment is undertaken with radical cystectomy or an alternative bladder preserving approach, the objectives are to cure the disease and optimize overall survival while achieving the best possible quality of life. 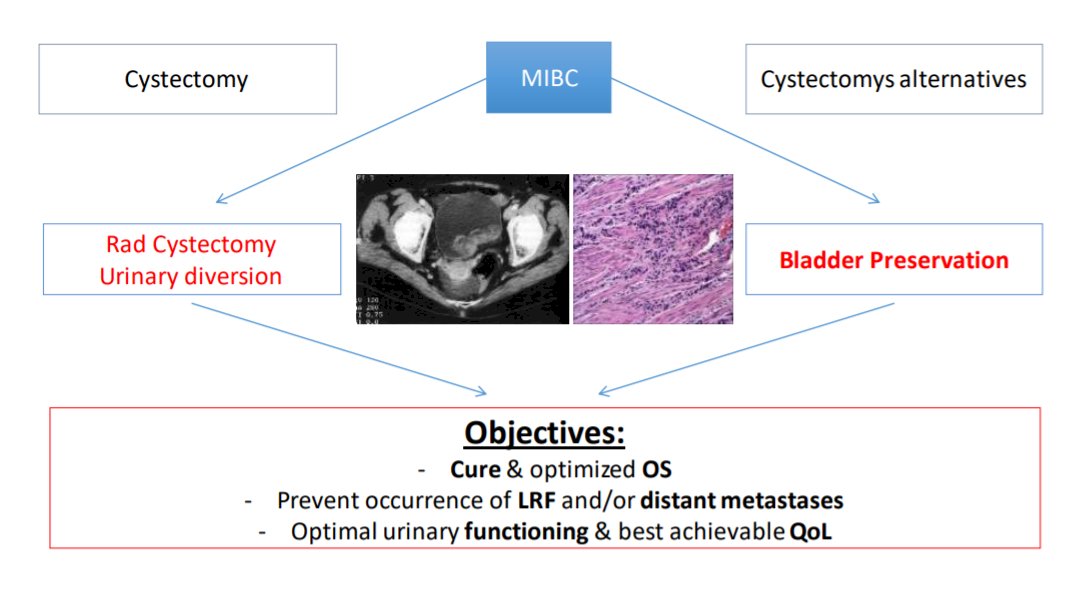 In considering a bladder sparing approach, he emphasized the importance of maximal transurethral resection of the bladder tumor (TURBT), radiotherapy, and concurrent chemotherapy with considerations for the use of neoadjuvant chemotherapy and early salvage cystectomy to turn trimodal therapy into tetra- or penta-modal therapy.

Citing data from a review of prospective series, he suggested that cystectomy and selective bladder preservation may have similar results, though there are notable issues with selection biases, differences between clinical and pathological staging, the intention to treat, and heterogeneity in treatment administered.

The SPARE trial sought to address this question in a randomized fashion, taking patients following TURBT and treating all with chemotherapy with selective use of bladder preservation compared to radical cystectomy. 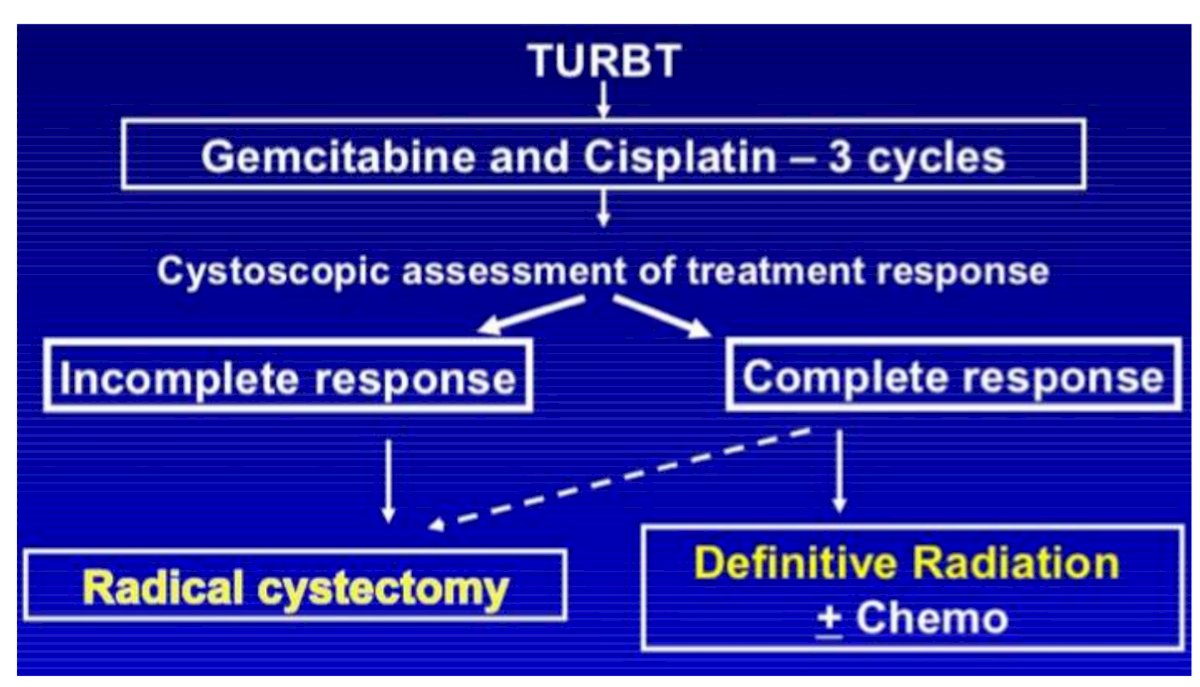 Unfortunately, this trial failed in part due to multidisciplinary complexity, administrative bureaucracy, an unbalanced patient choice among those patients willing to participate, and resulting accrual issues.

Considering monotherapy approaches, which would not be recommended regardless of the backbone, MIBC is often a systemic disease and systemic relapse is associated with very high rates of death from disease. Further, these patients are highly comorbid.

Dr. Berlin then emphasized the importance of identifying those patients who are likely to fail systemically so that we may intensify systemic treatment. While a significant amount of work has been undertaken to identify prognostic markers in bladder cancer, clinical utility depends on whether these are actionable or targetable. One of the more widely used approaches in bladder cancer is that of molecular subtyping. This has demonstrated some ability to predict response to chemotherapy. However, Dr. Berlin highlighted that DNA repair pathway alterations have demonstrated important predictive features, particularly in terms of response to radiotherapy.

He then transitioned to discuss trimodal therapy in more detail, beginning with a description of the results from large series. The Mass General Hospital (MGH) experience encompasses 348 patients with cT2-4a disease treated with a variety of protocols between 1986 and 2006 and followed for a median of 7.7 years. Based on data from 2013, overall and disease specific survival rates from this series compare relatively favourably to comparable radical cystectomy cohorts.

He then moved to discuss the Princess Margaret Hospital experience. Citing data from the Journal of Clinical Oncology publication in 2017, he emphasized that this cohort demonstrates essentially comparable results between the two approaches, based on a propensity-score matched, non-randomized comparison.

He further emphasized the importance of maximal TURBT to the outcomes of patients treated with trimodal therapy. A visibly complete TURBT was associated with improved compete response rates, overall survival, disease specific survival, and rates of salvage cystectomy.

Moving on, he discussed approaches to the use of concurrent systemic therapy, emphasizing changes over the years and between cohorts. Cisplatin, paclitaxel, 5-FU, mitomycin C, and gemcitabine have all been used and reported. However, he suggested that moving forward, the further may be a combination chemo-immunotherapy regime. The SWOG/NRG 1806 trial is a randomized comparison of concurrent chemoradiotherapy with or without atezolizumab in patients with cT2-4N0M0 MIBC with the primary endpoint of bladder-intact event-free survival.

Dr. Berlin then discussed questions of patient selection. He emphasized that the best candidates for trimodal therapy have unifocal disease with cT2 or early cT3 (<6cm) without evidence of hydronephrosis. Patients should have conventional urothelial histology, have undergone a maximal TURBT, not have evidence of extensive carcinoma in situ, and have good renal function to allow appropriate chemotherapy.

While many patients may be able to save their bladders with this approach, Dr. Berlin emphasized the importance of modern radiotherapy regimes to contemplate future cystectomy. Thus, the use of high conformality, image-guidance, and a reduced bowel dose are critical for these patients. One way to improve radiotherapy delivery is with the use of tumor fiducials using Lipiodol. This reduces tumor target misses, defines patient-specific tumor margins, and allows a reduction in radiotherapy administered to surrounding tissues.

Highlighting data from the RTOG trial experience, he emphasized that rates of late serious (grade 3+) toxicity are low and thus, radiotherapy toxicity should not be a factor in the decision of surgery versus trimodal therapy. Considering quality of life, he emphasize that the baseline bladder function is critical and that attempted bladder preservation is only worthwhile where it preserves bladder function that is acceptable to the patient. He further highlighted that quality of life data comparing surgery and trimodal therapy in patients with MIBC are limited and fraught with biases.

One of the concerns initially raised with trimodal therapy was that salvage cystectomy, when required, would be associated with significantly higher toxicity. While the evidentiary base is relatively poor (comprising small series from tertiary centers), the available data suggest that complication rates are similar for patients undergoing upfront cystectomy or salvage cystectomy following trimodal therapy.

He then provided further context on the Toronto experience at the University Health Network with the multi-disciplinary bladder cancer clinic. In existence since 2008, patients are seen by a team comprising urologists, radiation oncologists, medical oncologists, clinical coordinators, research coordinators, residents, fellows, and students. In the first four years, 248 new consults were seen. Among these, 79% had additional evaluation including 42% who underwent restaging and 34% who had a change in the treatment recommendation. Of patients seen, 30% underwent cystectomy and 32% underwent trimodal therapy (of whom 70% were cystectomy candidates).

He closed by emphasizing that, while radical cystectomy is the historical gold standard, trimodal therapy offers excellent local control and bladder preservation for many patients with low toxicity. Moving forward, there is a need to identify optimal combination approaches of systemic therapy and biomarkers for personalized care.