(UroToday.com) In conjunction with the Scientific Congress held as part of the American Society of Clinical Oncology’s (ASCO) Annual Meeting in May 2020, an Educational Symposium was convened on August 8 to 10th. In a session entitled “Optimizing Cure for High-Risk Clinically Localized Prostate Cancer”, Dr. Felix Feng from the University of California San Francisco’s Helen Diller Family Comprehensive Cancer Center presented a plenary talk discussing biomarkers to guide primary and systemic therapy for patients with high-risk localized prostate cancer. He sought to cover three main topics: the role of biomarkers in treatment naïve patients, the role of biomarkers following prostatectomy, and the role of germline testing.

Dr. Feng began by highlighting that the role of biomarkers to guide treatment selection in patients with high-risk prostate cancer is a field of ongoing change. As recently as 2019, the National Comprehensive Cancer Network (NCCN) guidelines did not recommend biomarkers in the initial stratification of patients with high-risk disease. However, the most recent 2020 guidelines now advocate for consideration of the use of molecular assays such as Decipher® or Prolaris® in men with high-risk disease and life expectancy of at least 10 years. In addition, there are two more biomarkers (Oncotype Dx® and ProMark®) which may be considered, according to NCCN guidelines in men with low or favorable intermediate-risk disease, and are covered by the Molecular Diagnostics Services Program of Medicare.

Prolaris is a test measuring RNA expression of 31 cell cycle progression genes. It has been validated as a predictor of biochemical recurrence and metastatic progression. However, more recent data support the prognostic role of Prolaris in predicting the risk of metastasis in patients with intermediate or high-risk localized prostate cancer. However, the aforementioned data are limited due to a retrospective approach.

Thus far, Decipher is the most well-studied biomarker assay in this patient population. Again, this is an RNA based assay with scoring based on the expression of 22 genes. Studies in large cohorts of patients have demonstrated that the addition of the Decipher assay to standard clinicopathologic features improves the estimation of the risk of distant metastasis, compared to the use of traditional risk stratification based on NCCN risk groups using standard criteria. Further, even after accounting for standard clinicopathologic data, Decipher is an independent predictor of the risk of metastasis among patients with high-risk prostate cancer who undergo treatment with surgery or radiotherapy.

To address this, the PREDICT-RT trial (NRG GU-009) was designed as a large, prospective, biomarker-driven phase III trial among patients with high-risk disease.

Dr. Feng then moved from discussing the role of biomarkers in risk prediction among newly diagnosed, treatment-naïve patients to their role in proving the assessment of disease progression following radical prostatectomy. NCCN guidelines highlight that the Decipher molecular assay is recommended to inform adjuvant treatment among patients with adverse features at the time of radical prostatectomy. Supporting these guidelines are a number of retrospective studies as well as a large meta-analysis of 975 patients which demonstrated that the Decipher score was an independent predictor of metastatic progression following radical prostatectomy, among nearly all subgroups of patients stratified according to clinicopathologic, demographic, and treatment subgroups. 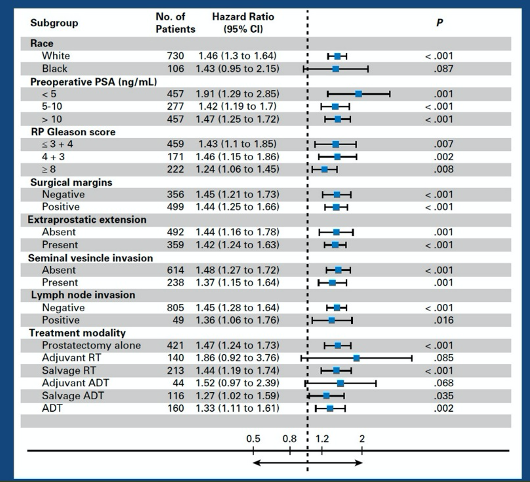 More recently, Decipher has been examined as a potential predictive biomarker. Work from Den and colleagues showed that while metastasis rates were similar for patients treated with adjuvant or salvage radiotherapy among those with a low Decipher score, there was a significant benefit to the adjuvant approach in those with a high Decipher score.

Further, among patients in the RTOG 9601 trial, a recent study assessed the prognostic value of Decipher. Interestingly, the benefit of the addition of anti-androgen therapy to post-operative radiotherapy appeared to be restricted to patients with intermediate to high Decipher scores, suggesting that Decipher may have predictive as well as prognostic features.

On the basis of these data, there are a number of trials incorporating Decipher to select patients at high risk for adjuvant therapy following radical prostatectomy.

While each of the aforementioned biomarker tests have relied upon somatic analysis of prostate cancer tissue, the most recent NCCN guidelines now recommend germline genetic testing for all patients with high-risk disease. This testing is aimed at identifying germline variants in a number of susceptibility genes including BRCA1, BRCA2, ATM, PALB2, MLH1, MSH2, MSH6, and PMS2. BRCA2 is among the better evaluated of these genes. Relatively small, retrospective studies have demonstrated worse metastasis-free survival and prostate cancer-specific survival following local therapy among patients with BRCA2.

However, the question of whether BRCA status should influence treatment selection remains an active area of research.