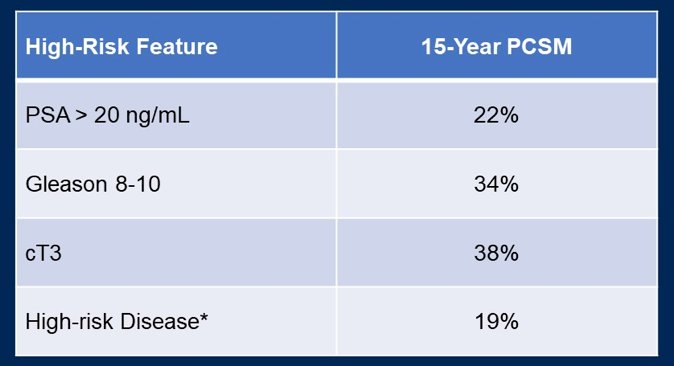 Currently, there are several paradigms of treatment for high-risk prostate cancer: 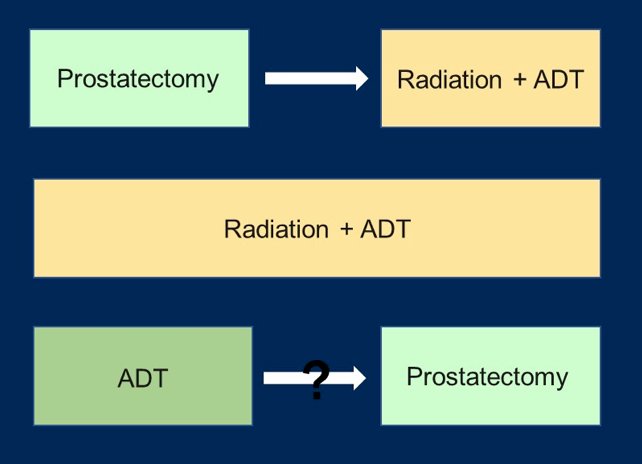 However, there is still some question as to the utility of neoadjuvant treatment for these high-risk patients. Interestingly, neoadjuvant treatment is standard of care for breast, rectal, bladder, and other cancers given the improved long-term survival. Neoadjuvant therapy may down-stage local disease, which may facilitate surgical resection and potentially reduce or delay post-surgery treatment. Historical neoadjuvant trials investigated LHRH agonists +/- first generation anti-androgens, but with the majority of patients having low-risk disease. These trials did not systematically evaluate pathologic response and had limited long-term follow-up. More contemporary neoadjuvant trials are investigating more potent androgen targeting agents (abiraterone acetate, enzalutamide, apalutamide), the majority of patients have high-risk disease, there is systematic central pathology review to evaluate response, and long-term follow-up is ongoing.

The optimal response metric in the neoadjuvant setting remains to be fully elucidated, specifically whether we should be conducting short versus long term trials or phase 2 versus phase 3 trials. There may be several potential endpoints in neoadjuvant trials based on the phase they are being conducted:

Dr. Taplin highlighted that there have been several series of randomized phase 2 trials in the neoadjuvant setting, testing the utility of abiraterone, enzalutamide, and apalutamide. These trials have resulted in the following clinical outcomes:

Dr. Taplin discussed several important ongoing neoadjuvant trials. First, the Proteus trial is a randomized, double-blind, placebo-controlled, phase 3 study of apalutamide in subjects with high-risk, localized, or locally advanced prostate cancer who are candidates for radical prostatectomy. Patients are randomized to 6 months of apalutamide + ADT versus placebo + ADT followed by radical prostatectomy and 6 months of additional therapy (based on what they received prior to radical prostatectomy) post-operatively. The primary endpoints are pathologic complete response and metastasis free survival, and key secondary endpoints are PSA-free survival and progression free survival. The study schema for Proteus is as follows:

Second, the GUNS trial is a multi-arm, multi-stage adaptive trial in biomarker selected patients with high-risk localized prostate cancer. The primary endpoint of this trial is pathological complete response rate and the trial schema is as follows: 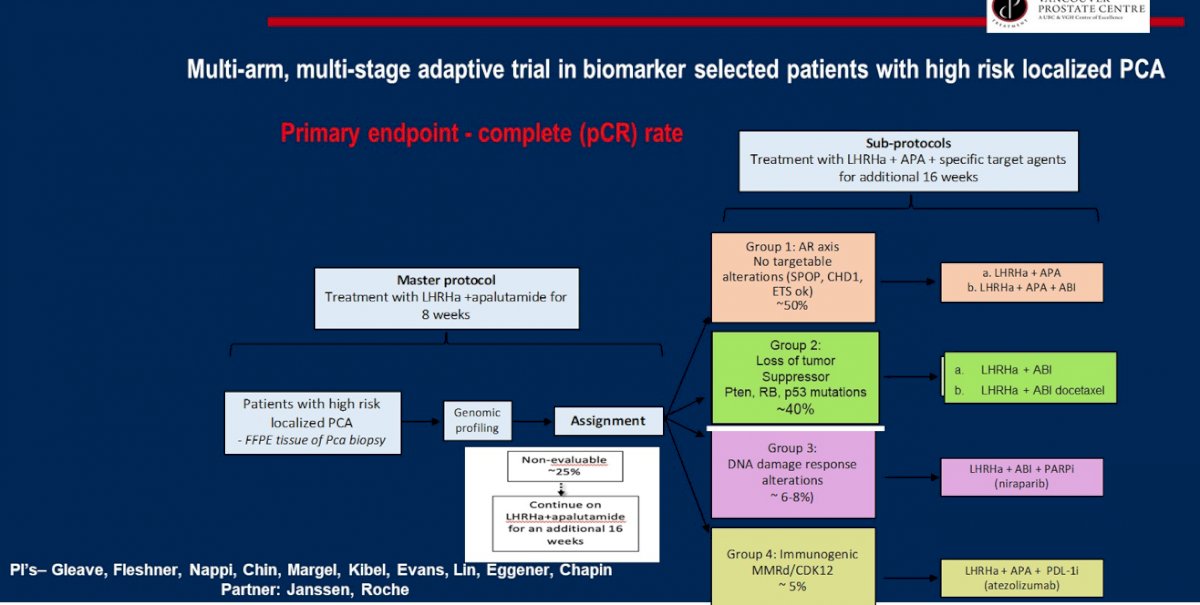 Dr. Taplin then discussed several important ongoing trials in this disease space. First, a randomized phase 3 study assessing conventional ADT with or without abiraterone acetate + prednisone and apalutamide following a detectable PSA after radiation and ADT. Of note, inclusion requires any PSA > undetectable after radiation and at least 6, but not more than 8 months of conventional ADT in patients with non-metastatic high-risk or N1 prostate cancer. The trial schema is as follows:

Dr. Taplin concluded her presentation by highlighting several key trials assessing adjuvant systemic therapy after radical prostatectomy. The ERADICATE trial is assessing radiotherapy for Decipher > 0.6, treating these patients with ADT +/- darolutamide. The trial schema for ERADICATE is as follows: 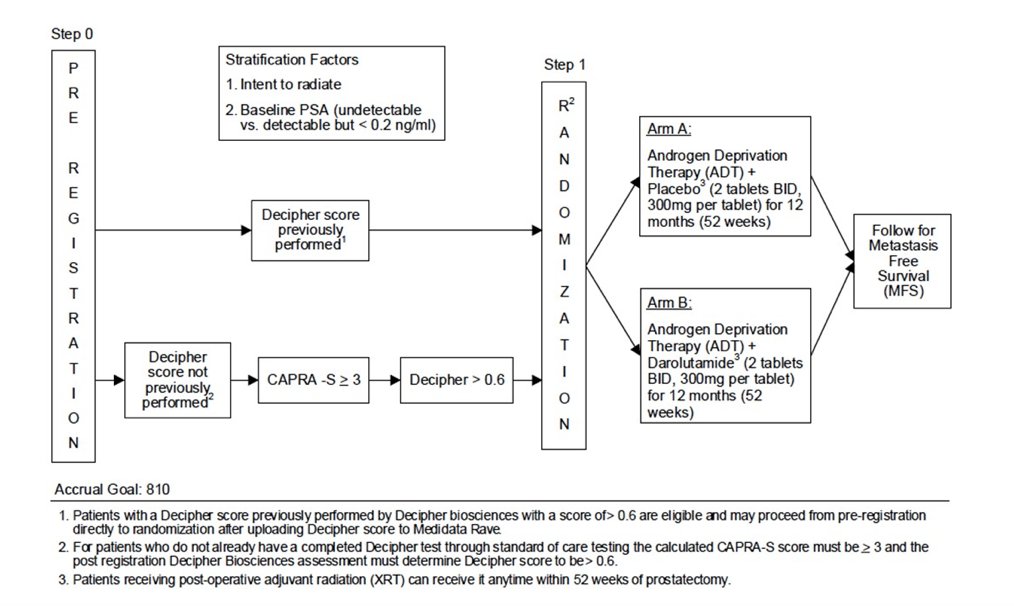 Second, the INNOVATE is for pathologic node positive prostate cancer with a rising PSA, randomizing patients to standard of care + ADT versus standard of care + ADT + apalutamide. Notably, patients must be pN1 with a detectable PSA after radical prostatectomy and prior negative Axumin, F-18, or Ga-68 PSMA PET within 90 days documenting no distant metastatic disease. The primary endpoint is metastasis-free survival. The trial schema for INNOVATE is as follows. 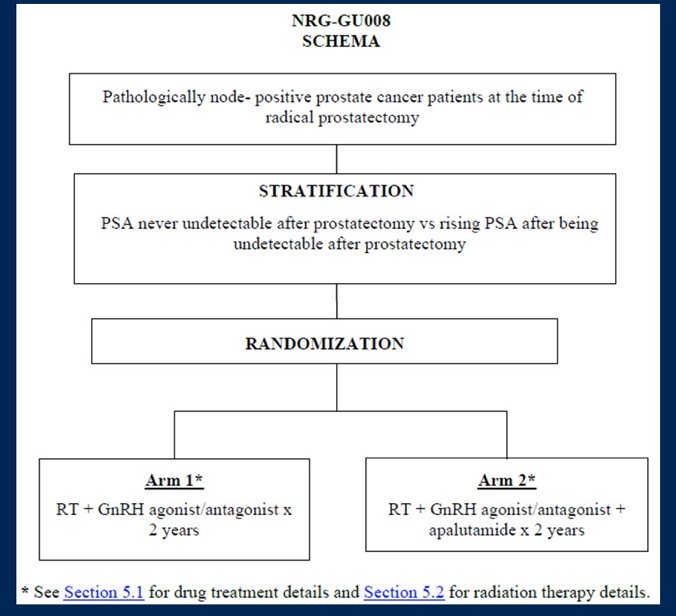 Third, the DASL-HiCaP trial is an ANZUP-led, randomized, phase 3, placebo-controlled, double-blind international trial for men planned for radiotherapy who have very high-risk localized prostate cancer on conventional imaging, or very high-risk features with PSA persistence or rise within one year following radical prostatectomy. The trial is stratified by: radical prostatectomy, use of adjuvant docetaxel, and pelvic nodal involvement. The goal is inclusion of 1,100 participants who will be randomized to darolutamide 600 mg or placebo twice daily for 96 weeks in combination with standard of care: LHRHa for 96 weeks, plus RT starting week 8-24 from randomization.