(UroToday.com) The 2022 GU ASCO Annual meeting included a session on the optimization management of localized prostate cancer, specifically looking at artificial intelligence (AI), active surveillance, and intervention, featuring a presentation by Dr. Daniel Spratt discussing an AI-derived digital pathology-based biomarker to predict the benefit of ADT in localized prostate cancer with validation in NRG/RTOG 9408. The current standard of care for men with intermediate- and high-risk localized prostate cancer treated with radiotherapy is the addition of ADT.

Dr. Spratt notes that biomarkers are either prognostic or predictive. Prognostic biomarkers estimate the absolute risk of recurrence and personalize treatment through avoiding futile treatment intensification. Predictive biomarkers identify the relative impact of a given therapy and personalize treatment decisions irrespective of prognosis. Presently, there are no validated predictive biomarkers to guide ADT use or duration in such men. However, there is a wealth of unused biological information unrecognized in prostate cancer histopathology. Using AI may identify non-human interpretable features to enable the creation and validation of the first predictive biomarker to guide ADT use in localized prostate cancer.

For this study, pre-treatment biopsy slides were digitized from five phase III NRG Oncology randomized trials of men receiving radiotherapy with or without ADT. The training set to develop the AI-derived predictive biomarker included NRG/RTOG 9202, 9413, 9910, and 0126, and was trained to predict distant metastasis. A multimodal deep learning architecture was developed to learn from both clinicopathologic and digital imaging histopathology data and identify differential outcomes by treatment type. After the model was locked, an independent biostatistician performed validation on NRG/RTOG 9408, a phase III randomized trial of radiotherapy +/- 4 months of ADT. 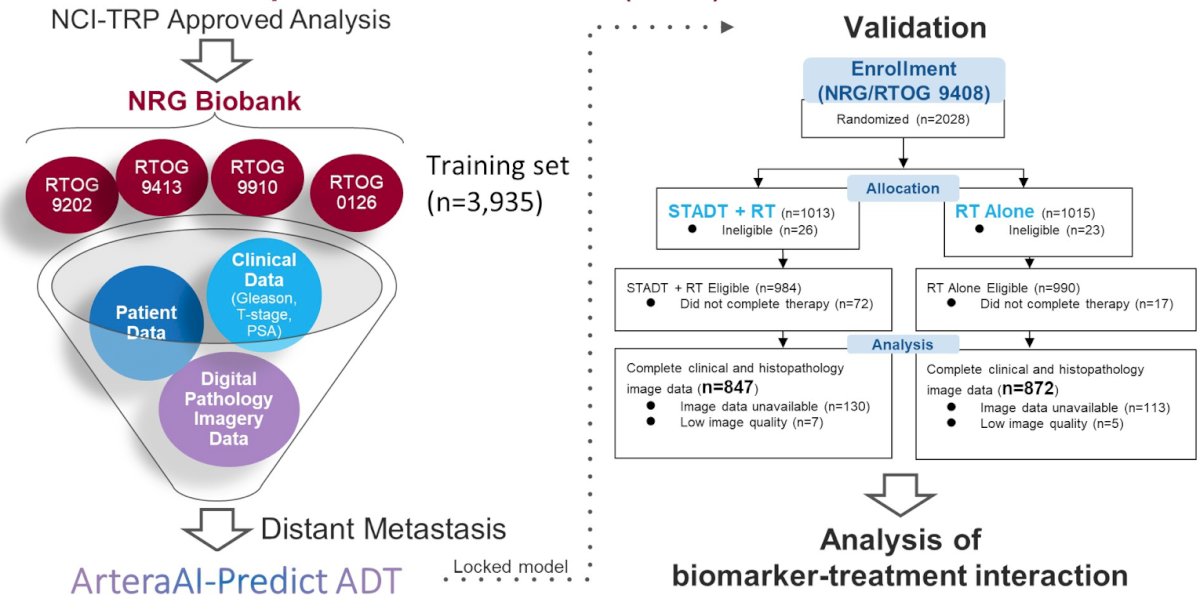 Of note, in the NRG/RTOG 9408 trial, 55% of patients had NCCN intermediate risk disease. The distant metastasis rates were calculated using cumulative incidence functions in biomarker positive and negative groups, and biomarker-treatment interaction was assessed using Fine-Gray regression such that death without distant metastasis was treated as a competing event. 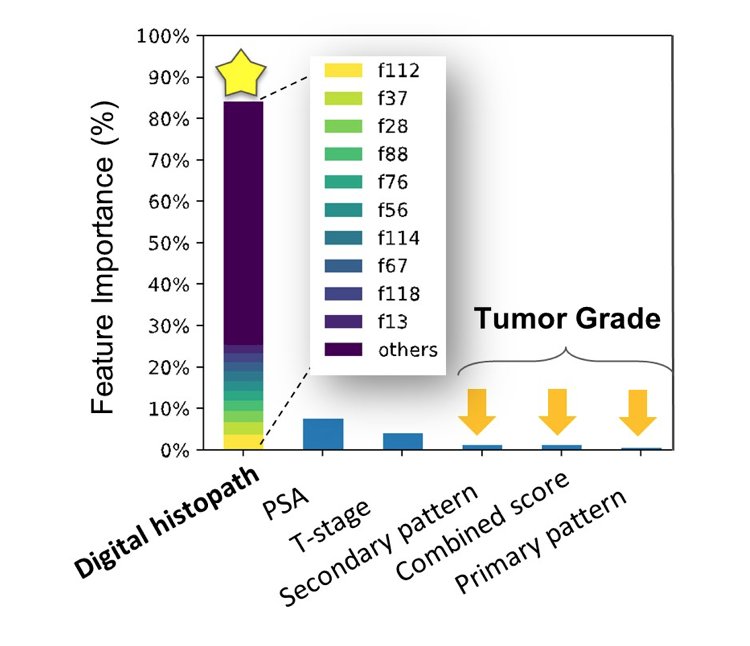 In the NRG/RTOG 9408 validation cohort that had digital histopathology data, ADT significantly improved distant metastasis (HR 0.62, 95% CI 0.44, 0.87), consistent with the published trial results. The biomarker-treatment interaction was significant (p-value = 0.0021). In patients with AI-biomarker positive disease (n = 673, 39%), ADT had a greater benefit compared to radiotherapy alone (HR 0.33, 95% CI 0.19, 0.57). In the biomarker negative subgroup (n = 1046, 61%), the addition of ADT did not improve outcomes over radiotherapy alone (HR 1.00, 95% CI 0.64, 1.57). The 15-year distant metastasis rate difference between radiotherapy versus radiotherapy + ADT in the biomarker negative group was 0.4% vs biomarker positive group 9.8%. There was a consistent differential benefit seen by the biomarker score across all endpoints:

Dr. Spratt concluded his presentation of an AI-derived digital pathology-based biomarker to predict the benefit of ADT in localized prostate cancer with validation in NRG/RTOG 9408 with the following summary points: