(UroToday.com) On the first day of the American Society for Clinical Oncology (ASCO) Genitourinary Cancer Symposium 2022, Poster Session A focussed on the care of patients with prostate cancer. Dr. Armstrong presented a poster describing a post hoc analysis of the ARCHES trial aimed at assessing differences in response to enzalutamide for metastatic hormone-sensitive prostate cancer (mHSPC) on the basis of disease volume and synchronicity.

The ARCHES trial, a phase 3 randomized controlled trial, demonstrated that the combination of enzalutamide and ADT improved radiographic progression-free survival, OS, and other key secondary endpoints compared to ADT and placebo among men with mHSPC. However, whether this effect is modified by extent of disease and synchronicity may have important treatment implications.

While the design of ARCHES (NCT02677896) has previously been reported and published, to briefly summarize, it enrolled 1150 men with mHSPC and randomized them in a 1:1 fashion to receive either enzalutamide or placebo, along with ADT. Randomized was stratified by disease volume and prior docetaxel use. Following unblinding, 180 (31.3%) men initially randomized to receive placebo crossed over to open-label enzalutamide. For the purpose of these subgroup analyses, high disease volume was defined per CHAARTED criteria. All men initially assess as having unknown metastatic status at the time of initial diagnosis (n=213) underwent further central chart review in order to adjudicate M0 or M1 disease. The median overall and treatment hazard ratios were estimated by Kaplan-Meier methods and Cox proportional hazards, respectively.

The authors found consistent benefits for the use of enzalutamide in addition to ADT in all disease volume and M0/M1 populations. 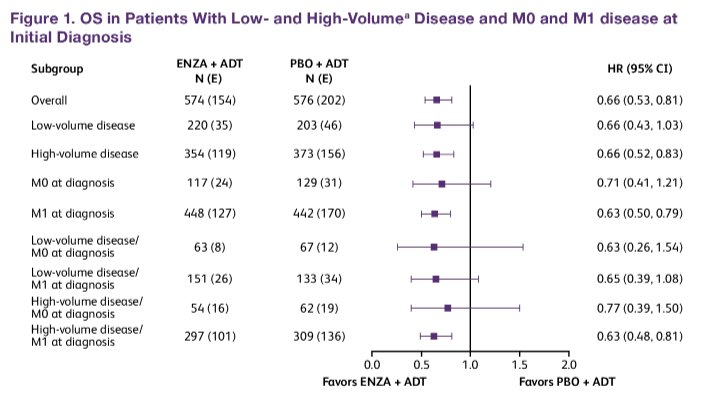 Further, even when these analyses were adjusted for the effects of cross-over, a similar pattern emerged. 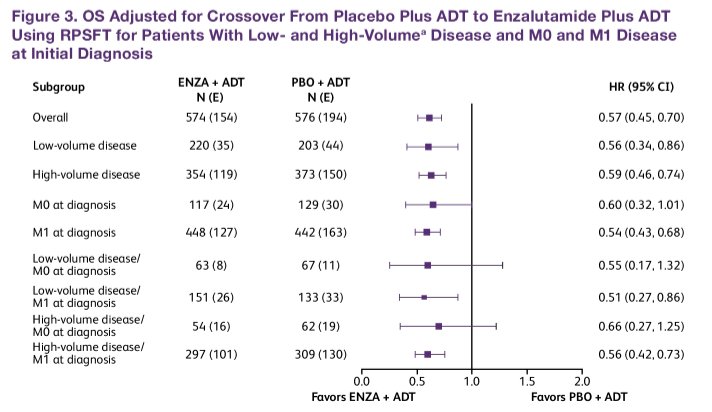 Dr. Armstrong therefore concluded that this post hoc analysis demonstrated a consistent long-term survival benefit with the combination of enzalutamide and ADT for patients with mHSPC, regardless of disease volume and de novo vs metachronous metastasis, despite substantial treatment crossover and subsequent therapy use.