(UroToday.com) The 2022 GU ASCO Annual meeting included a prostate cancer oral abstract session and a discussant presentation by Dr. Celestia Higano discussing “Phase 3 MAGNITUDE study: First results of niraparib with abiraterone acetate and prednisone as first-line therapy in patients with mCRPC with and without HRR gene alterations” presented by Dr. Kim Chi, and “PROpel: Phase III trial of olaparib and abiraterone versus placebo and abiraterone as first-line therapy for patients with mCRPC” presented by Dr. Fred Saad.

Median overall survival for abiraterone + prednisone was 34.7 months compared to 30.3 months for the placebo arm (HR 0.81, 95% CI 0.70-0.93). Dr. Higano notes that overall survival was reported 5 years after the trial started and that rPFS was consistent and highly associated with overall survival.

With regards to the current landscape of first line therapy for mCRPC, since abiraterone + prednisone and enzalutamide single agent trails were reported, the median overall survival of first line therapy for these patients has not improved. Subsequent developments have included (i) PARP inhibitors, (ii) finding that 25-30% of mCRPC patients harbor HRR mutations, and (iii) preclinical data demonstrated that androgen receptor signaling regulates DNA repair in prostate cancer.

From a global perspective, Dr. Higano highlighted that there appear to be several similarities between PROpel and MAGNITUDE. Both trials:

However, Dr. Higano notes that these are quite different clinical trials.

A stratified clinical trial design can look at treatment effects within each biomarker and across groups. However, a formal statistical test must be done to look at the interaction between the biomarker and treatment. Disadvantages of this clinical trial design include the large sample sizes required and the potential for overtreatment of metastasis negative patients.

In the HRR biomarker negative cohort, the preplanned futility analysis showed no benefit of adding niraparib to abiraterone acetate/prednisone in the prespecified composite endpoint (first of PSA progression or rPFS: HR 1.09, 95% CI 0.75-1.59): 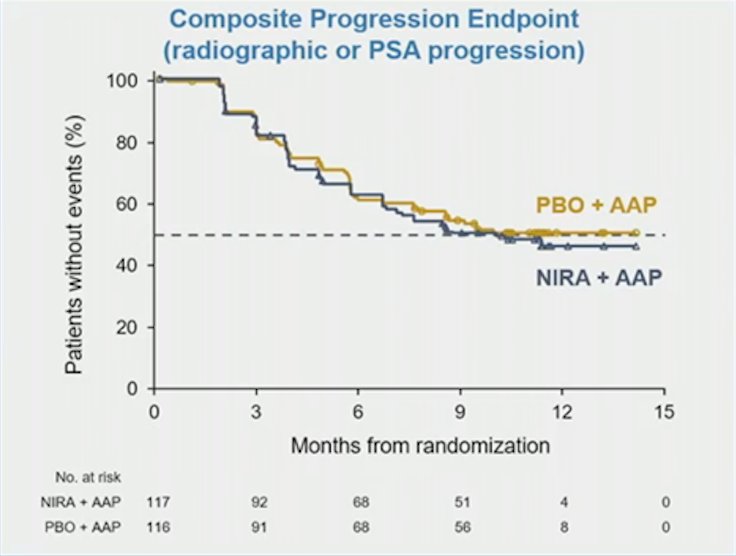 Dr. Higano highlighted that there was additional grade 3/4 toxicity observed using abiraterone acetate/prednisone or placebo + abiraterone acetate/prednisone and that based on futility in the HRR biomarker negative cohort, the IMDC recommended stopping enrollment. When breaking down the composite endpoints in this cohort, there was no signal for benefit at all based on 83 PSA events (HR 1.03, 95% CI 0.67-1.59) and 65 rPFS events (HR 1.03, 0.63-1.67).

Dr. Higano notes that when looking at the population of patients in each trial, there are several differences, particularly with regards to not specifying BRCA 1/2 patients in the PROpel trial:

So, is rPFS a surrogate for clinical benefit in mCRPC? Clinical benefit can be defined as prolonged overall survival and/or improved quality of life, however overall survival in these trials is not mature. Quality of life appears stable in both trials compared to baseline. In MAGNITUDE, patients had a BPI <=3, so there was not much room for improvement but there was no deterioration. In PROpel, 20-25% of patients were symptomatic (BPI >4), but quality of life was stable.

Dr. Higano concluded her discussion of the PROpel and MAGNITUDE trials with the following take-home messages: