(UroToday.com) On the first day of the American Society for Clinical Oncology (ASCO) Genitourinary Cancer Symposium 2022, Poster Session A focussed on the care of patients with prostate cancer. Dr. George presented subgroup analyses from the HERO trial of relugolix in advanced prostate cancer, examining for effect modification by patient race. It is well recognized that the burden of prostate cancer disproportionally falls on Black men, particularly in the United States. Thus, the authors were interested in performed subgroup analysis among Black men enrolled in the HERO trial, which demonstrated superior continuous suppression of testosterone to castrate levels with relugolix, a once-daily oral GnRH receptor antagonist, compared to leuprolide.

While previously reported and published, to briefly summarize, HERO was a phase 3 randomized, open-label, study that compared relugolix to leuprolide in 930 treated men with advanced prostate cancer. The present subgroup analysis included all Black men enrolled in the HERO study. The authors considered both primary and secondary endpoints from the HERO trial including sustained testosterone suppression to castrate levels (<50 ng/dL) from day 29 through 48 weeks, early testosterone suppression to castrate levels (day 4 and day 15), PSA response (>50% decrease) at day 15 with confirmation at day 29, profound castration rate (<20 ng/dL) at day 15, and FSH level at the end of week 24.

Among the 930 men enrolled on HERO, 622 of whom were treated with relugolix and 308 of whom received leuprolide, 46 were Black, of whom 30 received relugolix, and 15 received leuprolide. In general, baseline characteristics were similar though a greater proportion of included Black men who received relugolix had metastatic disease at baseline (30% vs. 25%), had received prior androgen deprivation therapy (13.3% vs. 6.3%), and had previously undergone prostatectomy (53.3% vs. 18.8%). Among included Black men, the median PSA (12.8 vs. 16.0 ng/ml) and median testosterone levels (375.2 vs. 419.2 ng/dL) were lower at baseline for among those randomized to receive relugolix compared to leuprolide. 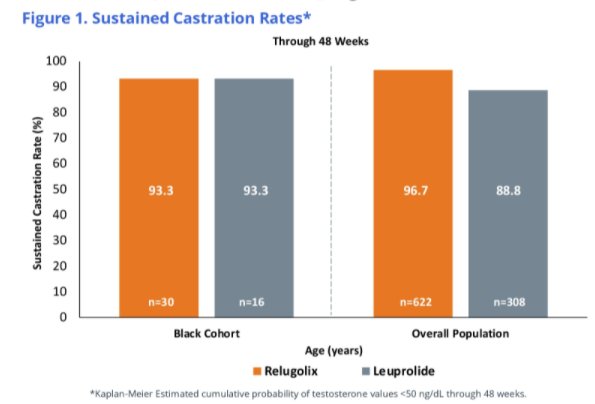 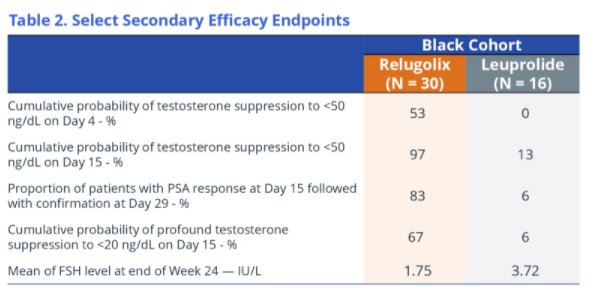 On the basis of these data, Dr. George concluded that relugolix was effective and generally well-tolerated among enrolled Black men, consistent overall study population.