(UroToday.com)  On the third day of the American Society for Clinical Oncology (ASCO) Genitourinary Cancer Symposium 2022 in a symposium focused on biomarkers and therapies in renal cell carcinoma (RCC), Dr. Vaishampayan presented on both clinical trials in first-line metastatic RCC (mRCC) and on novel pathways and endpoints for these studies.

Over the past five years, she emphasized that there have been six practice changing trials in first-line mRCC, beginning with the presentation and publication of the CABOSUN trial of cabozantinib in 2017 through KEYNOTE-426 (axitinib/pembrolizumab), JAVELIN Renal 1001 (axitinib/avelumab), and CheckMate214 (nivolumab/ipilimumab) in 2019 and CheckMate-9ER (cabozantinib/nivolumab) and CLEAR (Lenvatinib/pembrolizumab) in 2021. Compared to the historical gold standard of sunitinib, each of these studies demonstrated significantly improved treatment outcomes for these novel treatment approaches. She further highlighted data presented at ASCO 2021 demonstrating, in a real-world comparison using the FLATIRON database, relatively comparable results for axitinib/pembrolizumab and nivolumab/ipilimumab. Importantly, while developed in the tyrosine kinase inhibitor (TKI) era, the International Metastatic RCC Database Consortium (IMDC) Risk Score for RCC has been shown to retain its ability to risk stratify patients undergoing these newer treatment approaches.

Dr. Vaishampayan highlighted that, due to differences in the mechanism, comparisons of targeted therapy with TKIs and immunotherapy with immune checkpoint inhibitors can be difficult as median survival outcomes may not fully capture the effect of therapy. Additionally, particularly for patients receiving immune checkpoint inhibitors, response determination may be flawed due to pseudoprogression or stable disease. To this end, she highlighted data from CheckMate214 in which both nivolumab and ipilimumab and sunitinib treated patients had a median PFS of 12.3 months. However, given the substantially higher tail, the combined immune checkpoint inhibitor approach was, in her word, “clearly superior”. 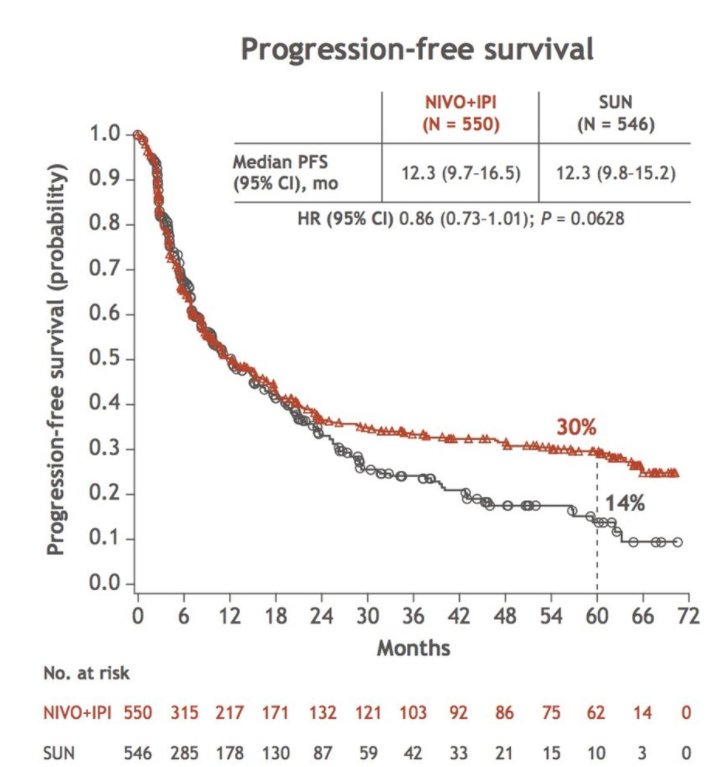 Thus, she advocated that in these comparisons, median progression-free survival, objective response rate, and tumor reduction are likely to be flawed endpoints. Instead, long-term overall survival is the preferred outcome.

Diving a little deeper in to the data beyond the combination immune checkpoint inhibitor approach, she emphasized that among patients included in the CheckMate214 trial, those who had synchronous metastasis had a median overall survival (26 months among those receiving nivolumab and ipilimumab and 14 months among those receiving sunitinib) that was 50% lower than the overall cohort (48 vs 26 months among those with intermediate-poor risk disease for patients receiving nivolumab and ipilimumab or sunitinib, respectively). Further considering the management of patients with synchronous primary and metastatic renal cell carcinoma, she emphasized that contemporary randomized trials of cytoreductive nephrectomy (CARMENA and SURTIME) did not suggest a survival benefit to resection of the primary tumor. Further, the SURTIME trial assessing sequencing suggested that initial systemic therapy followed by consolidative nephrectomy was associated with better outcomes than initial surgery. However, the role of cytoreductive nephrectomy has yet to be examined in randomized trials of patients undergoing immune checkpoint inhibitor therapy, though the SWOG 1931 (PROBE) study is to assess this question. 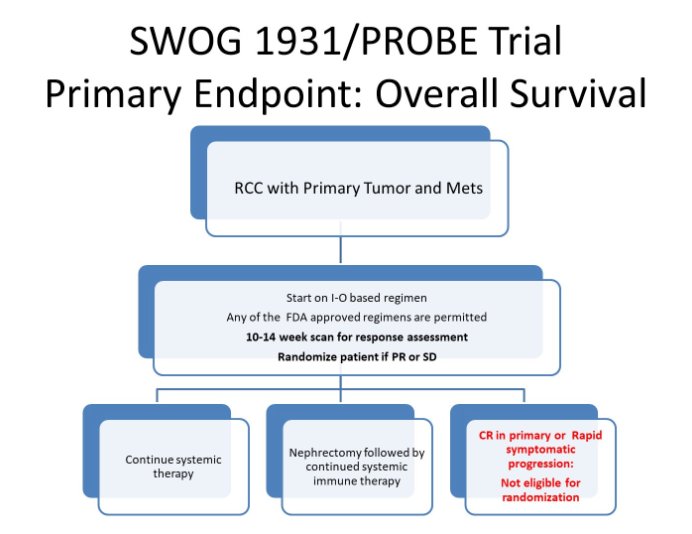 Additionally, while doublet based combination immune checkpoint inhibitor based therapy has become the standard of care in mRCC, COSMIC-313 will assess the triplet combination of cabozanitinb, nivolumab, and ipilimumab compared to nivolumab and ipilimumab. With these novel treatment approaches, she emphasized the importance of better surrogate endpoints and biomarkers to enrich the patient population.

She emphasized that clinical and laboratory parameters, as captured in the International Metastatic RCC Database Consortium (IMDC) Risk Score for RCC has formed the backbone of risk prognostication in advanced RCC for years. The IMDC risk score includes clinical data (performance status and time from diagnosis to systemic therapy) as well as laboratory data (hemoglobin, neutrophil count, platelet count, and corrected calcium). 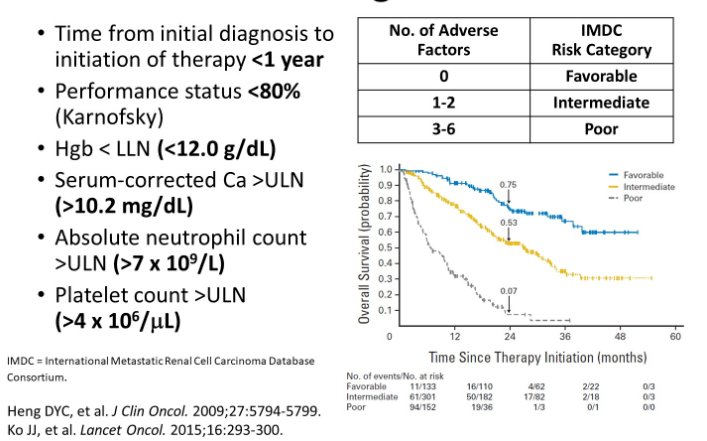 Thus, efforts to improve prognostication using biomarkers build on this backbone. Dr. Vaishampayan highlighted the myriad of genetic and genomic changes that are associated with RCC emphasizing that while many of these are prognostic, there is a lack of biomarkers to date that have demonstrated a predictive ability. 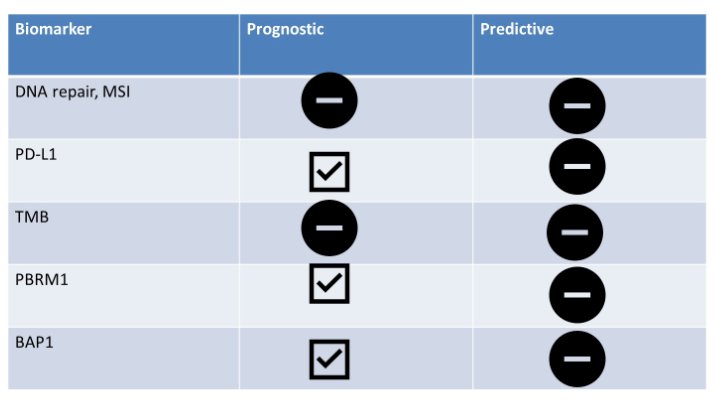 Further, she highlighted the paradox in RCC of high immune response in patients with tumors with low tumor mutational burden (TMB). This contrasts with other tumor types in which TMB is predictive of response to immune checkpoint inhibition.

Dr. Vaishampayan then considered novel therapeutic targets and agents in advanced RCC. The first of these is Nektar-214, which biases signaling to favour the CD122 receptor eliminating overactivation of the IL-2 pathway and achieving an antibody-like dosing schedule. The combination of the Nektar-214 inhibitor bempegaldesleukin with nivolumab is being tested in advanced RCC in the PIVOT-09 trial. Further, ARTISTRY-1 is testing nemvaleukin monotherapy or combination therapy with pembrolizumab in patients with refractory solid tumors including RCC. Nemvaleukin, ALKS 4320, is a novel, engineered cytokine which selectively binds the intermediate-affinity IL-2Ralpha expressed on CD8+ T cells and natural killer (NK) cells.

Further, based on work elucidating the pathways of clear cell RCC carcinogensis, the HIF-2alpha inhibitor belzutifan has recently demonstrated benefit among patients with von Hippel-Lindau disease. In a phase I/II trial of patients with advanced ccRCC, the objective response rate to belzutifan was 25%. She further highlighted alternative approaches to targeting the HIF pathways including ARO-HIF2, an RNA interference (RNAi) therapeutic. To date, early studies of this approach have assessed dose escalation in two cohorts totally 17 patients. Among 9 evaluatble patients, 7 had reductions in HIF-2alpha and one of 10 patients in cohort 2 who received a 525mg weekly dose had a partial response. As a result, a third cohort is enrolling to receiving 1050mg weekly.

Dr. Vaishampayan highlighted TGF-beta as another novel target in the armamentarium for RCC. TGF-beta inhibition attenuates the invasive capacity of RCC and may be a pathway of immune resistance. Further, there is extensive overlap between the TGF-beta response and genes responsible for the HIF pathway. Thus, combination therapeutic approaches may be particularly useful here. She further noted XL092, an ATP-competitive inhibitor of multiple receptor kinases (including MET, VEGFR2, AXL, and MER) as a novel treatment approach that is currently being investigated in the STELLAR001 trial.

Considering the personalization of therapy, she emphasized work from Dr. Motzer and colleagues who demonstrated that genomic profiling of advanced RCC demonstrates 7 distinct subtypes which differential prevalence of alterations in PBRM1, KDM5C, CDKN2A/2B, and TP53 and differential responses to VEGF inhibition with or without anti-PD-L1 immune checkpoint inhibition. Thus, she suggested that the next prospective trial may be biomarker based with treatment allocation decided on the basis of genomic subtyping.

In conclusion, Dr. Vaishampayan emphasized that targeted therapy in RCC is empiric. While multiple targets have been identified to date, none are predictive of response to therapy. Immune checkpoint inhibition targeting PD-1 is now the backbone of management of RCC and multiple immune checkpoint based combination therapy approaches are currently being tested. Other novel targeted therapies are also under evaluation with future trials likely (hopefully!) utilizing biomarker based randomization.