(UroToday.com) On the third day of the American Society for Clinical Oncology (ASCO) Genitourinary Cancer Symposium 2022 in a symposium focused on biomarkers and therapies in renal cell carcinoma (RCC), Dr. Kim provided an update on clinical trials in adjuvant therapy for renal cell carcinoma (RCC). He began by highlighting examples of patients at high-risk for recurrence following nephrectomy. This includes those with high-grade, locally advanced, and node-positive disease.

Moving next to TKIs, Dr. Kim highlighted that the NCCN guidelines recommend sunitinib, as a category 3 recommendation, or pembrolizumab as adjuvant therapy for patients with stage III disease. This is, in large part, based on data from S-TRAC which formed the basis for FDA approval of sunitinib in this disease space. S-TRAC demonstrated a 24% improvement in disease free survival (hazard ratio 0.76, 95% CI 0.59-0.98) for patients receiving adjuvant sunitinib, compared with placebo. Further, this trial failed to demonstrate an overall survival benefit. Notably, adjuvant sunitinib was associated with significant toxicity: 48.4% of patients experienced grade 3 adverse events and 12.5% experienced grade 4 events.

Additionally, there are a number of other trials of TKIs in this setting which have not shown such a benefit. In the ASSURE trial, there was no significant benefit for 1-year of either adjuvant sunitinib (HR 1.17, 95% CI 0.90-1.52) or sorafenib (HR 0.98, 95% CI 0.75-1.28) compared to placebo. The SORCE trial which examined sorafenib for either 1 or 3 years, PROTECT which examined 1 year of pazopanib, and ATLAS which examined axitinib for 1 to 3 years all failed to demonstrate a benefit to this approach and further showed evidence of significant toxicity. 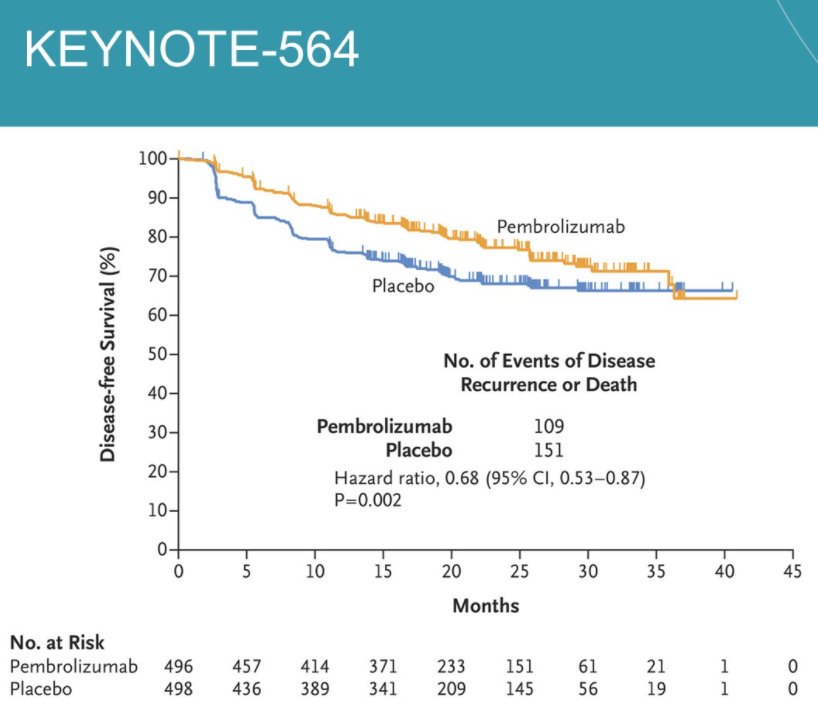 Further, Dr. Kim noted that this benefit was seen across nearly all subgroups examined, with a particularly large benefit among patients with evidence of fully resected metastatic disease. In terms of safety, he noted that nearly one-third of the pembrolizumab group had a grade 3 adverse event and nearly 21% discontinued pembrolizumab due to toxicity, though there were no deaths attributable to pembrolizumab. In considering how to apply these data to practice, he emphasized that the inclusion criteria of KEYNOTE-564 included patients with clear cell histology who were deemed at high risk on the basis of either grade 4 or sarcomatoid histology among those with T2 diseaes, T3 or T4 disease, node positive disease, or metastatic disease who were rendered surgically with no evidence of disease (NED) within one year of nephrectomy.

To date, the overall survival analysis of KEYNOTE-564 is immature with 18 deaths in the pembrolizumab arm and 33 in the control arm, 26% of the total deaths expected for the final analysis. Currently, in the context of adjuvant immune checkpoint inhibitor therapy, Dr. Kim’s “wish list” includes a proven survival benefit demonstrated consistently in multiple trials. Until such time, he advocated that trials continue to have placebo or observation control arms.

In that context, he highlighted currently ongoing trials of adjuvant immune checkpoint inhibitor therapy including IMmotion010 which uses a classic adjuvant design to assess atezolizumab and PROSPER which use both neoadjuvant and adjuvant nivolumab.

Building off the results of KEYNOTE-564 which established pembrolizumab as adjuvant therapy, the Litespark trial will compare pembrolizumab monotherapy with a combination approach using the HIF-2alpha inhibitor belzutifan.

In conclusion, Dr. Kim highlighted that adjuvant pembrolizumab or sunitinib may be considered for patients with clear cell RCC at high risk of recurrence after surgery. However, no approach has demonstrated an overall survival benefit and the overall evidence for adjuvant therapy in non-clear cell histology is very weak.