(UroToday.com) On the second day of the American Society for Clinical Oncology (ASCO) Genitourinary Cancer Symposium 2022, Dr. Sophia Kamran presented in a session highlighting novel therapies in bladder cancer and their toxicities, discussing the role of bladder-sparing trimodality therapy with a focus on toxicity and functional outcomes.

Dr. Kamran began by emphasizing the three key components of trimodal therapy as practiced to date, including transurethral resection of the bladder tumor (TURBT), radiotherapy, and chemotherapy. This approach has been investigated in a number of RTOG-led trials evaluating the use of trimodality therapy including 8802, 8903, 9506, 9706, 9906, and 0233 which have demonstrated long-term disease-specific survival that is comparable (though not compared within study) to modern cystectomy series. Further, the Massachusetts General Hospital (MGH) experience has shown improvements in techniques over the years, as well as improvements in patient selection over time, has led to gradual improvements in patient outcomes and a decreasing need for salvage cystectomy.

In terms of late toxicity, she highlighted data from RTOG 8903, 9506, 9706, and 9906 which examined late pelvic toxicity. Among 157 patients who received combined modality treatment and survival at least two years from the start of therapy with an intact bladder, the authors examined late toxicity, beginning at least 180 days after consolidation chemoradiotherapy. With a median follow-up of 5.4 years, 11 patients (7%) had late grade 3 or greater pelvic toxicity, with the majority (9) being genitourinary toxicity and 3 (including one patient who also has severe genitourinary toxicity) having severe late gastrointestinal toxicity.

However, Dr. Kamran emphasized that there are many outstanding questions including radiotherapy dose, fractionation and field; the use of chemosensitizer; daily or twice daily treatment; and the role of neoadjuvant chemotherapy. However, we must also consider how we can improve the outcomes of trimodal therapy. Immune checkpoint inhibitors have shown benefit across numerous disease states in patients with urothelial carcinoma including in BCG-refractory non-muscle invasive disease, in the adjuvant setting following radical cystectomy, and in patients with advanced or metastatic disease. She further emphasized that there is an underlying rationale for combining radiotherapy with immune checkpoint inhibition given the neoantigen load related to radiotherapy. To date, there are limited data. However, a phase Ib study of 6 patients examined concurrent durvalumab and radiotherapy followed by adjuvant durvalumab in patients with unresectable MIBC. No dose limiting toxicity was identified and a follow-up phase II trial has been launched (ECOG-ACRIN/NRG 8185) which is examining durvalumab with chemoradiotherapy in patients with clinically node positive (N1-2) MIBC. Further, the SWOG/NRG 180 trial is comparing chemoradiotherapy to chemoradiotherapy with atezolizumab among patients with node negative MIBC, with the primary endpoint of bladder intact event free survival. 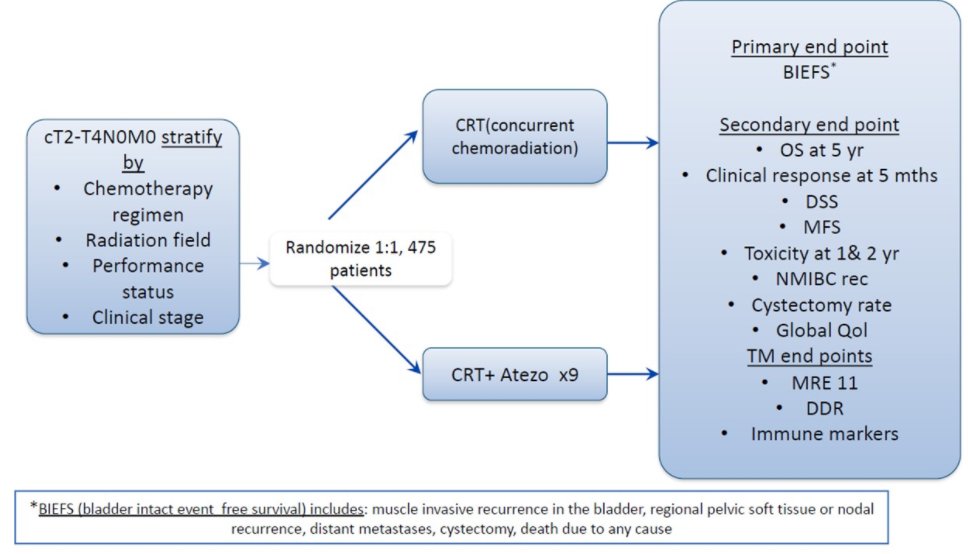 Considering other ways to advance trimodal therapy, she sounded a word of caution regarding the use of hypofractionation with immune checkpoint inhibitors. In the phase I PLUMMB trial of 36 Gy of radiotherapy in 6 weekly fractions with pembrolizumab lead-in and concurrent therapy, two of 5 treated patients had dose-limiting toxicity with severe bladder irritation which was judged to be related to treatment and led to the trial being stopped early. A separate phase I trial examining atezolizumab and gemcitabine with concurrent hypofractionated radiotherapy demonstrated frequent grade 3 toxicity [in 3 of the first 5 patients (two of which qualified as dose-limiting toxicity)], mostly related to the gastrointestinal tract. However, there are numerous ongoing studies assessing this approach.

Finally, she considered advanced techniques which may improve radiotherapy delivery. One such approach is adaptive planning which may potentially allow for dose escalation to bladder tumors and other areas at risk. This approach is currently being investigated in the RAIDER trial, which is also evaluating the role of dose-escalation with a tumor boost.

There are clearly numerous unexplored or incompletely explored paths towards personalization of radiotherapy for patients with MIBC and Dr. Kamran highlighted the role of molecular profiling and computational and functional analyses to inform radiotherapy treatment planning and the use of concurrent systemic agents.