(UroToday.com) On the second day of the American Society for Clinical Oncology (ASCO) Genitourinary Cancer Symposium 2022 focusing on urothelial carcinoma, Dr. Samuel Washington discussed race and gender disparities in the management of patients with bladder cancer, in a session focused on a Potpourri of Hot Topics in Urothelial Carcinoma.

Dr. Washington began by defining social determinants of health and healthcare disparities. He highlighted differing definitions. The Centers for Disease Control and Prevention (CDC) considers these to be considerations in the places where people live, learn, work, and play that affect a wide range of health and quality-of-life risk and outcomes. While similar, the World Health Organization considers social determinants of health to be conditions in which people are born, grow, live, work, and age. These are shaped by the distribution of money, power, and resources at many levels (including global, national, and local levels) and are responsible for health inequities.

He then defined health care disparities, the differences between populations or groups of people that may be seen through comparison. While racial disparities have been the focus of much work, Dr. Washington emphasized that disparities are not limited to race or a specific group and may include age, race/ethnicity, sexual orientation, gender identity, disability, socioeconomic status, geographic location, and others. Further, there may be intersectionality between these as they do not exist in isolation. In understanding these disparities, he emphasized the importance of understanding context including healthcare and health policy, housing and residential zoning, geographic locations, and local/regional/federal policy and law.

Dr. Washington then considered disparities according to gender, a long known social determinant of health recognized by the World Health Organization as an important predictor of health care outcomes. He further emphasized that gender roles, norms, and behaviours (a social, rather than biologic, construct) influence how women access health services and how health systems respond to their needs.

Considering bladder cancer, there is significant sexual dimorphism, with a substantially higher incidence among men than women (3:1). However, women have delays in diagnosis and treatment which contribute to worse oncologic outcomes including higher rates of disease recurrence, greater rates of progression, and higher mortality. However, the relative contribution of biology and social constructs to these outcomes is unclear.

Certainly, there is evidence that delays in diagnosis may contribute to worse outcomes that women experience. Women have, on average, approximately two weeks longer between first noting hematuria and a bladder cancer diagnosis. This is in part attributable to an assumption that hematuria in women must represent a urinary tract infection, with women undergoing significantly more urinalyses and urine cultures prior to diagnosis and a large proportion receiving antibiotic prescriptions prior to cancer diagnosis.

Dr. Washington then considered disparities attributable to race and ethnicity. Many years ago, W.E.B. Du Bois noted that race was being used as a biologic explanation for what he understood to be social and cultural differences between populations. Thus, he suggested that race may still be a useful construct in the context of scientific research when considered as a political and social, not biological, variable. However, it is important to consider that disparities are multifactorial in etiology.

In bladder cancer, he noted that differences in presentation, diagnosis and treatment by race are well documented. Further, accounting for disease and institution, Black individuals have a 20-25% lower likelihood of receiving guideline-concordant care. However, receipt of guideline-concordant care mitigates but does not eliminate observed differences in survival. Thus, even when receiving similar treatment, Black patients experience worse outcomes than their White counterparts.

Given these disparities and many others that are beyond the scope of a single talk, Dr. Washington emphasized the importance of changing our approach. To improve cancer-related health outcomes, we must consider not just individual patient characteristics but their family and social supports, their providers, the local, state, and national health care context. This provides a context for relevant research questions and can help guide analytic plans which brining prior assumptions into question. 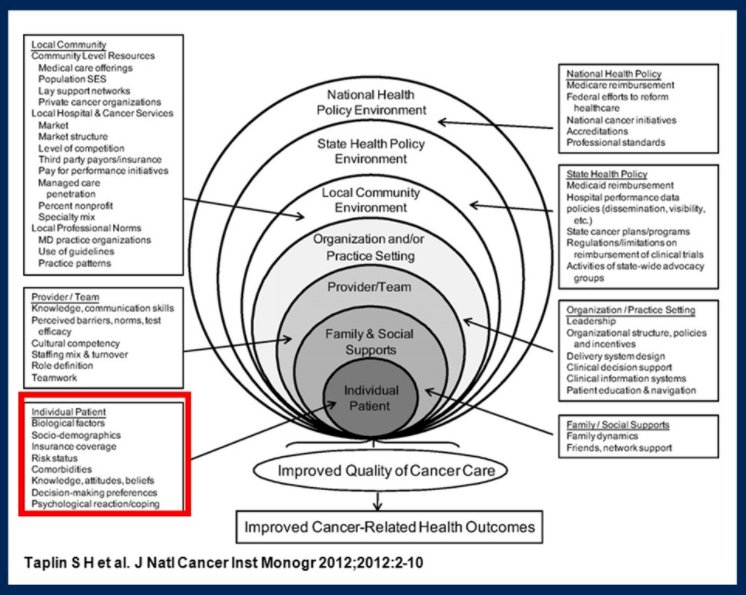 As alluded to above, Dr. Washington emphasized the importance of intersectionality which provides a theoretical framework for considering the intersection of multiple social categories (including race, ethnicity, gender, sexual orientation, socioeconomic status, and other characteristics). This approach emphasizes that social identifies are not independent and unidimensional but are multiple and intersecting. Thus, considering one identity in isolation (eg. gender) cannot fully explain unequal or disparate outcomes without considering the intersection of other identities. Attempting to understand or address health disparities via a single analytic pathway overlooks the complex ways in which multiple social categories may intersect to create disparity and social inequality.

Moving forward, he emphasized the importance of moving from documenting disparities to defining specific contexts and intersectionality with the ability to target intervention.