(UroToday.com) On the second day of the American Society for Clinical Oncology (ASCO) Genitourinary Cancer Symposium 2022 focusing on urothelial carcinoma, Dr. Zlotta presented a comparison of radical cystectomy and trimodality therapy in the treatment of patients with muscle-invasive bladder cancer (MIBC) in a session focused on a Potpourri of Hot Topics in Urothelial Carcinoma.

Dr. Zlotta began by highlighting that radical cystectomy has long been considered the traditional gold standard in the treatment of localized muscle invasive bladder cancer (MIBC). Across many tumor sites in the past few decades, there has been a paradigm shift towards organ preservation, utilizing limited resection and chemoradiotherapy, an approach deemed trimodal therapy. In the context of MIBC, trimodal therapy comprises complete transurethral resection of the bladder tumor followed by radiotherapy with chemo-sensitizing chemotherapy. This trimodal combination approach is the most robust approach to bladder preservation in patients with MIBC. However, patient selection is key. Dr. Zlotta highlighted a number of clinical features which make a patient an ideal candidate for trimodal therapy including cT2-3 disease, the absence of hydronephrosis, the lack of extensive CIS, a unifocal tumor less than 7 cm, a complete TURBT, good bladder function, and capacity, and a willingness to undergo life long follow-up with cystoscopy and imaging.

While there is a growing body of evidence to support trimodal therapy in MIBC and it is supported by several guidelines, it is not widely used. Utilization is often limited to patients with significant comorbidities for whom surgery is not feasible. One postulated reason for this lack of uptake is the lack of comparative data to the gold standard radical cystectomy. A prior randomized controlled trial (SPARE) closed early due to a lack of accrual. Thus, in the absence of randomized level 1 data, the authors used an observational comparison of matched cohorts.

The authors included 703 patients with cT2-34a/N0M0 urothelial muscle invasive bladder cancer who were eligible for both trimodal therapy and radical cystectomy, of whom 421 underwent radical cystectomy and 282 who were treated with trimodal therapy between 2005 and 2017 at Massachusetts General Hospital, Princess Margaret Cancer Center, and the University of Southern California.

Prior to matching, patients treated with radical cystectomy were significantly more likely to have hydronephrosis and to have received neoadjuvant or adjuvant chemotherapy. However, the groups were well balanced following matching. 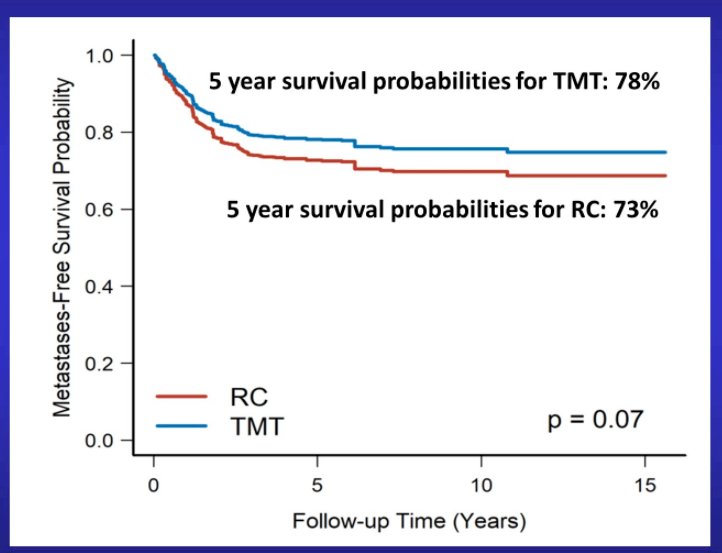 Additionally, metastasis-free survival was comparable between 128 matched pairs of patients who underwent radical cystectomy with neoadjuvant chemotherapy and trimodal therapy. The authors found comparable results when they restricted to only patients treated in Toronto.