(UroToday.com) On the second day of the American Society for Clinical Oncology (ASCO) Genitourinary Cancer Symposium 2022, the Rapid Abstract Session highlighted key abstract in urothelial carcinoma, including work by Dr. Wesley Yip and colleagues who presented results of a multicenter trial of neoadjuvant gemcitabine and cisplatin in patients with upper tract urothelial carcinoma (UTUC). UTUC is a relatively rare but deadly condition. While neoadjuvant chemotherapy (NAC) has proven survival benefits for invasive urothelial carcinoma of the bladder, it has yet to be established in UTUC where the only high quality data support adjuvant therapy. However, cisplatin eligibility declines significantly from preoperative (58%) to post-operative (15%).

Thus, the authors performed a phase II multicenter trial of NAC with gemcitabine and cisplatin (GC) in patients with high-risk UTUC prior to extirpative surgery to evaluate major outcomes of response, survival, and tolerability. The recruited patients with high-risk UTUC based on either a high-grade biopsy results or imaging findings of cT2-4a disease and positive cytology. Further, patients were required to have no evidence of metastatic disease, to have an estimated GFR of at least 55 ml/min by CKD-EPI, and a Karnofsky performance status of at least 70%. Once enrolled, patients received four cycles of GC prior to surgical resection and lymph node dissection. Patients were then followed with cytology and cystoscopy every 3 months initially followed by every 6 months and then annually. Imaging was performed every 6 months initially and then annually. The primary study endpoint was pathologic response rate (defined as < pT2N0). The authors utilized Simon’s minimax two-stage design with a 60% pathologic response rate deemed promising (thus, 28 or more responders among the targeted accrual of 54 patients). Secondary endpoints included time to disease progression (PFS), overall survival (OS), and safety and tolerability. Patients with progressive disease prior to or unable to proceed to surgery were considered treatment failures.

In the end, among 58 initially enrolled patients who received NAC, 57 underwent surgery and were evaluable for the primary endpoint. Forty patients (70%) tolerated all four cycles of GC and 89% of patients received at least three cycles. All patients proceeded to surgery.

36 patients (63%) demonstrated pathologic response, meeting the primary endpoint of the study. A complete response was noted in 11 patients (19%), defined as pT0N0. No patients experienced disease progression prior to surgery though 7 (12%) had node positive disease at surgery. The 90-day ≥ grade 3 surgical complication rate was 7.0%. 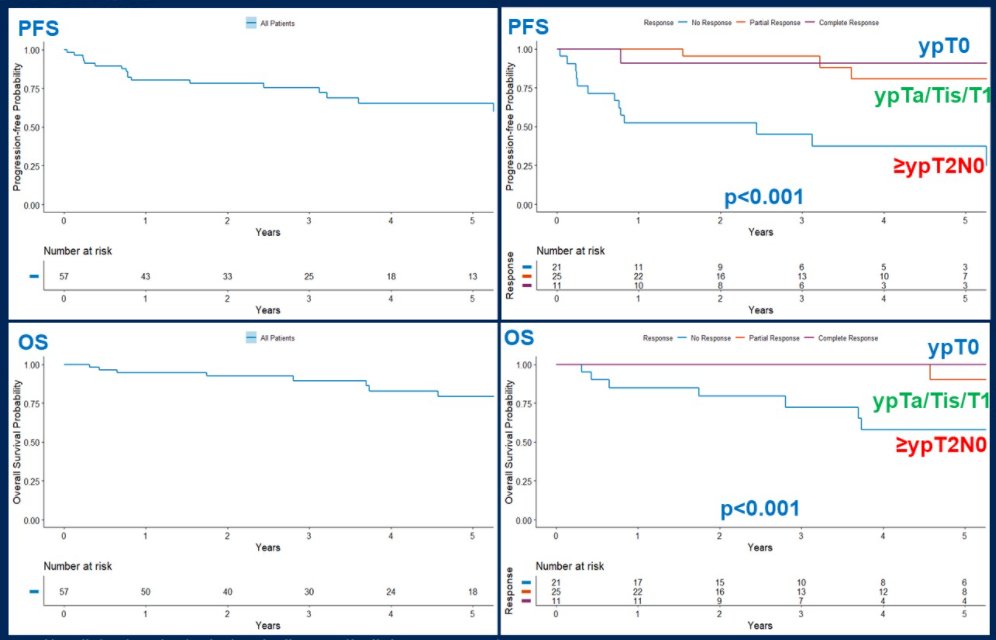 Thus, the authors conclude that this trial has demonstrated that NAC for high-risk UTUC demonstrates favorable pathologic response, is well tolerated requiring minimal delay to surgery, does not pose significant perioperative complication risk, and thus should be considered a new standard of care option for patients with high-risk UTUC.