(UroToday.com) The field of advanced prostate cancer has rapidly progressed over the past 15 years. Prior to publication of TAX-327, there were no proven life-prolonging therapies for patients with metastatic castration-resistant prostate cancer (mCRPC). Since that time, there have been many new agents that have proven survival benefits including taxane-based chemotherapy, agents targeting the androgen axis, and bone-targeting agents. In spite of castration resistance, mCRPC remains driven by activated androgen receptors and elevated intratumoral androgens. Thus, maximal androgen-axis targeting treatment may require dual inhibition of these two pathways. To this end, in a plenary abstract presentation in the Oral Abstract Session: Prostate Cancer session at the 2021 ASCO GU Cancers Symposium, Dr. Rathkopf presented results of the ACIS trial assessing the combination of apalutamide + abiraterone acetate (two approved prostate cancer treatment with distinct receptor inhibition and ligand suppression actions, respectively) as compared to abiraterone acetate alone in patients with chemo-naive mCRPC.

Between December 2014 and August 2016, the authors enrolled 982 patients and followed them for analyses of both rPFS and OS.

At baseline, the two arms were well balanced with respect to demographic and tumor characteristics. 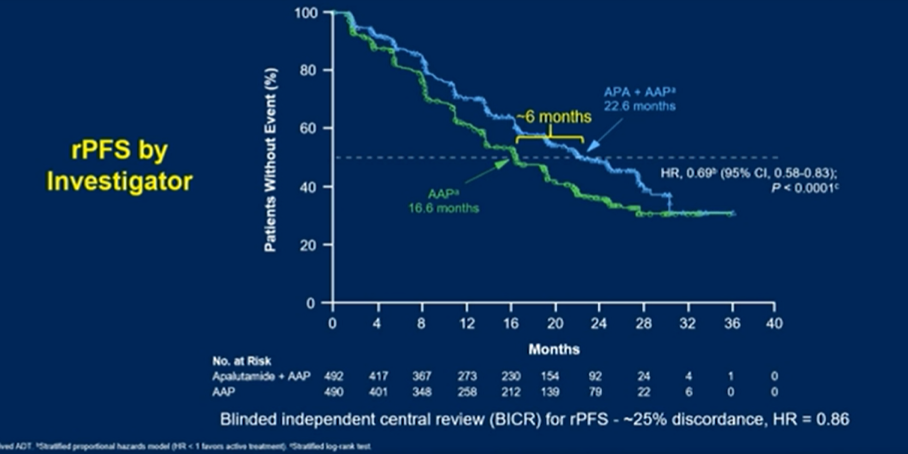 Pre-specified subgroup analyses demonstrated that the benefit of the combined approach was consistent across strata of performance status, visceral disease, geographic region, number of bony lesions, age, and PSA.

At the same time, representing the first interim analysis of overall survival at a median follow-up of 25.7 months, median overall survival was improved by 2.5 months though this was not statistically significant.

However, blinded follow-up continued. At the updated final analysis in September 2020, with a median follow-up of now 54.8 months, rPFS remained improved in patients receiving the combination approach (hazard ratio 0.70, 95% confidence interval 0.60 to 0.83) with 7.3 month improvement in median rPFS. However, at the updated final analysis, no improvement in overall survival was noted with a hazard ratio of 0.95 (95% confidence interval 0.81 to 1.11).

Other secondary endpoints including time to PSA progression, chronic opioid use, initiation of cytotoxic chemotherapy, and pain progression did not differ statistically significantly between arms.

However, PSA response rates were higher among patients receiving combination treatment. Unfortunately, this translated into only a marginal delay in PSA progression (13.8 vs 12.0 months, p=0.076).

In men who have historically had a particularly poor prognosis, namely those with visceral disease and older men, the combination approach was associated with apparent benefits in both rPFS and OS, although the statistical significance was marginal for many of these comparisons.

The use of biomarker selection with patients with PAM50 liminal and AR activity average or high appearing to derive greater benefit from the combination approach.

The majority of patients in this trial received subsequent life prolonging therapy with chemotherapy used in approximately 70% of patients in each arm.

Additionally, the authors assessed health-related quality of life finding that this was comparable between the treatment groups.