As this was a feasibility study, the authors sought to examine the composite primary endpoint of recruitment rate, technical feasibility, acute toxicity (CTCAE v4.0) and quality of life (QoL) as measured using the EPIC questionnaire. Secondary and exploratory endpoints included late toxicity (RTOG) and QoL and potential biomarkers of toxicity (plasma citrulline and DNA damage in circulating lymphocytes).

The authors enrolled men with localized prostate cancer with one of the following high-risk features T3a, Gleason score ≥4+3 or PSA>20. Patients who had T3b and T4 disease were excluded. The authors accrued a total of 30 participants who were randomized 1:1 to prostate SABR (P-SABR) or prostate and pelvis SABR (PPN-SABR). 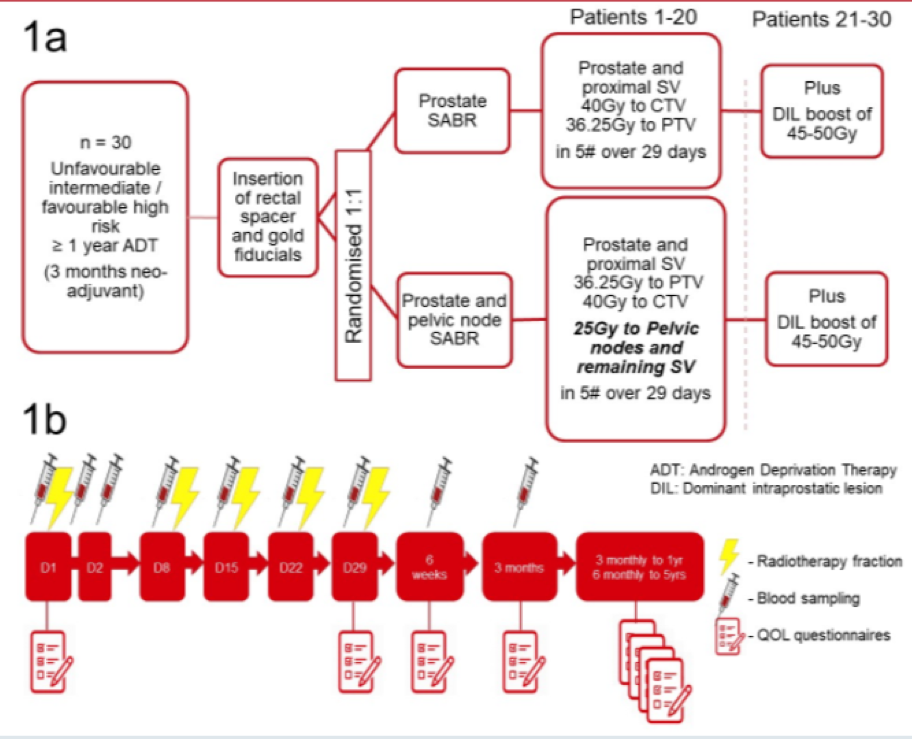 The prostate and proximal 1-2cm seminal vesicles received 36.25 Gy in 5 fractions over 29 days (prostate CTV 40Gy). The PPN-SABR arm also received 25 Gy in 5 fractions to the pelvic nodes. Prior to treatment, all patients had fiducial markers and a rectal spacer gel placed. As initial toxicity rates were low, the final 10 men received an additional integrated boost to the dominant intraprostatic lesion of up to 50 Gy, independent of the randomization arm.

The authors demonstrated the feasibility of recruitment and randomizations with the target recruitment of 30 men being met (83% high risk). Further, treatment as planned, including an integrated boost plus PNI, was achievable using strict normal tissue constraints.

The authors demonstrated acceptable levels of treatment-related toxicity with relatively low rates of acute toxicity and quality of life impairments, as highlighted in the table. 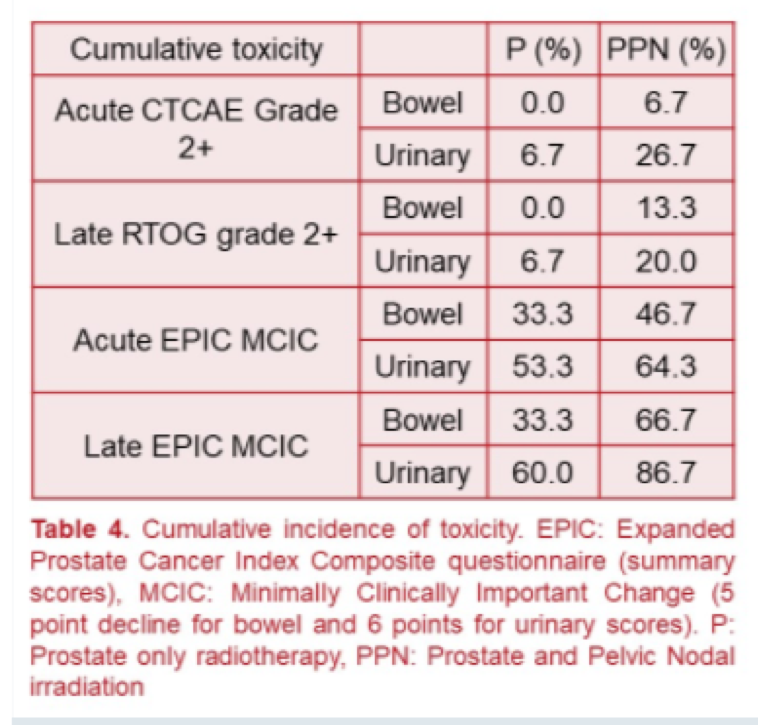 In addition to these acute events, patients were followed for a median follow up of 30 months (range 18-42 months). At this point, late toxicity and quality of life remained acceptable.

Only a single late grade 3 GU event occurred in the PPN arm. All other adverse events were grade 2 or lower.

Serum citrulline, a marker of small bowel function, trended towards lower levels in the PPN arm, in keeping with a significantly higher dose delivered to the small bowel in this arm. Additionally, ᵧH2AX foci in circulating lymphocytes increased to a greater degree in the PPN arm in the 1 hour following radiotherapy.

In conclusion, the authors demonstrated that a randomized clinical trial comparing P-SABR to PPN-SABR is feasible. These data will be used to inform a multi-center phase II trial in the UK.