(UroToday.com) The case presented was that of a 54-year-old man with an extensive family history of cancer. His mother died from ovarian cancer, his father had prostate cancer and died of colon cancer, his brother developed kidney and prostate cancer, and his sister had breast and ovarian cancer. The patient had germline testing, which revealed a heterozygous BRCA1 c.1961delA known pathogenic frameshift mutation that leads to a truncated or absent protein. The patient’s medical history was also notable for a pT1 seminoma treated with orchiectomy and radiotherapy (likely unrelated to the BRCA1 alteration) and a recent squamous cell of unknown primary in an inguinal node that was detected during his prostate cancer workup. This was treated with radiotherapy and concurrent 5FU/cisplatin.

His prostate cancer was diagnosed after his PSA uptrend from 3.6 to 6.5 over three years. He underwent a prostate MRI, which showed a PI-RADS 3 lesion in the anterior transitional zone as well as left inguinal left internal iliac adenopathy. No prostate cancer was found in the adenopathy (this led to the discovery of the squamous cell carcinoma of unknown primary). A prostate biopsy showed Gleason 3 + 4 = 7 adenocarcinoma in 5% of 1 core at the left lateral base, and Gleason 3 + 3 = 6 adenocarcinoma in 28% of 1 core from the transitional zone.

Dr. Maria Isabel Carlo, a medical oncologist, and geneticist then began discussing who should be referred for genetic testing. Per the new NCCN 2021 guidelines, any patient with a personal history of high-risk metastatic prostate cancer should be referred for genetic testing. Other indications include a family or personal history of cancer (especially if suggestive of a BRCA-syndrome with ovarian/breast/pancreatic cancer, Lynch syndrome with colorectal/upper tract urothelial/endometrial/gastric cancers, or HOXB13 associated prostate cancer), or if a tumor-only sequencing test reveals a BRCA1/2 or other suggestive mutation. Most striking for this patient is the history of breast and ovarian cancer, which would give you a high pre-test probability for germline BRCA alteration.

If a patient is found to have a germline pathogenic alteration in BRCA1/2, NCCN guidelines recommend initiating prostate cancer screening at age 40 (if BRCA2, BRCA1 is a less strong recommendation). There is no definitive evidence whether screening these patients improves clinical outcomes. The IMPACT study, which followed BRCA1/2 positive men with yearly PSA and mandated biopsy if PSA > 3.0 showed a higher incidence in Gleason 4+3 or high prostate cancers in cases relative to controls.

One question that arises from these worsened outcomes is whether patients who meet clinical criteria for active surveillance (low risk and very low risk localized disease) should be evaluated for germline BRCA or ATM alterations. Some recent data suggest that patients with these alterations have a higher incidence of disease upgrade requiring treatment earlier than non-carriers, as illustrated below.

However, there is no data regarding chemoprevention or prophylactic therapy for germline BRCA or ATM mutational carriers. Decisions on management are best made by an interdisciplinary team of specialists, including medical genetics.

Standard of care treatment for patients who require treatment is the same as non-mutation carriers. This patient elected to pursue radiation therapy for the treatment of his prostate carrier. As he had already had radiation to his pelvis bilaterally for his germ cell tumor and squamous cell cancer, he received LDR brachytherapy with no concurrent ADT. Unfortunately, he quickly developed biochemical relapse within a few months.

The discussion then shifted to Dr. Alejandro Berlin, a radiation oncologist, who was asked about whether there is any risk of increased radiotherapy toxicity including second primary malignancy in patients with germline DNA damage repair defects.

The short answer to this question is no, that BRCA germline mutations do not appear to result in increased radiosensitivity, either in the tumors that they cause or in adjacent normal tissue.  more radiosensitive. Dr. Berlin’s discussion is summarized in the slide below. 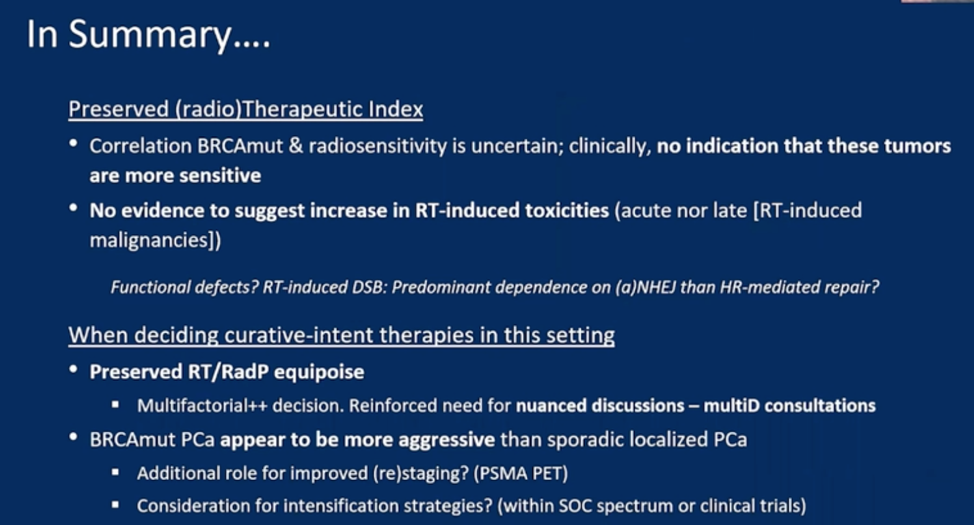 For the next discussion, Dr. Carlo discussed the management of HR alterations in mCRPC. Specifically, she touched on whether PARP inhibitors or chemotherapy should be used, if there is a difference between BRCA1 and BRCA2, and how to sequence chemotherapy versus PARP inhibition. Dr. Carlo reviewed the PROfound and TRITON2 data that led to the Federal Drug Administration (FDA) approval of olaparib and rucaparib. She discussed that BRCA2 mutations are far more common than BRCA1 mutation but making this distinction has been difficult until more recently because we did not have enough patients to study. As discussed in Abstract 135, the most benefit for PARP inhibitors is seen in BRCA2 altered disease.

Regarding platinum chemotherapy, there are only retrospective case series discussing the efficacy of this agent in tumors with DNA repair alterations. These are summarized below.