Published 12 February 2021
(UroToday.com) The 2021 American Society of Clinical Oncology (ASCO) Genitourinary (GU) Cancers Symposium included a presentation by Dr. Ashley Ross discussing the use of genomics to guide treatment decisions in post-prostatectomy patients. Dr. Ross notes that a recent systematic review assessed the clinical utility of the Decipher® genomic classifier recently published in European Urology.1 This genomic classifier assesses 22 genes representing multiple oncologic pathways, is heavily validated, and is independently prognostic of oncologic outcomes. In this systematic review, there were 42 studies and 30,407 patients included. In 32 studies (n=12,600), the genomic classifier was independently prognostic for all study endpoints (adverse pathology, biochemical failure, metastasis, and cancer-specific and overall survival) and improved the discrimination over standard of care in 24 studies (n=8,543): 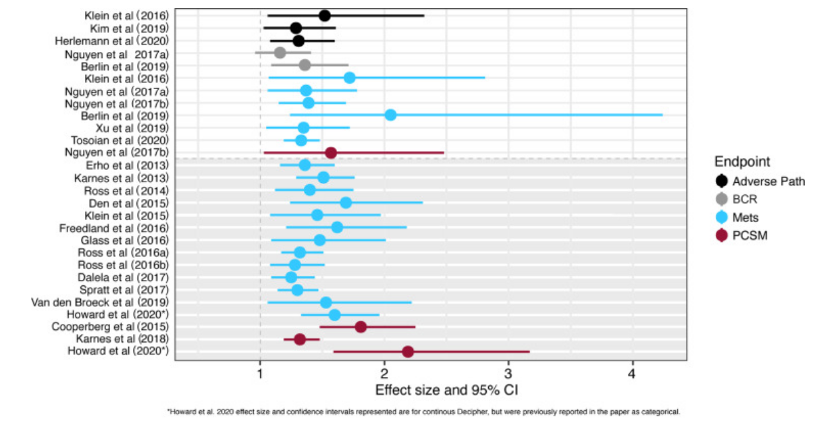 Dr. Ross notes that we now have data from three clinical trials that demonstrate that early salvage radiotherapy is preferred to adjuvant radiotherapy: RADICALS-RT, GETUG-AFU-17,2 and RAVES.3 To complement these three trials was a prospectively planned systematic review and meta-analysis of aggregate data published in The Lancet4 – a meta-analysis of these three trials. There were 2,153 patients recruited between November 2007 and December 2016, with a median follow-up ranging from 60 months to 78 months, with a maximum follow-up of 132 months. There were 1,075 patients randomly assigned to receive adjuvant radiotherapy and 1,078 to early salvage radiotherapy, of whom 421 (39.1%) had commenced treatment at the time of analysis. Based on 270 events, the meta-analysis showed no evidence that event-free survival was improved with adjuvant radiotherapy compared with early salvage radiotherapy (hazard ratio [HR] 0.95, 95% confidence interval [CI] 0.75-1.21), with only a 1 percentage point (95% CI -2 to 3) change in 5-year event-free survival (89% vs. 88%):

These three trials and the meta-analysis suggest that adjuvant radiotherapy does not improve event-free survival in men with localized or locally advanced prostate cancer. However, Dr. Ross notes that many of these trials did not include high-risk men (ie. those with seminal vesicle invasion), and thus the appropriate conclusion is that early salvage radiation should be favored among patients with pT2R1 or pT3a, GG1-3 disease. 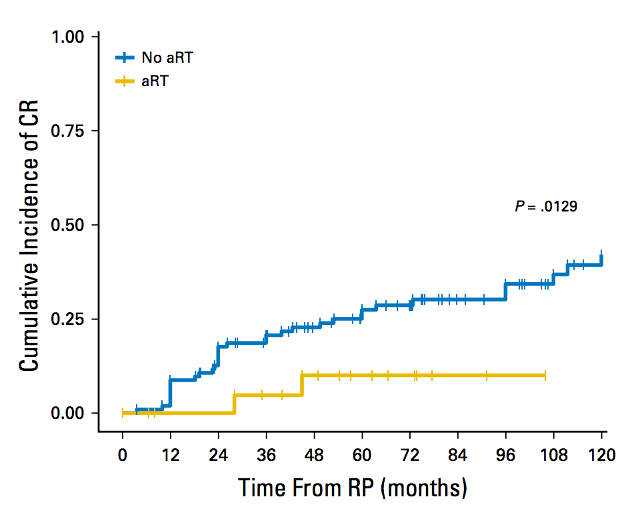 Dr. Ross notes that the use of the genomic classifier in the adjuvant setting needs further evaluation and those trials are ongoing, including the MUSIC "Genomics in Michigan Impacting Observation or Radiation (G-MINOR)" trial, and the EGOC-ACRIN "Phase III Double-Blinded Study of Early Intervention after Radical Prostatectomy with Androgen Deprivation Therapy (ADT) with Darolutamide versus Placebo" trial in men at high risk of prostate cancer metastasis by genomic stratification (ERADICATE).

One way to be more definitive as to who should receive ADT with salvage radiotherapy is with use of the Decipher® genomic classifier. Feng and colleagues6 used radical prostatectomy specimens from the Phase III placebo-controlled RTOG 9601 randomized clinical trial to generate genomic classifier scores from 486 of 760 randomized patients with a median follow-up of 13 years. On multivariable analysis, the genomic classifier (continuous variable, per 0.1 unit) was independently associated with distant metastasis (HR 1.17, 95% CI 1.05-1.32), prostate cancer-specific mortality (HR 1.39, 95% CI 1.20-1.63), and overall survival (HR 1.17, 95% CI 1.06-1.29). Additionally, the estimated absolute effect of bicalutamide on 12-year overall survival was less when comparing patients with lower vs. higher genomic classifier scores (2.4% vs. 8.9%), which was further demonstrated in men receiving early salvage radiation therapy at a PSA level lower than 0.7 ng/mL (-7.8% vs. 4.6%).

Dr. Ross concluded his presentation with the following take-home messages: