Published 11 February 2021
(UroToday.com) The TITAN randomized phase 3 study compared apalutamide to placebo in combination with androgen deprivation therapy for treatment of men with metastatic castration sensitive prostate cancer (mCSPC).1 The co-primary endpoints of the study were overall survival and radiographic progression free survival. The study schema is shown below. 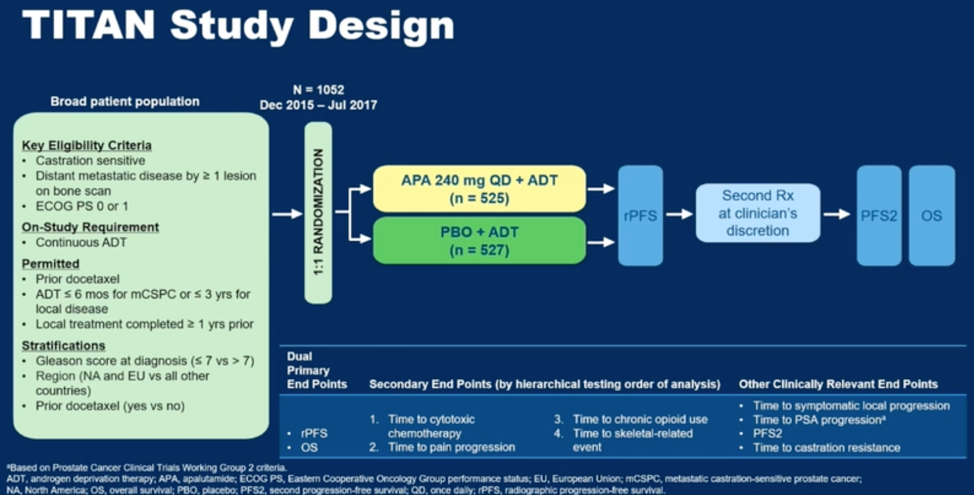 In the initial analysis presented at 22.7 months of follow-up, treatment with apalutamide resulted in a statistically significant rPFS and overall survival benefit as illustrated with the Kaplan-Meier curves below (HR 0.48 for rPFS or death, HR 0.67 for death)

The benefit of apalutamide held after a sensitivity analysis using a pre-specified inverse probability of censoring weighting method. Other endpoints such as second progression-free survival (median not reached vs 44 months in placebo), time to castration resistance (median not reached vs 11.4 months for placebo) also favored apalutamide. Subgroup analysis suggested benefit for apalutamide in almost all subgroups including both low and high-volume metastatic disease. There was a trend towards favoring placebo in patients who had received prior docetaxel, but Dr. Chi noted that this was only 10% of the trial population and a post-hoc interaction test showed not interaction between the efficacy of apalutamide and prior docetaxel.

Finally, patient report quality of life data (FACT-P total score) and cumulative incidence of side effects were roughly similar, including in the domains of falls, fatigue, fractures and serious adverse events. Apalutamide-treated patients had a higher incidence of rashes, which plateaued at just under 40% by 60 months.

Dr. Chi concluded that after approximately four years of follow-up, data confirm the survival benefit over apalutamide for men with mCSPC relative to placebo as well as in other endpoints such as time to castration resistance and was not associated with marked differences in key adverse events like falls or fatigue.

Presented by: Kim Chi, MD, FRCP(C), medical oncologist, a senior research scientist, professor of medicine at the University of British Columbia and recently named the head of BC Cancer. He is also the Co-Chair of the Genitourinary Disease Site for CCTG