(UroToday.com) Among men with metastatic castration-resistant prostate cancer (mCRPC), there is a subset who develop aggressive variant or neuroendocrine/small-cell-like (NE/SC) tumors.  These men display particularly poor outcomes. Although a field of active investigation of underlying mechanisms of development, effective therapies remain a clear unmet clinical need.  The current standard of care is typically platinum- or taxane-based chemotherapies.  The investigators conducted a single arm, two-stage phase II trial (PICK-NEPC1) to evaluate whether men these tumors respond to treatment with avelumab, a PD-L1 inhibitor.

Patients were defined either by central pathology review demonstrating histological qualification (as containing neuroendocrine or small cell features) or by aggressive variant clinical criteria (prior progression on abiraterone or enzalutamide with liver metastasis, bulky radiographic progression with a low PSA, or high serum LDH).  Prior chemotherapy was allowed.  Avelumab was administered every 2 weeks (10 mg/kg) until either progression or unacceptable toxicity.  Androgen deprivation therapy (ADT) was continued throughout).  The primary endpoint was overall response rate (ORR) as per modified PCWG3 and iRECIST criteria.

The subject with CR had de novo metastatic disease, including CNS metastases, and de novo rather than treatment-emergent NEPC. Under further investigation, his tumor was found to have somatic alteration in MSH2, with associated high microsatellite instability (MSI-H) and high tumor mutational burden (TMB), both of which can correlate with response to immune checkpoint inhibitors.  Remarkably, after 12 months of avelumab therapy, his CR has remained durable and with undetectable PSA 6 months after stopping ADT. 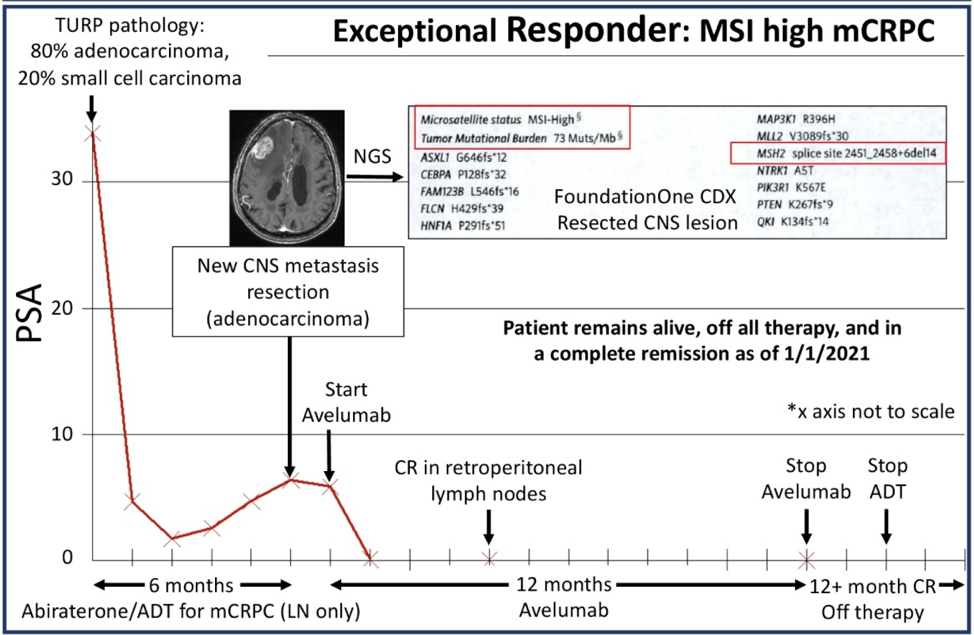 Similar to studies of pembrolizumab monotherapy (KEYNOTE-199) in non-small cell (adenocarcinoma only) mCRPC2, ORR of AVPC and NEPC was low, yet patients who do respond can have an outsized benefit.  As the authors suggest, additional investigation into mechanisms of anti-PD-L1 therapy escape in prostate cancer should be pursued.  When considering the future potential of immune checkpoint inhibition (ICI) in advanced and clinically-aggressive prostate cancer, it is worth considering the variety of tumors included, as increasing evidence supports a spectrum of plasticity from AR-positive “conventional” adenocarcinomas, through double-negative (AR-/NE-) adenocarcinomas, and to frankly neuroendocrine tumors.  Refinement of these categories and evaluation of any association with immunogenicity or TMB could increase the promise of ICI in ARPC and NEPC, either alone or in combination.