(UroToday.com) At the 2021 American Society of Clinical Oncology Genitourinary Cancers annual meeting (ASCO GU), Dr. Daniel George and colleagues presented a subgroup analysis assessing the impact of concomitant prostate cancer therapy on the safety and efficacy of the oral GnRH receptor antagonist relugolix versus leuprolide in men with advanced prostate cancer. In the phase 3 HERO study,1 relugolix demonstrated suppression of testosterone to castrate levels in 96.7% of patients, which was superior to leuprolide, with a 54% lower risk of major adverse cardiovascular events relative to leuprolide. Relugolix is a first-in-class Federal Drug Administration (FDA) approved, oral, highly selective, GnRH receptor antagonist that is given once daily with an effective half-life of 25 hours. To characterize the impact of concomitant prostate cancer treatments with the use of relugolix in advanced prostate cancer from the HERO study, a subgroup analysis for patients receiving various therapies was undertaken. The HERO study allowed concomitant treatments in patients who developed disease progression within the 48-week treatment period.

The HERO study was designed to evaluate relugolix in men with advanced prostate cancer. There were 934 patients randomized 2:1 to receive relugolix 120 mg orally once daily or leuprolide injections every 12 weeks for 48 weeks. In the setting of rising PSA, patients could receive enzalutamide or docetaxel two months after study initiation. Additionally, radiation therapy was allowed after two months of ADT. Assessments included sustained testosterone suppression to castrate levels (<50 ng/dL) through 48 weeks and safety parameters. Subgroups analyzed included patients with or without concomitant enzalutamide, docetaxel, and any radiation therapy. A sensitivity analysis of the primary endpoint was performed excluding patients who received concomitant therapies that may affect testosterone. As follows is the HERO trial design: 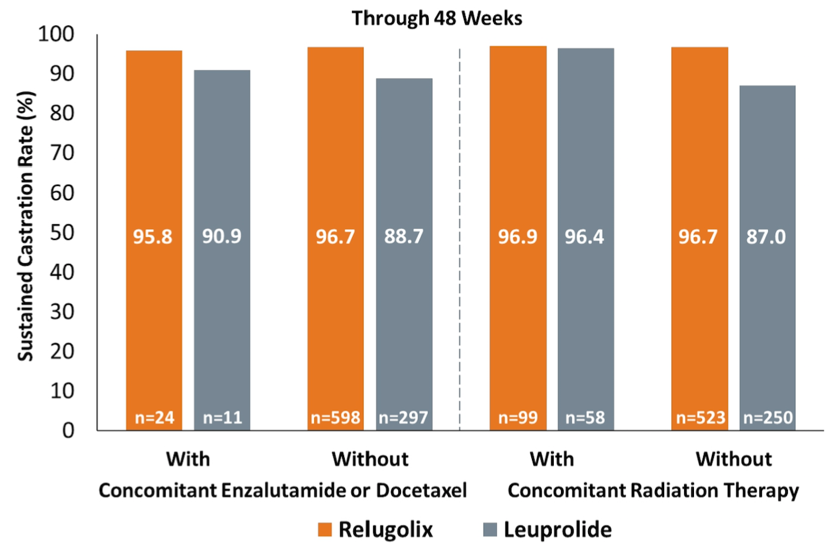 No clinically relevant differences in adverse events were observed between patients with or without concomitant use of enzalutamide, docetaxel or radiation therapy in either treatment group.

Dr. George concluded this subgroup analysis of the HERO trial with the following take-home points: