San Francisco, California (UroToday.com) The PROfound Study is the first positive randomized Phase 3 study in a molecularly-defined population of patients with metastatic castration-resistant prostate cancer (mCRPC). PROfound demonstrated that in men with mCRPC with loss of function alterations in homologous recombination repair (HRR) genes, olaparib significantly prolonged radiographic progression-free survival (rPFS) compared with physician’s choice of new hormonal agent (NHA: abiraterone acetate plus prednisone or enzalutamide). Prior taxane chemotherapy was allowed and was a stratification factor in the study.

Multiple therapy options now exist for patients with mCRPC, yet there is a paucity of data on optimal sequence of therapies. In this analysis, the investigators performed a pre-planned analysis to evaluate the efficacy of olaparib in men with HRR-deficient mCRPC based on whether or not they received prior taxane chemotherapy. 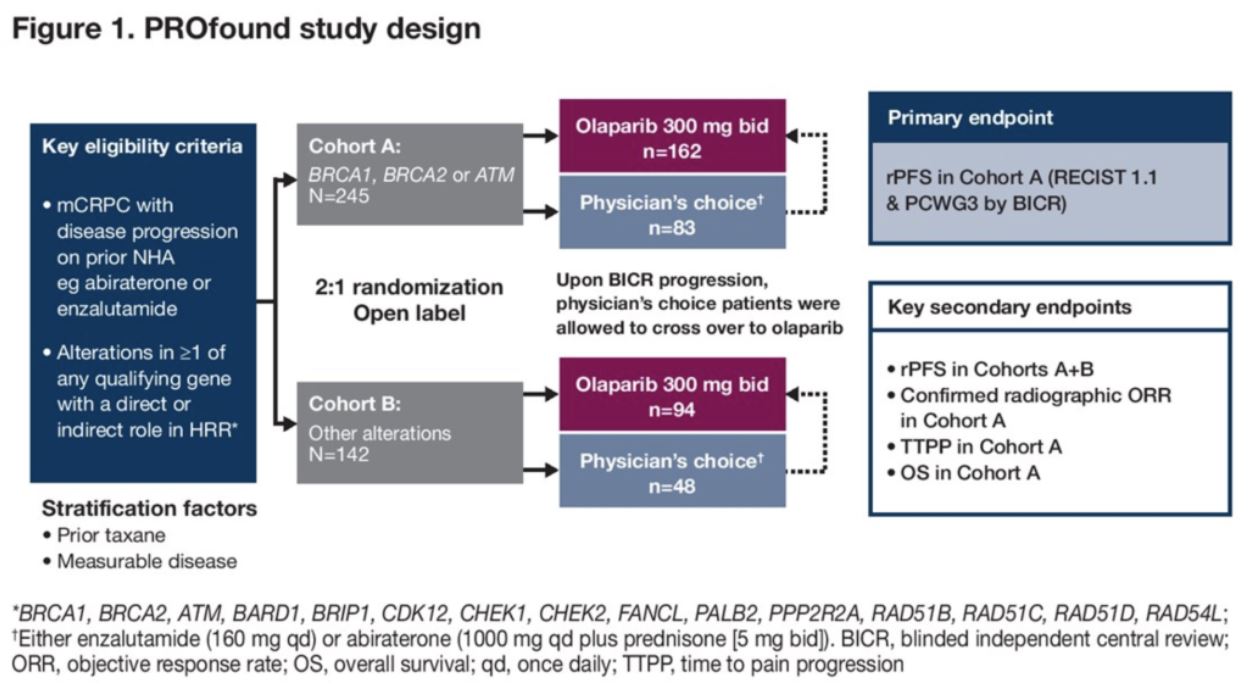 Approximately two-thirds of patients on both the olaparib and NHA treatment arms and across both Cohort A (alterations in BRCA1, BRCA2, or ATM) and Cohort A+B (alterations in any of the 15 HRR genes) received taxane chemotherapy prior to treatment in the PROfound Study. Key baseline demographics and clinical characteristics for the cohort are shown in Table 1 (below) broken down by prior taxane chemotherapy in the two treatment arms. In both arms, patients who received prior taxane therapy were younger, had slightly higher rates of visceral disease and measurable disease, and had higher PSA levels. 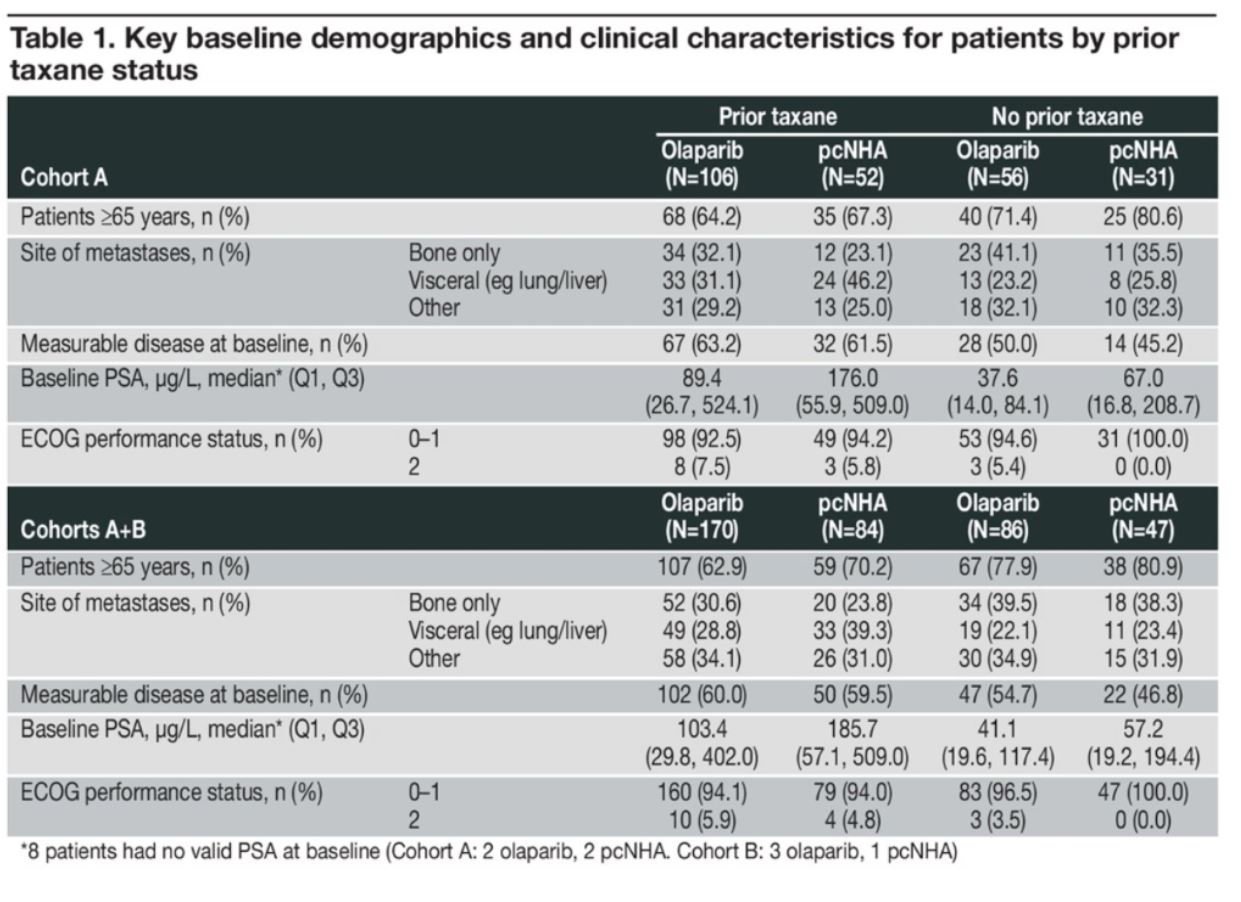 Subgroup analyses of rPFS (below) favored olaparib over NHA regardless of prior taxane chemotherapy in Cohort A and Cohort A+B. This rPFS benefit reached statistical significance (p < 0.05) in all subgroups except Cohort A+B patients who did not receive prior taxane chemotherapy. Subgroup analysis of overall survival (OS) also favored olaparib over NHA, reaching statistical significance in Cohort A and Cohort A+B patients who received prior taxane chemotherapy, but not in those who didn’t. Two important factors must be considered, however in the OS analysis. First, 82% of patients randomized to the NHA arm crossed over to olaparib at the time of rPFS, which may have confounded the OS analysis. Second, the OS data is only modestly mature with only 41% of events at the time of analysis. 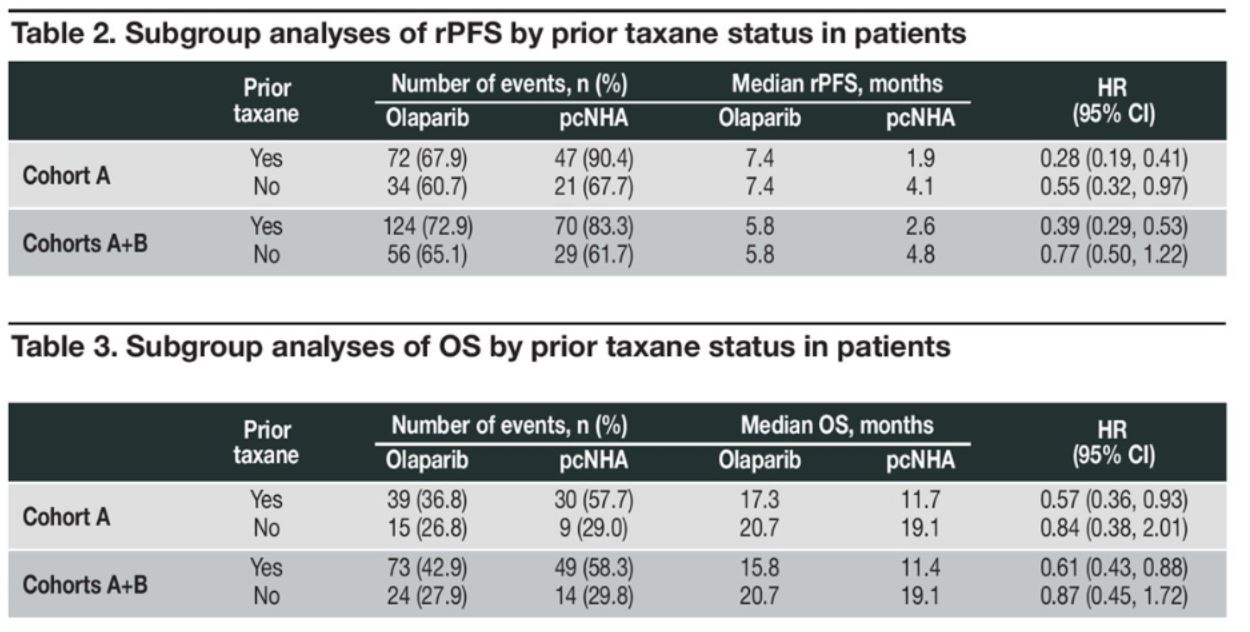 In an exploratory analysis, the investigators evaluated outcomes by gene subgroup. Patients with BRCA1/2 or CDK12 alterations both showed improved rPFS and OS for olaparib over NHA with or without prior taxane chemotherapy. Better outcomes for olaparib compared to NHA were also observed in patients with ATM alterations who received prior taxane chemotherapy, but not in those who had not. Of note, these results should be interpreted with caution due to small patient numbers and wide confidence intervals.

The investigators concluded by highlighting that although there are many effective systemic therapies in men with mCRPC, there is a paucity of data regarding optimal sequencing of therapies to guide treatment selection. In the Phase 3 PROfound Study, the benefit of olaparib over NHA was independent of prior taxane use in men with mCRPC with BRCA1, BRCA2, and/or ATM (Cohort A) and in the overall cohort of men with alterations in any of the 15 pre-specified HRR genes (Cohort A+B). These results provide insight into the benefit of olaparib for mCRPC patients regardless of prior taxane chemotherapy.